Hot Topic in the research field of superconductivity

Normally, current flowing in a metal is scattered by atoms (lattices) and impurities in crystals and is attenuated rapidly. However, current flows permanently in some metals when they are cooled to cryogenic temperatures near absolute zero (−273.15ºC). This special state, where electric resistance is zero, is called "superconductivity." Superconductivity is expected to be applied to new technologies that will bring about drastic changes in our society, such as power transmission lines with zero energy loss and large-scale electricity storage, and has already been put to practical use in some fields, such MRI. Recently, superconductors are receiving attention as quantum computer devices as well. In most cases, however, the temperature where a superconducting state is achieved (the superconducting transition temperature) is lower than the boiling point of liquid nitrogen (−196ºC), which is inexpensive, and therefore, achieving a superconducting state requires a cryogenic environment, which is expensive and is hard to handle. This is a high hurdle to overcome in the application of superconductivity. To overcome it, research is underway all over the world with the aim of developing substances with a high superconducting transition temperature and figuring out the mechanism of superconductivity. 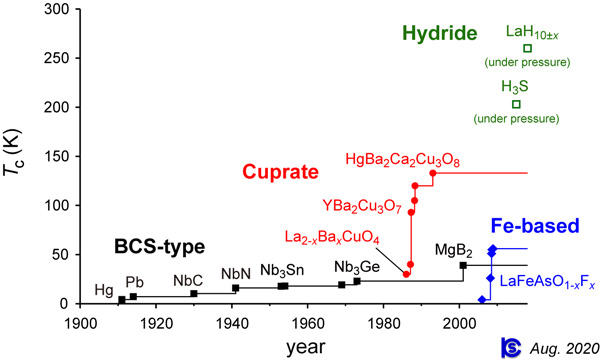 5. Figuring out the New Mechanism of Superconductivity with Rotating Magnetic Field Experiments

Many new types of superconductivity have been discovered in strongly-correlated electron systems, in which many electrons interact strongly with each other. It has been learned that, in these systems, the Coulomb repulsion between the electrons can be avoided by an unconventional pairing, in which the pairing amplitude vanishes when both electrons are on the same site. Many of such unconventional superconductors have an anisotropic superconducting energy gap, and the superconducting gap structure is a key to identifying the pairing mechanism. However, many of these new types of superconductivity have a low transition temperature of 3 K (−270ºC) or less, and difficult experiments were required to study the gap anisotropy.

We have been focusing on developing experimental techniques to identify the anisotropy in the superconducting gap based on how the amount of superconducting electrons changes under a rotating magnetic field. More specifically, we developed a calorimeter that can measure specific heat, which can be used to evaluate the amount of broken electron pairs, at temperatures as low as nearly absolute zero, or 0.04 K (−273.11ºC), and combined it with a vector magnet system that can control the direction of the magnetic field in 3D space to study the gap anisotropy with various superconductors[3][4]. As a recent result of this research, we presented experimental data showing that superconductor UTe2, which is extraordinarily resistant to magnetic fields, has gap-zero points in the a-axis direction, thereby suggesting that this superconductor has an unusual internal degree of freedom[5]. Some of the research using this system brought about discoveries that revised long-held ideas. For example, it was experimentally demonstrated that CeCu2Si2, the new type of superconductor discovered first, has isotropic superconducting gaps despite it being a strongly-correlated electron system[6]. This suggests the surprising possibility that electrons on the same site can be paired even when they are subject to a strong Coulomb repulsive force. As just described, cryogenic experiments have contributed to revealing new aspects of superconductivity, offering hot topics in the field of condensed matter physics.

Cryogenic experiments offer us valuable information in condensed matter physics research as well as superconductivity research. For cryogenic experiments, a large amount of cryogen is required, and helium, which can exist as a liquid even at −269ºC, is commonly used. Helium is a light element, so goes into space once released into the atmosphere. Therefore, helium is considered to be a scarce resource, as there is a concern of it being depleted. In recent years, Japan, which relies on exports from other countries, has often encountered a helium supply crisis, and in serious cases, researches using liquid helium have been suspended. In 2019, several groups, including the Physical Society of Japan, issued an emergency statement[7]. We will also be making efforts to develop an experimental environment in Chuo University that can address a future helium crisis while introducing a liquid helium re-condensation system and cryogen-free refrigerator.

In cryogenic environments, we encounter mysterious phenomena we rarely see in our daily life. As a typical example, this paper has introduced superconducting phenomena. Many other mysterious phenomena remain unrevealed. The superconductivity discovered in mercury about 110 years ago is a phenomenon that occurred at a cryogenic temperature of −269ºC. Today, such a phenomenon can be seen at nearly room temperature, though under extremely high pressure. The progress of superconductivity research has also deepened our understanding about the diversity of superconductivity. Practicable room-temperature superconductivity may be discovered in the near future. Although it is difficult to bring the results of such steady fundamental research back to society, it is an important first step to making a drastic change in future society. We will keep exploring novel phenomena under ultimate environments that may defy common sense.

In 2020, he was granted the Young Scientist Award in the category of science and technology by the Minister of Education, Culture, Sports, Science and Technology. He is conducting research on superconductivity and magnetism, focusing on developing unique experimental apparatus and precisely measuring physical properties under ultimate environments.