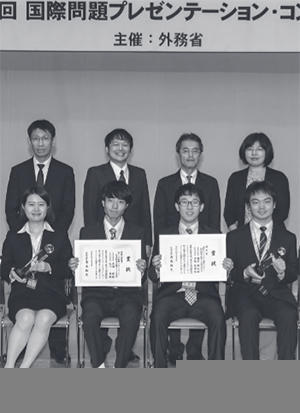 In the 35th International Issue Presentation Contest hosted by the Ministry of Foreign Affairs in October, the team of Kana Oikawa (second year, the Faculty of Law) and Ken Akahane (first year, the Faculty of Law) from the Diplomacy Research Association of Chuo University (Chairman: Faculty of Law Professor, Shuichiro Megata; Consultant: Faculty of Law Professor, Hirokazu Miyano) has been chosen as the best team and won the Minister of Foreign Affairs Award. It was the first time for Chuo University's students to win the highest award at least since 2002 including the time when the contest used to be held as International Issue Panel Discussion and Forum. 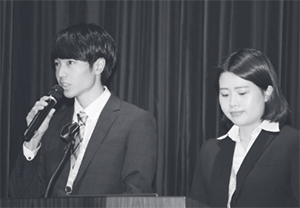 The two who won the Minister of Foreign Affairs Award commented, "We managed to ease up and deliver the presentation."

"Once I started speaking, I could relax. I'm happy with both the content and for winning the award. I would like to give my sincere gratitude to all the members of the Diplomacy Research Association including our alumni who have done their best in preparation." (Akahane)

"I naturally gave a reserved fist pump. I'm really proud of the efforts all my fellow members and I made." (Oikawa)

As soon as the two were announced winners of the Minister of Foreign Affairs Award, their faces broke into a wide smile. "We couldn't finish the last two sentences (of the planned script) within the limited time of 10 minutes, which was an accident," recalls Akahane, while Oikawa contentedly added, "After listening to the presentations of other students, I was fairly confident in our content, and Professor Megata also told us, 'You did well'."

The Foreign Ministry's contest was the topic of the Diplomacy Research Association summer camp this year and the members decided to participate. They do not always participate in external events like this every year, but this year during the summer camp, they repeatedly made mock presentations and many members helped make the presentation slides with PowerPoint to improve the presentation quality as much as possible.

During the final screening, Oikawa operated the slides and answered the judges' questions while Akahane made the speech (presentation) and their focused efforts on preparing for answering questions were especially effective.

The questions regarding feasibility were asked the most to judge whether the proposals were realistic. For example, there was a question, "Is this not considered an immigration policy? (against policies of the current government)," but they responded with confidence, "It is a mitigation measure to the conditions of the current policies. It is a model for regions with labor shortages." Compared to other universities whose students had difficulty answering questions smoothly, they think that their thorough preparations including making a list of expected Q&A were crowned with success.

Even after winning the highest award of the Minister of Foreign Affairs Award, the two reflected back on their presentation saying, "In terms of feasibility, part of our presentation still needed more thorough research," and apparently their aspiration to create better content is unquenched. After the presentation, Akahane was told by the judges, "Your proposal can be made into reality if it is taken seriously." In response to this comment, Akahane says, "It meant a great deal to me to receive such positive remarks even though I had missed sufficient attention to some aspects." 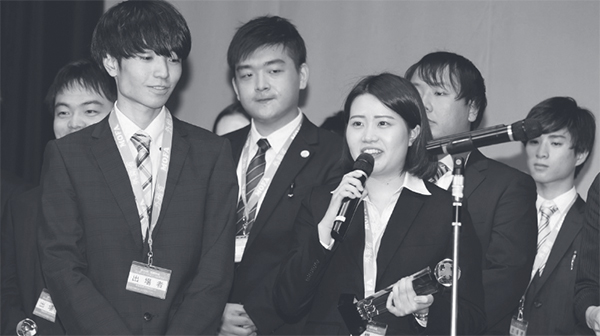 Summary :
The presentation of Oikawa and Akahane
The Second Hometown Project and the Utilization of the Comprehensive Livelihood Support Application

They proposed that municipalities such as cities and prefectures establish a mutually beneficial relationship by forming one-to-one agreements with foreign municipalities and accept foreign labor from partner countries. Also, they promoted the "second hometown project" which aims to create an environment, in which foreign labor would want to try working and living, as well as the "comprehensive livelihood support application," which will be run by partnerships between public and private sectors to develop the environment for foreigners who come to Japan for participating in the project. For Japan, they particularly target the municipalities of mountainous regions.

They elaborated on the benefits of the second hometown project; for example, when each municipality receives foreign labor from its unique partner country, the Japanese municipalities will be able to flexibly develop policies for accepting foreigners according to the circumstances associated with each partner country, encourage settlement and finding employment within the municipality, and prevent people from flowing out to urban areas. They define a second hometown as the place where one can feel safe to live and belong.

As for the comprehensive livelihood support application, they aim to contribute to alleviating the labor shortage problem by building a matching feature to connect foreign labor with local small to medium enterprises. Further, when the administrative authorities operate the application, it will be possible to share a variety of information regarding foreign workers and acceptance of those workers.

Moreover, partner countries will encourage their citizens to seek employment and live in municipalities in Japan for a certain period of time while Japan will concretely define the length of "certain period of time" at the stage of developing legislation by considering issues surrounding the long-term residency of foreigners. 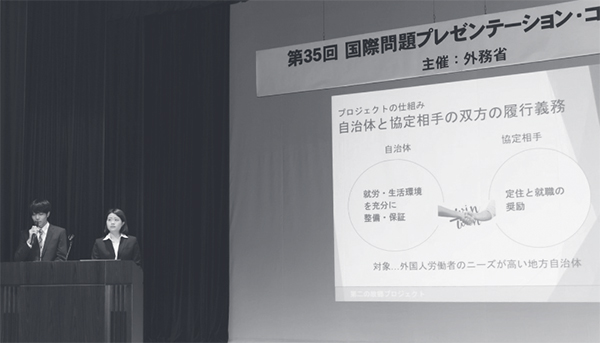 During the presentation, Akahane (on the left) gave the speech while Oikawa operated the slides and answered the judges' questions 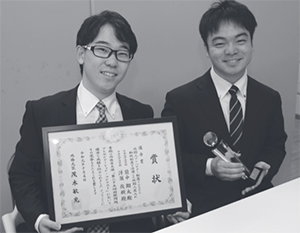 The team of Ukisu and Maenaka who won the Excellence Award gave a presentation titled, The Foreigner Ambassador System and Accepting Foreigners by Utilizing The Hometown Tax Donation System. They made preparations in an attempt to better present their content within the time limit by creating an appealing visual presentation with PowerPoint and continued working through trial and error up until 2 days before the contest. Maenaka expressed his appreciation saying, "Our senior members and alumni of the Diplomacy Research Association gave us a lot of advice." They reflected back on the day of the contest, mentioning that they were the seventh team to take the podium out of 10 teams, thanks to which they managed to ease their minds and were able to give the presentation and answer the judges' questions in a relaxed manner. However, the presentations given by other students were of a high-level, and when they heard the announcement of the winner, Ukisu was surprised because they didn't think they would win the prize.

The aim of the contest is to provide an opportunity for university students who will be entrusted with the future of Japan to deepen their understanding and interest in foreign policies, international affairs, etc. and develop their abilities in order to flourish in the international society. This year, it was held on October 5 in Nihonbashi Social Education Center, Chuo-ku, Tokyo. The judging panel consisted of 3 judges: Keizo Yamawaki, Specially Appointed Professor, the School of Global Japanese Studies, Meiji University (chief judge); Hiroki Okazaki, Director of Shibazono Danchi Neighborhood Association, Kawaguchi City, Saitama Prefecture; and Midori Okabe, Professor, the Faculty of Law, Sophia University. They evaluated creativity, specifics, feasibility, etc. The theme was "My proposals: Toward acceptance of foreign citizens and realization of a harmonious society," and it received applications from 21 teams (29 people) nationwide, out of which 10 teams (17 people) passed the preliminary screening and were selected for final screening. A team consisted of Kaoru Arai (first year, the Faculty of Law) from Chuo University along with another 2 students from Keio University was also chosen as a finalist.

This foreign service entrance exam organization is located at the Tama student research building Honoo-no-Tou. It was established in 1951 by the students aspiring to become diplomats. Until now it has turned out 50 people or more who passed the foreign service examination. Currently, it has 24 members who are in their first to the fourth year in the Faculty of Law. All students from all undergraduate schools are welcomed to join on the condition of passing the selection test. It builds the foundations for passing the civil service examination, studying and analyzing international relations based on the 3 subjects of international laws, international politics, and current affairs. Alumni visits provide an opportunity to hear about the activities and achievements of the alumni who work in the Ministry of Foreign Affairs, international organizations, etc.