Beautiful translation coming out of extraordinary amount of reading 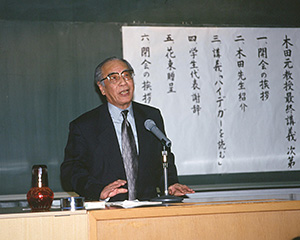 Nakamura The reason why Dr. Kida has a special presence to me is because he had a remarkable sense of literature. "Osamu Dazai's mid-period works are good," he often said. Not "No Longer Human" or "Bannen." Only someone who read not only Dazai's writings but also other literature can say this. He also unsparingly shared the essence of the literature with us. I have learned a lot from this.

Muraoka He really loved reading. His wife told me that when she showed him his list of books, he told her the names of the books that he wanted to read, even if he had difficulty getting up from his bed. This happened only two to three weeks before he passed away.

Suda He had a strong passion for books. In addition to philosophy books, he was reading a wide range of books. I believe he was particularly enjoying reading literary works. At his funeral, I saw his book titled "Odyssey of Poetry" (Heibon-sha Shinsho) in his coffin. It was not a book about phenomenology or Heidegger, but his book about literature. I once again felt his passion for literary works.

Kaganoi His writings were great, too. It was his great achievement to have translated esoteric texts that are incomprehensive to ordinary people into understandable words in Japanese. What's more, his translation was in beautiful and simple language that anyone can easily read and understand. I, myself, learned a lot from it. 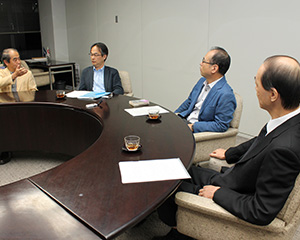 Muraoka That is true. We should talk about the aspect of Dr. Kida as a translator, too. I believe the book translated by Dr. Kida which I read was "The Adventures of the Dialectic." I was deeply impressed by his work of translating a very complicated book into such beautiful Japanese. At that time, many translated books were complicated as if saying, "because philosophy is esoteric, it is only natural that you cannot understand this book." Meanwhile, Dr. Kida's translation was so easy to follow. I believe that, thanks to him, the level of Japanese translation and the approach to translation have changed significantly.

Kaganoi Yes, translation shows Japanese ability. In this sense, Dr. Kida had a great ability. He translated many philosophy books from German and French. How many languages could he handle?

Nakamura I think he was proficient in English, German, French, Greek and Latin. Oh, and Japanese (laugh).

Muraoka But he was not good in conversation. Looking at his beautiful translation of German to Japanese, you may think that he could speak German fluently. However, it was not the case. I once had a meeting with him and a scholar from an English speaking country. Dr. Kida just was standing silently with an unfriendly expression. He did not want to be spoken in English. So we were just standing there without a word (laugh). 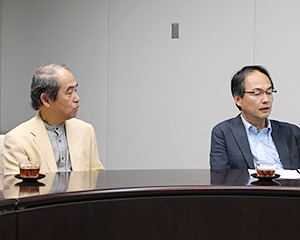 Nakamura He did not step into something that he did not feel confident. That's how he was. But he certainly had an amazing capacity as a translator, much more as a philosopher. At the graduate school, when I submitted my translation works to him, he used to thoroughly correct them. I cannot imagine how much that had helped me brush up my Japanese ability. I deeply appreciate him for that even now.

Suda When I met Dr. Kida for the first time, I was slightly taken aback by his appearance. Based on his wonderful writing, I was imagining that he would be a fair-skinned, slender person like a literary youth. However, in fact, he was a dark-skinned and sturdy-built person. His way of speaking was also not so good. Well, kind of simple and artless.

Muraoka Among the students, his nickname was "Black tamer of wild animals", in contrast to the famous philosopher, Dr. Keiichi Mishima's nickname, "White wizard" (laugh).

Humorous personality adored by many people 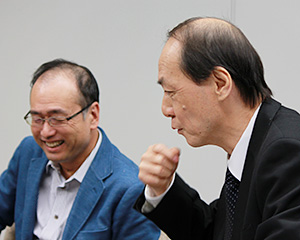 Kaganoi All of you had been continuing your research closely with Dr. Kida, and in a way, you inherited his DNA. We are now laughing and talking despite many difficulties that encompass our research. I am sure that this is a blessing of Dr. Kida's personality.

Suda He was cautious yet bold, sensitive yet daring. He was a very mysterious person. His attitude was tough and strict to learning but kind to people. And because he had an unusual amount of work and activities, being around him all the time was sometimes too much (laugh). Nonetheless, he was adored by many people.

Nakamura I agree. The person who continued his research up close to him must be Dr. Muraoka. I was feeling sympathy for you. (laugh) You have been working with him for almost 40 years. And you share the same birthday and zodiac sign with Dr. Kida.

Muraoka You are right. He was a very straightforward person, and we always had an open-hearted communication. Being superficial was not acceptable. Moreover, he was a very attractive person. He was full of humor and his stories were very interesting. He had a unique way of thinking, and he easily exceeded the boundaries of conventional thinking (laugh). One month before he passed away, he told me to sit in front of him. So I was mentally prepared for listening to his last words to me. "Wow! You are getting thin on top," he said. These became the last words from him to me. I am in trouble now, because everyone may think that such a great philosopher must have left profound words (laugh). 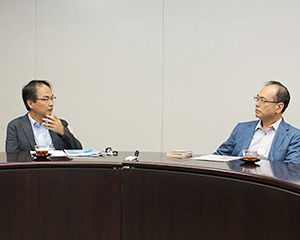 Nakamura That was a great story, describing typical Dr. Kida (laugh). I visited his house about six months before he passed away. He had already lost a lot of weight. But he told me about the book he read on the previous day in detail. "I cannot die because there are still so many interesting books out there," he said. I was impressed with his strong passion.

Kaganoi He had a sense of humor, and he was interested in people. I once took him to various sightseeing places in my hometown, Kochi. He did not show any interest in famous places and historic sites, and he looked disengaged all the time. However, he was observing people in bars or in the town. This made me realize that he had a strong interest in people.

Muraoka Talking about famous places and historic sites, he once invited me to take a trip with him. It was the "Sano Yakuyoke Daishi" (Tendai sect temple in Tochigi). I asked him why, and he told me that he wanted to drive off bad luck because he broke his little toe when he was rushing into a train. Both of us received a prayer to drive the bad luck away at the temple, and he jokingly said, "As Western philosophy scholars, we should be shameful for making wishes to god."

Kaganoi He left a lot of funny stories to us. And, of course, he also left wonderful inheritance as a philosopher and as a teacher. My Merleau-Ponty research originally began with the book translated by Dr. Kida. I would say all of us here owe who we are today to Dr. Kida. 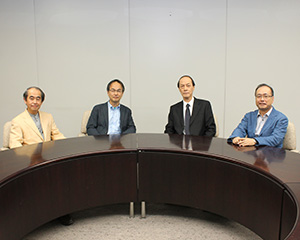 Nakamura I agree. If I had not encountered Dr. Kida in my school days, I would not be who I am now. He gave me sincere advice both in research and private aspects. I owe a lot to him.

Muraoka No matter how successful he became, he was devoted to amateurism in a good sense and discussed freely with others on an equal footing. He did not persist on the trend that had been prevailed so far in the philosophy world, and stuck to his interpretation that he thought as being right. I learned a lot from such attitude of him.

Suda I was very fortunate to have been able to be close to him and learn how to read and interpret books at his reading group. All I can say is that I am impressed with his attitude of tenacious and tireless research philosophy. I would like to steadily inherit his attitude and spirit.

Akira Suda
Akira Suda was born in 1947. Coursework completed without degree from the doctoral course of Philosophy Program, Graduate School of Arts and Letters, Tohoku University. After working as an associate professor at Faculty of Arts and Letters, Tohoku University, assistant professor at Faculty of Humanities, Hirosaki University, etc., Professor Suda assumed the current position in 1989. He is specialized in philosophy and ethics. His research theme includes Kant philosophy and Heidegger philosophy. His book includes "Sophie's World" (Editorial supervisor for Japanese edition/ NHK Publishing).

Shuichi Kaganoi
Shuichi Kaganoi was born in 1950. He withdrew from the doctoral course of French Literature, Graduate School of Letters, Chuo University. After working as a part-time lecturer at the School of Human Sciences, Waseda University, full-time lecturer at Graduate School of Science and Engineering, and more, he assumed the current position in 1998. His research theme includes Merleau-Ponty, modern philosophy, and linguistics. His books include "Merleau-Ponty: Inspiring Philosophy" (Hakusuisha) and "Textbook of Intellect, Saussure" (Kodansha).

Shinichi Muraoka
Shinichi Muraoka was born in 1952. Coursework completed without degree from the doctoral course of Philosophy Program, Graduate School of Letters, Chuo University. After working as a part-time adjunct professor at the Faculty of Letter, Chuo University, assistant professor at Akita Keijo Junior College, and more, Professor Muraoka assumed the current position in 2004. His research theme includes German idealism and German/Jewish philosophy. His books include "Philosophy of Dialogue: Hidden Genealogy of German/Jewish Philosophy" and "German Idealism" (both Kodansha).

Noboru Nakamura
Noboru Nakamura was born in 1958. Coursework completed without degree from the doctoral course of Philosophy Program, Graduate School of Letters, Chuo University. After working as a full-time lecturer at Faculty of Letters, Chuo University, and more, Professor Nakamura assumed the current position in 2005. His research theme includes modern Western philosophy, and issues concerning language and time. His books include "Introduction to Wittgenstein's 'Philosophical Investigations'" (Kyoiku Hyoron Sha) and "Bergson: Philosophy of Time and Space" (Kodansha).