Modern times as seen in novels and TV dramas

In addition to being a source of entertainment, novels and TV dramas are essential elements when considering Japan's manners and culture. We held a discussion between an author who has had many of his works made into TV dramas and a literary scholar who researches novels and TV dramas. Both of these professionals are directly involved in Japan's literary culture and visual culture. They discussed the appeal and impact of novels and TV dramas, as well as insight on contemporary society gathered from these two cultures.

Usami I have researched Japanese literature from the Meiji Period and modern novels by authors such as Haruki Murakami. Recently, I have expanded my research beyond literature to include TV dramas. As a researcher, the opportunity to speak with the writers of novels and dramas is very precious to me, and I am happy to meet with you today. 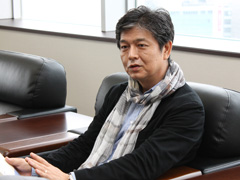 Doba Thank you very much. Nowadays, the link between novels and TV dramas has increased. Personally, I write sports novels and police novels. The past 10 years or so have seen a boom in police novels and detective dramas. Many of my works have been turned into TV dramas. In any case, TV dramas already have a history of more than 50 years. In that respect, you would think that there would be more researchers focusing on TV dramas.

Usami You're right. Within fiction research, TV drama is the most lagging field. I felt that someone had to address this field. There is a misconception that TV dramas possess a routine form which makes them understandable to as many people as possible and there is no need to analyze such dramas. However, although the majority of TV dramas do follow a routine form, about 30% break away from this pattern. I seek to deeply examine and clarify the meaning of unique dramas.

Doba TV dramas are an important material for understanding the trends and characteristics of a certain period in time. TV dramas have a strong impact. Recently, it seems that novels are written in a drama-like style. An increasing number of people demand TV dramas which they can empathize with. This demand may also have impacted novels. Personally, I think that it is natural not to be able to identify with novels and dramas created by another person. Still, nowadays many people complain that they find such entertainment boring because they can't identify with it. I am quite concerned over this trend. 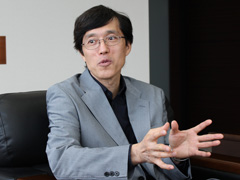 Usami That's a good point. In the past, most people enjoyed novels because they could experience the writing of a prominent author or dream of unbelievable worlds. Conversely, people nowadays have changed to searching for points which they can empathize with. I feel that more novelists and TV drama writers are focusing on creating empathy with their reader or viewer. Mr. Doba, how do you usually feel when your novels are dramatized?

Doba Fundamentally, authors are headstrong creatures who only believe what they want to! So, I'm happy when the drama closely follows the original work. Still, I consider the original novel and the drama to be separate forms of entertainment and I enjoy watching the finished drama as a normal viewer. Even when I am shown a script that is quite different from the original novel, I sometimes feel empathy as a fellow creator if the scriptwriter passionately promotes their work. Nevertheless, recently I feel that there is an increase in TV dramas that are based on novels or manga. I wonder why?

Usami Unlike novels and movies, the initial step in making a TV drama successful is to get viewers to watch the first episode. Therefore, producers aim to entice fans of the original work. Furthermore, ideas for new dramas may have been exhausted. On the other hand, even as there is increased demand for works which can be identified with, you have a very stalwart way of writing. Many of your characters are quite individualistic.

Doba I dislike creating characters with whom everyone can identify with. This may be because I was originally a fan of overseas novels and have read stories from countries with different cultures and ways of thinking. Currently, I am reading an entertainment novel from Africa. It's very difficult to understand because the politics and cultural climate are completely different from those of Japan. However, I think that it's a waste to discard a novel simply because it cannot be understood from the sensibility of a Japanese person. For me, the appeal of novels is the opportunity to encounter new worlds which are difficult to empathize with.

Reality of stories with losers and unhappy endings 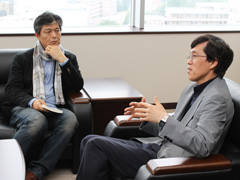 Usami Another thing which I feel from your police novels is reality. Your novels don't contain the foreshadowing which is often found in mysteries, nor do they contain sudden twists in the story. As a result, what I am reading starts to seem like an actual event. Despite a high-level of storytelling, your method is quite natural and creates the impression of reality without the feeling of cunning.

Doba Actually, that's what I aim for when I write. I don't write about things which don't occur in the real world. In other words, I only write about reality. Locked-room murder cases and surprise endings almost never occur in reality. In the future, I plan to continue to write stories which could actually occur and feature characters that can't be identified with!

Usami Your novels are real fiction. However, I feel that storytelling can also be found in non-fiction works. One example of such non-fiction is how the Japan women's national soccer team Nadeshiko Japan won the 2011 World Cup. Even so, people sought to find a story in victory which was the result of effort and sacrifice by the athletes. People are enthralled by such storytelling. Fiction is a genre which condenses and boldly offers such storytelling. Mr. Doba, I'm sure that you are well-versed in non-fiction works due to your background as a newspaper reporter. Why did you choose to write fiction novels?

Doba Honestly, I had to choose to write fiction novels as I could not write non-fiction novels out of a sense of fear. Facts differ from the perspective of each person. There were cases in which I wrote what I thought was the fact only to have my writing completed refuted. I really felt this scary aspect of non-fiction writing when I was a newspaper reporter. In contrast, fiction is written completely from your own imagination and you can take full responsibility for any criticism. Regarding storytelling, I am recently trying to remove it from my writing.

Usami Does that mean that you are trying to break free from the mold of fiction novels?

Doba Yes. There are a limited number of patterns which can thrill the reader. I want to avoid being restricted to such patterns. In the case of sports novels, the classic touching pattern is to achieve victory through effort and persistence. However, I like stories in which the character loses or always finishes 2nd place despite his or her best effort. In reality, only a lucky few attain the position of No. 1. The majority of people lose. I guess that's why stories of finishing in 1st place are so popular, but I feel uncomfortable with such stories. Actually, sometime this autumn, I plan to release a new novel about a character that flees from the pressure of competing in the Olympics.

Usami I'm looking forward to reading that. It's much different than the form of other novels. In reality, it is infinitely more common to fall short of No. 1 and to miss the opportunity for glory. When watching Olympic athletes, I often marvel at how they are able to withstand the pressure of high expectations. In that respect, your new novel also deals with reality.

Doba Even in your specialized field of TV dramas, there used to be many dramas which portrayed defeat and sadness. Even Star of the Giants, a quintessential animation on tenacity in sports, portrayed a series of defeats in the end. Despite being such a bitter story, for some reason people only remember the parts in which Hyuma persevered and achieved success. Other examples are the detective dramas Taiyo ni Hoero and Tokuso Saizensen which I often watched when I was a child. I remember many of these shows having unhappy endings.

Usami You're right. The Star of the Giants animation series which were broadcast in the 1960s and 1970s dealt with the continuous quest for glory while suffering repeated defeats. Yet, it was a sad story in which glory was never achieved at the end. In that era, there were many other TV dramas which had unhappy endings. Such dramas were popular among viewers.