Regional areas of Japan are not vulnerable

According to the Annual Report on Prefectural Accounts, the gap between Tokyo, which had the highest per capita income in 2018, and Okinawa Prefecture, which had the lowest per capita income, was 2.26 times. Whether this difference is large or small is important when considering whether regional areas are vulnerable. When comparing only data from Japan, it is easy to reach the conclusion that a double income disparity is large. But what if we look at the rest of the world? The following graph uses OECD data to compare the coefficient of variation[1], which is a statistical index showing regional disparities. Japan is the third country from the bottom among the 31 countries for which statistics are available, and Japan has a small regional disparity. Therefore, it is clear that the regional disparities in Japan are not so large when compared to the rest of the world. 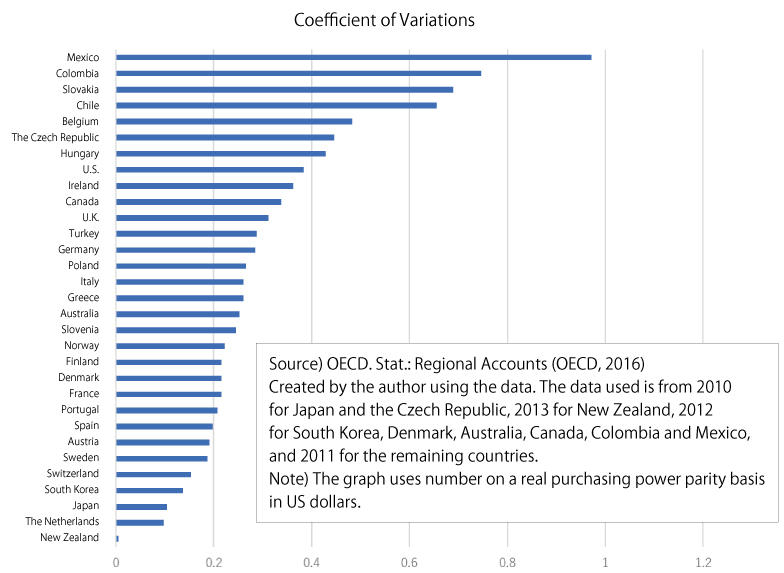 Looking at the gross domestic product of prefectures, that of the Kyushu block was $464.3 billion in FY2017. This level is comparable to $503.8 billion of Belgium and $418.3 billion of Austria. Moreover, the population of Kyushu is 14.45 million, which is comparable to Belgium's 11 million and the Netherlands' 16.11 million. In other words, it can be said that regional areas in Japan have a population scale and economic scale comparable to those of mid-sized European countries. Should Japan's regional areas, which are comparable in size to mid-sized European countries, be regarded as vulnerable?

I believe that regional areas in Japan are by no means vulnerable, and that there is no need to assist in reducing disparities. Rather, it is my opinion that subsidies will ruin regional areas. To explain my idea, I will begin by introducing the concept of regional economics that is a prerequisite for understanding this mechanism.

The eating, drinking, and other consumption activities that occur during sightseeing and events are commonly referred to as "spending money." It was assumed that the money spent by large numbers of tourists coming from overseas would bring affluence to a region. The mechanism is as follows. The money spent by tourists becomes the income of another party. If tourists eat at a restaurant, money spent will be the sales (income) of that restaurant. If they buy souvenirs at a department store, the money spent will be the sales (income) of that store. An increase in sales will cause an increase in the cost of purchasing raw materials and an increase in employee income. This increase in income results in increased consumption, which in turn leads to higher sales and income for others. Ultimately, the local economy is revitalized as this process is repeated. This is often referred to as the economic effect (flow effect). Recently, the phrase "local production for local consumption" is often used in Japan. The expectation is that local consumption of local products will create greater circulation of money within the region. However, circulation in a regional economy will reach essentially zero after a few cycles at most, so it is necessary to continuously have money spent in the region.

Here, the important point is to create capital accumulation by reinvesting the increased income resulting from the spending of money. Since the accumulated capital continuously generates income (stock effect), it is important for a regional economy to form this capital. The stock effect means that assets generate income so that landowners can live on building rent and land rent. Capital accumulation can be called asset formation. Here, the term "assets" includes tangible assets such as real estate, securities, and savings, as well as intellectual property such as designs and patents, and intangible assets such as brands, skills, and knowledge. Agricultural products such as Japanese strawberries and beef have been branded and are traded at high prices overseas. The cityscape and culture of Japan have become tourism resources that create regional charm. These are the intangible asset of a region. It should be clear that it is important for the local economy to create a structure in which sustainable income is produced by capital accumulation that increases the value of the region.

Materials) Created by the author

Subsidy traps which interfere with the recurring-revenue effect

Subsidies from the public sector are one source of funds for accumulating capital that produces a recurring-revenue effect. Although the subsidies spent for regional areas seem to be supportive, a huge trap awaits. Subsidies reduce actual out-of-pocket costs, and therefore have the same effect as lowering prices. Furthermore, since the subsidy is a public fund, it must be used for the specified purpose by the specified date. Consequently, subsidy users are forced to make excessive investments in a short period of time, and business plans are not well formulated. This results in buildings, events, etc., which are all very similar. Such common assets do not become intangible assets such as a design or brand that will increase the future value of the region.

Subsidies also cause changes in behavior. For example, let's assume the case of a business with a subsidy rate of 80%. Such subsidies enable the business to be implemented at a cost of 20% of the original cost. Now, what if a condition that this subsidy project must be finished within a fiscal year exists? This creates a situation similar to an 80% bargain sale with a specified deadline. Unfortunately, the human psychology is such that we will jump at the opportunity when a deadline and exceptional discount have been set.

Growing the market through cooperation from citizens

Then what should be done? The conclusion is that there is no such thing as "this way you will succeed," but there are ways to increase your chances of success. What is needed is you yourself make investment and create assets from which you can earn profit. If it's difficult to do it alone, you can do it with your friends. We believe that creating a platform for making such friends is an important role for the region.

In particular, local industries and local governments often have regional markets. If the income of the region does not increase, the income of industry and government will not increase, either. In this respect, it is necessary to have ideas for growing the regional market. The fact that professional sports teams actively engage in events and investments that are supported by the local community is deeply related to the fact that the majority of a team's income is determined by the number of spectators. Accordingly, teams actively plan to increase income by increasing the number of supporting fans, and then to use the revenue to plan events that lead to even greater support. For example, teams are involved in many projects for children in the hope that those children will support the team for a long time and will grow into future revenue sources. By investing in this way, teams grow their market and connect it to future income.

Regardless of the form, the first step in regional development is to share regional issues and create a platform where each party can engage in individual behavior.

[1] The ratio of the maximum value to the minimum value is intuitive and easy to understand as an index showing the regional disparity. However, this index uses only two of the 47 prefectures, and the information of the 45 prefectures between the two extremes is ignored. For this reason, the coefficient of variation (=standard deviation/mean value), which indicates the degree of variation with respect to the overall average, is often used to grasp the regional disparity.
[2] Kazuyasu Kawasaki (2008), Economic Disparity between Regions, edited by Toshiyuki Uemura and Hiroki Tanaka, in Examining Society with Widening Disparity (Nikkei Business Publications), Chapter 7.
[3] The nonresident population includes the number of people who visited a region for sightseeing, etc., and the connected population is the number of people who have not visited the region but are related to the region in some sort of various ways.
[4] Kazuyasu Kawasaki (2021), Nudging for Reducing Disaster Losses, the Japanese Journal of Real Estate Sciences; 137, 40 to 45.
[5] For example, the number of children/students in elementary and junior high schools, the number of households, and the population aged 65 and over.

He has served as a researcher at institutions including the Japan Research Institute for Social Development, the Comprehensive Development Plan Section of Kawasaki City Hall, and the Japan Center for Economic Research. He held a position as an Instructor in the School of Political Science and Economics, Tokai University in 2001, and was then promoted to Assistant Professor in 2004 (his title was changed to Associate Professor in 2007). He also served as Professor in the Faculty of Economics, Toyo University in 2013 and assumed his current position in 2019.

He has engaged in works related to the forefront regional policies such as policy research at institutions including the Cabinet Office, the Research Institute of Economy, Trade and Industry, the Board of Audit of Japan, and the National Diet Library, and as a council member and a policy advisor in local governments.
His written works include Economics of the COVID-19 Shock (Chuokeizai-Sha, 2021; co-authored), Studies in Failure of Regional Revitalization (Kobunsha-shinsho, 2016; co-authored), Regional Revitalization through Public-Private Partnerships (Keisoshobo, 2013; sole author) and more.