Where and for how long are entry restrictions on foreigners implemented?

Some people say that Japanese passports are the strongest in the world. This is because the British consulting firm Henry & Partners surveyed the number of countries and regions (hereinafter, "countries, etc.") that can be accessed without obtaining a visa by different passports, and announced that Japan had the highest number for the fourth consecutive year. As of October 15, 2021, the number was reported to be 192 out of 227 travel destinations, but this does not take into account temporary entry restrictions to combat the COVID-19 pandemic. In fact, as of October 15, 2021, 69 countries, etc., have restricted entry of Japanese nationals or who are coming from Japan, and 185 countries, etc., have imposed conditions and behavioral restrictions on entry.[1] On the other hand, the number of countries, etc. for which Japan does not require visas for entry is 68[2] as of June 2021. However, even in such cases, visa exemption measures have also been suspended, and a situation continues in which foreigners are not allowed to land in Japan unless there are special circumstances.

On a global scale, as of October 11, 2021, the International Organization for Migration reports that 229 countries, etc. around the world have implemented a total of 109,352 travel measures. Among these measures, 27,056 are entry restrictions and 82,296 are conditional entry permits.[3] From March to April 2020, entry restrictions exceeded 80% of the total; however, in August of the same year, the number of conditional entry permits exceeded the number of entry restrictions. Also, from October to the present time, entry restrictions have accounted for less than 30% of the total measures. Even so, this ratio varies widely depending on the region. For example, in the European Economic Area (EEA)--which consists of the European Union (EU) and Ireland, Liechtenstein and Norway--entry restrictions have never fallen below 50%. In the Central and West Africa and East and Horn of Africa, the ratio of entry restrictions has decreased to just a few percentage points since around November 2020. Although these differences may be influenced by multiple factors, it is often asserted that countries in the Global North which had already tightened immigration control prior to the pandemic are now using COVID-19 to justify restrictions on the acceptance of foreigners.

Change in the ratio of entry restrictions (red) and conditional entry permits (yellow) worldwide and by region; Source: Note[3] 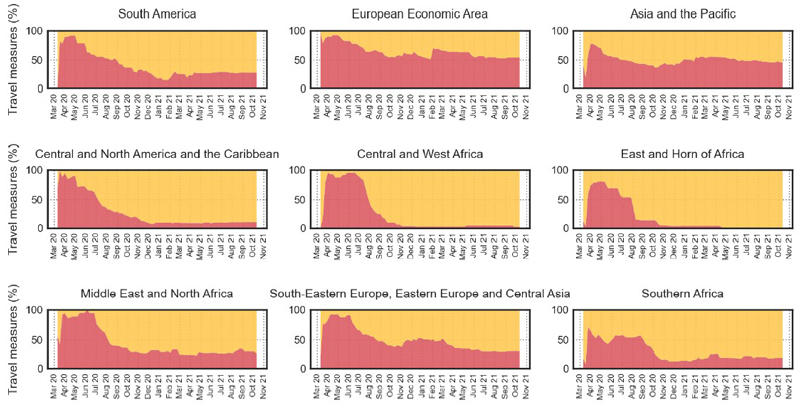 Persons to whom entry restrictions are relaxed most

For the last 18 months we have seen the power of states to refuse the entry of foreigners. On the other hand, countries accepting laborers from other countries were reminded that closing the door to the entirety of such a workforce is an untenable option.

For example, since February 2020, the United States has issued entry bans by gradually expanding the target countries beginning with China and then Iran. On March 20, the United States stopped operations to issue visas at embassies and consulates around the world.[4] However, six days later, it decided to continue visa operations for urgent and critical missions. It was announced that since the H-2 program is essential to the economy and food security of the United States and is a national security priority, applications for it could be adjudicated without an in-person interview.[5] The H-2 program is aimed at short-term workers who do not require special skills. There are separate H-2 visas for seasonal agricultural workers (H-2A) and non-agricultural workers (H-2B). The total number of non-immigrant visas issued in 2019 was about 8.74 million, but in 2020 it decreased by more than half to about 4.01 million. However, when focusing on H-2 visas, the number decreased was by approximately 25% from about 620,000 to about 470,000.[6]

Entry and exit control is slightly complicated for EU states. The Schengen Area, which consists of 22 of the 27 EU countries and four members of the European Free Trade Association (EFTA), has abolished a border check at its internal borders. This requires strict external border control. In order to be permitted to cross an external border, the person in questions must be verified as not posing a threat to public policy, internal security, public health or the international relations of any of the Member States. Whether or not to allow entry to individual foreigners is a matter decided by each Member State. However, from March 16, 2020, the EU Commission has used soft laws to make recommendations to all EU Member States and EFTA states (the combination of both is referred to as the EU+) in order to coordinate their decisions to prevent the spread of COVID-19 effectively. On March 16, 2020, a document which later became known as the EU Travel Ban[7] was issued. The document called for a temporary restriction on non-essential travel from a third county to the EU+ for a 30-day period. Even so, in addition to citizens of EU+ states and their family members, the EU Travel Ban defined seven special cases for healthcare professionals, frontier workers, transport personnel, diplomats, etc., as other travelers who fulfill an essential function or a need to whom entry restrictions do not apply. Furthermore, seasonal workers in the agricultural sector were added by the guidance[8] that was issued on March 20 in response to the EU Travel Ban.

In contrast, for internal borders where a border check have been abolished, temporary reintroduction of border control is permitted if there is a serious threat to public policy or internal security. Although public health is not explicitly stated, as a form of post-facto approval of measures taken by Member States, the EU Commission allowed them to reintroduce temporary border controls as a reaction to the risk posed by a contagious disease in an extremely critical situation in the guidelines[9] on March 16 . However, the guidelines[10] issued on March 20 concerning exercise of the free movement of workers listed 17 critical occupations including healthcare professionals, nursing care workers, food manufacturing and processing workers, transportation professionals, and civil servants, etc. The guidelines state that the host Member States must allow workers in these occupational categories to enter the territory and ensure unhindered access to their place of work. Moreover, the guidelines referred to the importance of seasonal workers in the agricultural sector.

In Japan, the issuance of new visas began to be suspended for 11 countries from March 26, 2020. Afterwards, the regions targeted for suspension were subsequently expanded. However, as discussed above, there are exceptions to the refusal of landing by foreigners if special circumstances exist. As one of such exceptional measures, Business Track began in June 2020 as a measure that enables business activities even during the quarantine period after entering Japan by establishing a framework for entry and exit of human resources necessary for business.[11] Although the Business Track measure was suspended on January 13, 2021, there were not many business visits during the period when it had been applicable. It was reported that 70% of people entering Japan via Business Track were international students and technical intern trainees.[12]

Globalization is a term that describes the relaxation of regulations of states on the movement of goods, services, capital, persons, etc., across national borders and the accompanying increase in the amount of movement. Among the persons referenced in this definition, only those with certain qualifications and skills have enjoyed the benefits of free movement across national borders. Free movement was not available for unskilled, low-wage laborers. On the contrary, it can be said that the inability for unskilled workers to move freely was an indispensable condition for globalization, because having low-wage labor fixed in a certain region creates the benefit of moving capital to that region. Current International Law provides states with almost absolute discretion in permitting or refusing the entry of foreigners. For the past several dozen years, this International Law has made it possible for the Global North experiencing labor shortages to compensate by accepting the necessary laborers from the Global South when needed. In that respect, International Law has worked favorably for the Global North. However, the pandemic manifested which foreigners are positioned the farthest from an entry restriction of each state, and many laborers in unskilled fields were included in that category.

In recent years, there has been a debate which could lead to the possibility of overcoming the absoluteness of state sovereignty in this area. The European migrant crisis of 2015 once again caused the international community to confront issues such as the responsibility for accepting refugees, etc., and the sharing of that burden. The 2016 UN Summit on Refugees and Migrants led to the adoption of two new agreements in 2018; specifically, the Global Compacts on Refugees and Migration. It also led to the start of periodically holding the Global Refugee Forum as an opportunity to show efforts that each state makes on refugee issues in front of other states from around the world. The American Society of International Law held the Symposium on Framing Global Migration Law in 2017. The name of the symposium includes the intention of considering a radical redesign of the traditional International Migration Law. Among those challenges is the starting discussions from a migrants-centered point of view and not from a state sovereignty-based one. To that end, an interdisciplinary perspective and a Global South perspective are also important.[13]

Having the strongest passport in the world means that Japan is in the position of having received preferential treatment under current International Law. It is difficult to see the unfairness of existing rules from that position and we should keep that in mind. In Japan, since the Supreme Court ruling in the McLean Case in 1978, emphasis has been placed on the aspect that the state is not obliged to accept foreigners under customary International Law. However, International Law in various fields, including the field of human rights, is developing. It will also be necessary to seek advancement in International Law on the movement of persons toward a more equitable and sustainable direction.

*Access to all of the following links was confirmed on October 15, 2021.

Emiko Nakasaka graduated from the School of Law, Nagoya University in March 1989. She completed her graduate studies at The University of Sheffield (major in International Studies) in September 1991 and acquired an MA in International Studies. She completed the Master’s Program and acquired LLM in the Graduate School of Law, Nagoya University in March 1992. She finished the Doctoral Program of the same graduate school in January 1996. She served as Lecturer and then as Assistant Professor in the Faculty of Integrated Arts and Sciences, Hiroshima University, and as Professor in the Graduate School of Social Sciences, Hiroshima University before assuming her current position as Professor, Faculty of Letters, Chuo University in 2017.

Her main research themes are economic integration and movement of persons and refugee issues, with a focus on the movement of persons in the EU. Her major written works include Refugee and Solidarity: EU Dublin System and Regional Protection Programme, (Toshindo Publishing, 2010), Introduction to Human Rights: Constitution, Human Rights, and Minorities (4th Edition), (Horitsu Bunka Sha Publishing, 2021; co-authored with Makoto Yokofujita), Migration and Ethnicity: Towards a Society That Coexists with Other People Crossing the Border, (Akashi Shoten Publishing, 2021; co-authored and edited with Kenichi Ikeda; interdisciplinary book based on the Project Subject course in the Faculty of Letters in the 2020 academic year), and more.