What is Management that Achieves Sustainability?--Collaboration between Japan and Thailand--

Toward a new 30 years

Until now, the management paradigm has been revolutionized approximately every 30 years. 1900 to 1930 was an era of pursuing streamlined operations within a corporation. 1930 to 1960 focused on human relations theory, with progress made in research on motivation and leadership of people working in an organization. 1960 to 1990 was a period of strategic management to win competition among corporations. 1990-2020 can be defined as an era of globalization against the backdrop of progress in IT. Now, what kind of management era will we experience for the 30-year period from 2020 to 2050? As many novels and movies have predicted, the theme will most likely be the coexistence of AI/robotics and humans, or our forced response to a crisis of human existence such as natural disasters and food shortages due to climate change. In any case, there is no doubt that sustainability will be one of the keywords in order to reach the year 2050 and beyond.

What is SDGs management?

At the 2015 United Nations Summit, the Sustainable Development Goals (SDGs) to be reached by 2030 were set. The SDGs immediately became a trend in the business world. Currently, SDGs management is in full force. We can often see business people wearing colorful round badges showing the 17 development goals. The SDGs management originally referred to management aimed at achieving the SDGs or that incorporates the principles of the SDGs. However, upon the release of the Guide for SDG Business Management[1] by the Ministry of Economy, Trade and Industry in 2019, SDGs management was introduced as follows: From the viewpoint of sustainably improving corporate value, it is considered an important challenge for companies to take appropriate approaches toward integrating SDGs into their management and attracting ESG investments. Furthermore, many banks and think tanks are publishing analysis on the management merits of incorporating the SDGs at corporations. The SDGs, which were originally positioned as goals creating a sustainable world, seem to be transitioning to the position of tools for sustainable improvement of corporate value.

The Business of business is business.[2]--As illustrated by this often-cited quote from the economist Milton Friedman, there is persistent support for the concept that the meaning of a company's existence is found in the dedication of managers toward maximizing profits. Occasionally, this concept may be incompatible with the attitude of pursuing sustainability by shifting down.

The concept of a sufficiency economy as advocated by the former King Bhumibol (King Rama IX) has taken root in Thailand. According to the moderate teachings of Buddhism, the idea of a sufficiency economy is to create a supple and sustainable society by suppressing greed and doing only what is needed with temperance and honesty. This philosophy was incorporated into the Thai National Economic and Social Development Plans after the 1997 Asian Financial Crisis and continues to this day. Survey results show that management based on the philosophy of a sufficiency economy is supported by 85% of Thai managers.[3] However, does the concept of sufficiency not hinder the development of corporations? A survey[4] revealed that Thai managers interpret the meaning of development of a corporation as going beyond profit and corporate growth to include even more diverse aspects. According to a questionnaire, businesses based on a sufficiency economy is considered to have the following characteristics: (1) not seeking short-term profits, (2) refraining from investing in unrelated fields, (3) being trusted, (4) emphasizing the creation of employment opportunities, (5) creating employee happiness, and (6) creating employee peace (stability). Furthermore, interviews revealed that Thai managers view development as follows: (1) enabling managers and employees to grow into sensible people through their work, (2) sharing the gains (wealth), and (3) contributing to the growth of the country. In this way, Thailand practices corporate management that recognizes sufficiency while aiming for sustainable and diverse development.

Japan and Thailand learning from each other

Until now, research on the transfer of knowledge between Japanese corporations and Thai corporations has been implemented on a product/technology basis; for example, technology transfer and reverse engineering. However, moving forward, the transfer of knowledge on a management basis will become even more important. For example, Japan can learn a great deal from Thailand about diversity management. At a major Japanese manufacturer in Thailand, women account for more than 60% of managers in positions of group leader and higher. When the Thai subsidiary heard that the corporate head office in Japan had established a Headquarters for Promoting the Advancement of Women, management at the subsidiary joked that "I guess we need to create an organization for promoting the advancement of men?!" Moreover, Thailand has experience in accepting HIV-positive people into the workplace. This is in stark contrast to the current situation in Japan, where there is uncertainty regarding the employment and cultivation of people with disabilities, people with intractable diseases, and cancer survivors. Similarly, when it comes to accepting foreign workers, Thailand has a long history of accepting workers from neighboring countries.

On the other hand, what can Thailand learn from Japan? In my opinion, we can offer wisdom on human resources education which has been continually refined based on the concept of "human resource development is essential to manufacturing," and equality of human value based on that education. 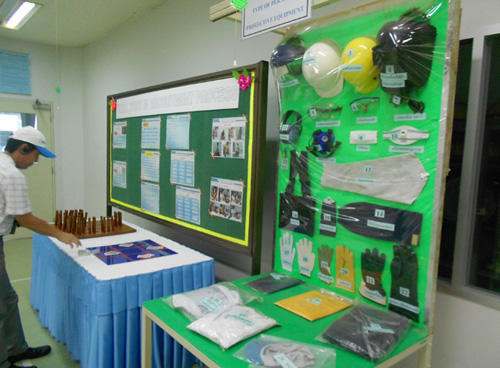 At the safety classroom in a Japanese company in Thailand, workers can learn starting from basics such as types of protective clothing and helmets, as well as how to wear the protective gear. 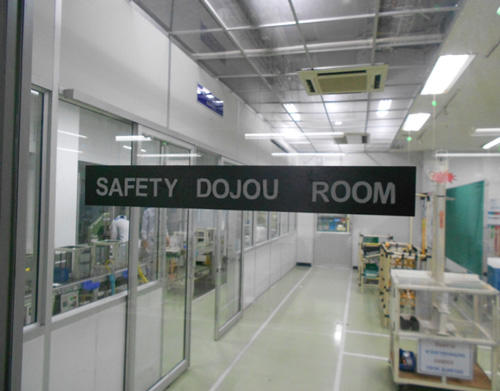 At the Safety Dojou Room, which is a training facility positioned above the safety classroom, workers train for increased safety by repeatedly practicing work tasks.

One factor behind the current unstable political situation in Thailand is the widening disparity among the people. This is not merely economic disparity, but also a disparity in human value. Thailand has largely neglected the will and life of poor and uneducated people because of the misbehavior considered to have been conducted by such people in their previous lives. However, at Japanese corporations, employees at all levels aim for equal learning and proficiency, from low-level workers performing simple tasks to high-level engineers. Efforts are being made to eradicate occupational accidents (which occur with great frequency in Thailand) regardless of whether they involve white-collar or blue-collar workers. No matter the marginal position of a worker, the safety of each and every worker is ensured equally and protective equipment such as helmets, goggles, rubber gloves, and safety shoes is provided. Through safety education which includes the use of such equipment, even people from rural areas who lack sufficient knowledge can learn how to protect themselves. Such efforts will change the awareness toward human value among white-collar workers who come from an elite background. Although changing traditional values pertaining to social status will take a long time, the human resource development of Japanese corporations will be permeated through a spillover effect and be a meaningful step toward reducing disparities.[5]

In Japan, Thailand, and all of Southeast Asia, I believe that further collaborative management based on mutual learning will be necessary to achieve a sustainable society together.

Her current research themes are diversity management and treatment of human rights by Japanese companies in ASEAN countries, as well as the review of management education and management textbooks through the activities of academic societies. Her written works include Management of Sufficiency Societies: Perspectives on Japan-Thailand Collaboration, (2018, Bunshindo Publishing) and Management Lessons from Stories (New Edition): Organization and Society, (2019, Bunshindo Publishing, written and edited by Yuri Kimura and Nobuhiro Tanaka).