Working with a specialization on China

I can still remember how foreign countries seemed distant, scary, and unknown to me when I had just entered university. Even after entering university, I had not defined any specific goals or aspirations.

Around July in the year that I entered university, I heard that a faculty member who taught economics was recruiting students who were interested in visiting Laos. When I went to his office, I was one of only two students who had expressed interest in the opportunity. Initially, I thought that I would be tested for prior knowledge or that I would be refused due to my lack of English ability. However, I soon found myself preparing documents for traveling overseas together with older students.

While in Laos, I simply followed the tour and activities which had been arranged by the faculty member. Even so, I experienced many things, such as visiting local universities, interacting with students, visiting companies, eating, staying at lodgings, and shopping. Although I had studied English, it was always to prepare for tests and I had never actually had a conversation in English. I remember being thrilled when I was actually able to start a conversation with a Laotian university student by asking "Do you know Doraemon?"

This experience was the reason why I became interested in foreign countries, and it is the basis for everything from my university life to my career after graduation and my current life. 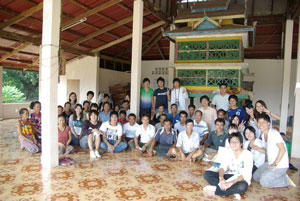 Visiting Laos as part of seminar activities. Through the cooperation of companies and other organizations, I was able to visit a nearby village. It was an outstanding learning experience.

Since I had always lived in Japan--a country where basic infrastructure, health, education, and governance mechanisms have been established even in rural cities--Laotian society felt brand new to me, with both good and bad aspects. After returning to Japan, I developed a stronger interest in learning more about the world and going to various countries. I learned about the FLP International Cooperation Program, which allowed me to study international cooperation across the boundaries of my faculty, and immediately decided to take FLP classes.

Upon entering my sophomore year, I met like-minded students in the FLP program. These students had been interested in international issues since before entering university and possessed a high level of English ability. Inspired by these students, I entered English conversation clubs and spent long vacation periods on trips overseas. I also spent time working a part-time job and had a very busy lifestyle. 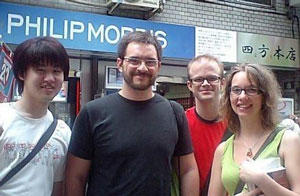 ESS activities. I went into town and introduced myself to foreigners who appeared to be tourists. I then provided tourist information and cultural exchange at their convenience.

In my junior year, I became accustomed to life at university, gained confidence in English conversation, and decided to conduct an overseas survey in Laos together with my highly-motivated fellow students. I was enrolled in the seminar of Professor Mitsuhiro Hayashi, whose guidance policy is that students themselves set assignments, decide on dates, book flights and accommodations, communicate their intentions to the parties or institutions whom they wish to visit, make appointments, and plan surveys. Professor Hayashi views these tasks as a learning experience. We formed teams based on the interests of participating students, and formulated a survey schedule while considering where to ask questions, who to speak with, schedules, funding, and safety. More than twenty students spent longer than six months working to set our schedule for a ten-day overseas visit. Sometimes we even held discussions and prepared until late at night.

As is common in any workplace, careful preparation and communication with stakeholders are essential to obtain necessary information and build required relationships. There are many ways in which my current work is related to the experience of completing a group survey through cooperation from students with different perspectives and circumstances, and then compiling the results in a report.

Through this experience, I fostered a strong sense of fellowship and close relationships with my friends from university seminar, including both younger and older students. We continue to keep in touch even after graduation. In June 2019, when I had returned to Japan for a relatively long time due to work such as the G20 Osaka Summit, I visited the Tama Campus after leaving work. During the time allotted for practical exercises in Professor Hayashi's class, he was gracious enough to allow me to speak with current students on topics including Chinese society and my experiences at the Ministry of Foreign Affairs. Some of my past classmates have left Japan due to work and others have gotten married and are raising children. Although it can sometimes be difficult to make time for each other, we still remain in contact.

3. Entering the Ministry of Foreign Affairs and going to China 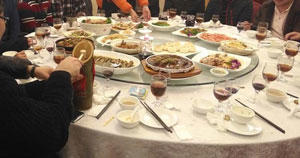 Dining in China. The round table has a rotating platform in the middle. It's customary to order more than you can eat. Alcohol that exceeds 100 proof is often served.

My dream after graduating university was to work in a foreign country. I wanted to speak the native language of that country, learn how citizens think, and understand our differences. Considering these aspirations led me to a career at the Ministry of Foreign Affairs.

While at university, I spent a great amount of time learning about Southeast Asian countries. However, the Ministry of Foreign Affairs assigned me the specialized language of Chinese. Although I was surprised at first, this assignment was not a significant deviation from my goal. During the training period after joining the Ministry, I improved my practical Chinese ability by actively joining the Chinese community during my free time between classes and individual lessons. My experience in Chinese was limited to what I had learned in a secondary foreign language class, so I studied carefully starting from basic pronunciation.

The contents of work at the Ministry of Foreign Affairs are often introduced on the Internet, in books, etc., so I will not spend much time discussing my duties in this article. Thus far, I have traveled to Taiwan, Beijing, Guangzhou, and Qingdao. In each place, I had new encounters, new discoveries, joys, and hardships, all of which are valuable memories. 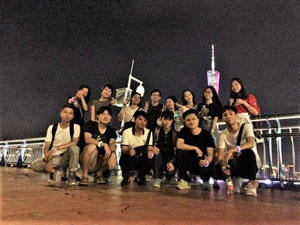 A club for walking through Guangzhou City. In China, it is common for young people to form groups on SNS and host exchange events. They are often surprised when a Japanese person shows up!

Among places which I visited, my longest stay was a three-year stint in Guangzhou, which is famous for gastronomy and the Cantonese language. I have many fond memories of Guangzhou. I made numerous Japanese and Chinese friends. During work, I had the opportunity to interact with many Chinese officials and consular officers from other countries. I spoke Chinese during conversation with Chinese people, while I mainly spoke English with people from other countries. Although the language used might not have been perfect, everyone frankly expressed their political perspectives while drinking alcohol. It was thrilling when both parties in the discussion were able to find satisfaction from a personal point of view, and I was able to feel how successes were based on the accumulation of my past experiences. I also frequently interacted with people from Southeast Asian countries where I previously made many memories.

For many people, living in a foreign country for a long time is rare, and some people do not want to live abroad. Indeed, I understand that life overseas is not a required experience for all people. However, at this point in my life, I find traveling to new places, starting a new life, and interacting with new people all stimulating and, honestly, very enjoyable.

4. Continuing to aim for ideals even after setback

Having read this far, you may have the impression that my work and life have gone smoothly. However, I also faced many frustrations.

I have never been good at studying for examinations. When I first took university entrance examinations during my third year of high school, I failed every single one. Consequently, I had no choice but to spend another year studying and waiting. At that time, I had no other clear goals and felt that I must go to university in order to find my purpose. Therefore, I engrossed myself in studying for exams.

Also, despite accumulating various experiences during three years at university, my employment search did not go as I expected. Ultimately, I simply ended up accepting a position at a certain company which made an offer. Just as I feared, I struggled with the gap between my job duties and the aspirations which I had formed while at university, and I ended up quitting in less than two years.

While I was struggling with my first job, I learned about the opportunity to join the Ministry of Foreign Affairs. Although I had been interested in international relations for a long time, I felt very far away from the world of the Ministry of Foreign Affairs staff and diplomats. Furthermore, I did not possess a high level of language ability (English proficiency). Nevertheless, while recalling what I had heard from many older students who I had met at university and who had become active on the international stage, I continued to aspire to my ideals.

Fortunately, I was hired by the Ministry after taking the first employment examination. I am sure that my parents and relatives had been very worried until hearing about my acceptance.

5. Find something that makes you satisfied 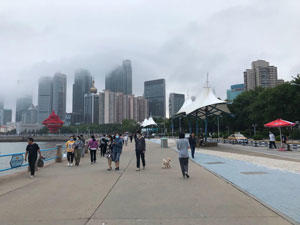 Downtown Qingdao. High-rise buildings are built along the sea. It is often foggy in June.

Now that I am employed at the Ministry of Foreign Affairs, international relations will be the main theme of my life for the foreseeable future. I also have a responsibility as a government employee. Conversely, the idea of living and working in a foreign country which I had envisioned when I was a student is no longer my goal. My vague admiration for overseas has disappeared. As I encountered a variety of ideas, I realized that there is more to life than enhancing my career.

As an employee of the Ministry of Foreign Affairs, I hope that many Chuo graduates younger than myself will accomplish great things on the international stage. However, even if you do not become involved in international relations, I hope that you can draw upon my experiences to find a career which is satisfying and makes you give your best effort. 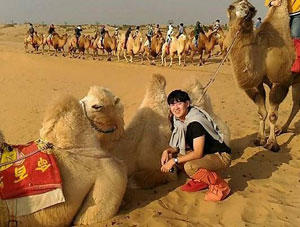 During free time, I took a tour to visit the Inner Mongolia Autonomous Region. I enjoyed riding on camels and horses.

Born in Oita Prefecture in 1989.
After graduating from the Chuo University Faculty of Economics in 2012, Haruka Irie entered employment at a private company. In 2014, he passed the Professional Career Examination at the Ministry of Foreign Affairs. His specialized language is Chinese. After working at the Ministry of Foreign Affairs Second China and Mongolia Division, the Consulate-General of Japan in Guangzhou, etc., he began working at the Consulate-General of Japan in Qingdao from June 2020 (current position).

While studying at Chuo University, he was enrolled in the FLP International Cooperation Program and participated in a seminar (developmental economics) taught by Professor Mitsuhiro Hayashi. During his junior year, he visited local organizations and companies in Laos together with fellow students and conducted a survey by interviewing many people.