Diary of Struggles in Cambodia

1. Cambodia in the early morning 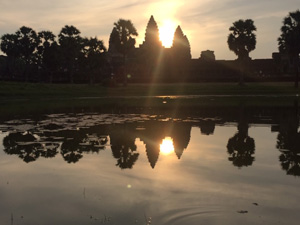 Angkor Wat in the early morning

Mornings start early in Cambodia. Just slightly past 5:00 AM, the cooks at street stalls start grilling the meat on a simple stove, filling the street with the smell of grilled meat and smoke. Men and women of all ages dressed in sportswear gather in open spaces in the city and begin jogging, walking, and dancing in groups to music. In Cambodia, where the average temperature is around 30 degrees Celsius, many people avoid the scorching midday sunshine by starting their activities early in the morning, even before the sun rises. Morning activities are a popular topic in Japan; however, in Cambodia, it is truly a way of life for many people.

2. JICA Project for establishing a foundation of the proper practice according to the Civil Code and the Code of Civil Procedure 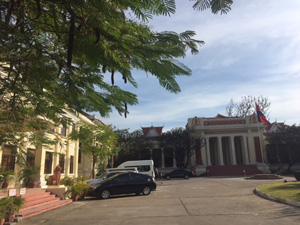 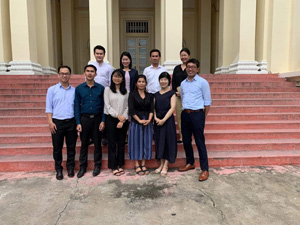 Experts and staff pose for a photograph.
Taken on the stairs in front of the Ministry of Justice.

From March 15, 2019, I have been stationed at the Cambodian Ministry of Justice in Phnom Penh, the capital of Cambodia. As a Long-Term Expert sent by the Japan International Cooperation Agency (JICA), I am involved in a project to support legal and judicial development in Cambodia. JICA Legal and Judicial Development Project for Cambodia began in 1999. In the past two decades, the project has progressed to Phase V. The current project entitled "Project for Establishing a Foundation of the Proper Practice According to the Civil Code and the Code of Civil Procedure" was launched in April 2017. The project consists of activities for ensuring appropriate administrative operation based on the Civil Code and the Code of Civil Procedure which were established through the support of Japan. The lawyer Yoshiko Honma who is also a graduate of Chuo University and to whom I greatly look up to, was involved in drafting the Civil Code and the Code of Civil Procedure as a JICA Expert on Long-Term Dispatch.

The current project consists of the following three activities: (1) drafting civil-related laws and regulations, (2) preparing sample forms such as petitions and judgments, and (3) publishing court decisions of civil cases. For each activity, working groups have been established consisting of Cambodian judges, prosecutors, lawyers, university professors, and staff from the Ministry of Justice. Each working group holds a meeting once per week to engage in intense discussions.

I serve as Chief Legal Advisor and oversee the entire project. I am also in charge of the Judgment Disclosure Working Group. In addition to myself, the project office has three other Japanese experts (a former lawyer, a former judge, and a business coordinator) and six Cambodian staff members. The Cambodian staff gave me the nickname Malis, which means jasmine flower in the Cambodian language (Khmer). I am called this nickname not only by staff members, but also by Secretary of State, Ministry of Justice, who is the project manager. I love my nickname. The Khmer language does not have any character which corresponds to the letter "F" in the alphabet. When I call a restaurant to make a reservation, the other party always has difficulty understanding me when I say "Fumie." Recently, I have started using the name Malis.

Unlike Japan, judgment documents in Cambodia are not made public. Although there are some courts which post judgment documents on bulletin boards in the courts so that they can be viewed publicly for a limited period of time, these is only a portion of courts and the posting period is limited. Furthermore, only parties in the case and third parties who have demonstrated their interest in the case are able to view case records, including the judgment (Article 258, Paragraph 1 of the Civil Procedure Code of Cambodia). Under such circumstances, the Judgment Disclosure Working Group which I oversee is working to make civil judgments publicly available on the Ministry of Justice website.

In August 2019, Prime Minister Hun Sen informed the Minister of Justice Ang Vong Vathana that some lawyers are bribing judges and prosecutors, and instructed the Minister to prevent judicial corruption. I was shocked by this news. The reason for my surprise was that, upon becoming involved in legal and judicial development support in April 2017, I had heard that the Cambodian government did not publicly admit the existence of corruption in the Cambodian judicial system.

In response to the Rule of Law Index 2019, the Press Secretary of the Cambodian Ministry of Justice asserted that there was a problem with the indexes being used and claimed that the rankings were no cause for concern. However, as I just mentioned, Prime Minister Hun Sen pointed out the judicial corruption in this August, only a few months after the Rule of Law Index 2019 was released. Moreover, it became clear that the Ministry of Justice would conduct an extensive investigation on corruption in response to the Prime Minister's orders. This shows that the Cambodian government is serious about working to prevent judicial corruption.

The public release of court decisions of civil cases makes the results of the trial and the related decision-making process available to the public. It is an effort to ensure the transparency of the judicial system. In this respect, public release is consistent with the government's policy to thoroughly prevent judicial corruption. In line with this movement, I would like to promote activities aimed at early publication of civil judgment documents.

4. My own early-morning activities in Cambodia

Daily work in Phnom Penh, including working group activities, can be conducted in Japanese. This is because our office has four excellent Cambodian staff who are fluent in Japanese. These staff provide interpretation between Japanese and Khmer. Nevertheless, it is necessary to speak English when attending large meetings, when talking with other donors, or when there is no interpreter. Every Monday morning at 9:00 AM, a meeting is conducted in English and attended by all experts and staff. Furthermore, daily conversations with Cambodian staff other than those who serve as a Japanese interpreter are also in English. I have been going to an English school since July that was recommended by my friend, because I experienced a great deal of frustration at my inability to express myself with precision. This disappointment with myself motivated me to take action. Since Cambodians are active from the morning, there are some classes which start from 6:00 AM and I am able to attend those classes before starting work. The majority of students in the early morning classes have jobs during the day. During the hours before starting work, I study English with Cambodians who are around 25 years old. Morning activities are a big part of my daily life in Cambodia!

5. Trial-and-error on a daily basis

Prior to being stationed in Cambodia, I had been involved in investigations and trials ever since my appointment in 2005, with the exception of an approximately two-year period during which I worked at the International Cooperation Department at the Research and Training Institute of the Ministry of Justice. Despite my background, I engage in discussions with Cambodian judges at working groups related to civil code and civil procedural code, and I sometimes give lectures at seminars. To be honest, I often feel stressed out.

However, my mindset has changed through a process of trial-and-error at working groups and seminars over the past eight months. Now, when participating in working group discussions as a lawyer, I no longer feel as if I am expected to provide a definitive answer. Instead, I feel that I am expected to provide the perspective of a legal professional, to help organize the matters being discussed, and to provide guidance on possible courses of action. In other words, I provide advice on what to do depending on the position that is being taken. When fulfilling this role, I encourage myself by viewing my ability to empathize with people who do not understand as one of my strengths. Every day, I engage in intensive study and consideration of related laws and literature. Fortunately, I am surrounded by reliable colleagues who are legal professionals. Furthermore, in Japan, I am supported by instructors on subcommittees and advisory groups, instructors at the International Cooperation Department, and senior members of the legal profession. Indeed, there is always someone whom I can consult with.

Overcoming difficulties creates confidence when encountering the next series of new difficulties. My work in Cambodia will continue for another year and several months. During that time, I will continue to work my hardest for the good of Cambodia through a process of trial and error. 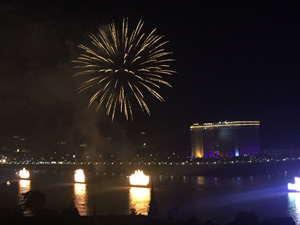 Water Festival on the Tonle Sap River.
The Water Festival is a traditional festival which celebrates the end of the rainy season and the beginning of the dry seasons. During the day, boat races are held on the river. At night, the river is filled with boats bearing illuminated logos of each province in Cambodia.

Fumie Fukuoka
JICA Long-Term Expert
The Legal and Judicial Development Project (Phase V)
Fumie Fukuoka was born in Kanagawa Prefecture in 1981.
In 2004, she graduated from the Department of International Law and Business in the Faculty of Law, Chuo University.
After assuming a position as prosecutor in 2005, she worked at local prosecutor’s offices in Yokohama, Kushiro, Tokyo, Sendai, Akita, etc.
In April 2017, she entered the International Cooperation Department at the Research and Training Institute of the Ministry of Justice, and since then, has worked on legal technical assistance for countries in Southeast Asia.
Since March 2019, she has been stationed at the Ministry of Justice of the Kingdom of Cambodia as a JICA Long-Term Expert (current position).