Memoir of the Egyptian Justice System

I graduated from the Chuo University Faculty of Law in 1964, registered as a lawyer in 1968, and in the same year joined Tadashi Hanai Law Office. Dr. Takuzo Hanai, the father-in-law of Tadashi Hanai, was a member of the first graduating class at Igirisu Horitsu Gakko (The English Law School), which was the predecessor of Chuo University. Takuzo was active as a lawyer and politician throughout the Meiji, Taisho and Showa Periods, and he was said to be the top criminal defense lawyer in Japan. One of the founders of Igirisu Horitsu Gakko was Dr. Nobushige Hozumi, a prominent figure in Japanese legal circles. Nobushige brought a statue of the Roman legal scholar Cicero back to Japan after a trip to Rome, and after keeping it in his study for more than 20 years, he gave it to Takuzo because he felt that Takuzo shared some similarities with Cicero. The book Bengoshi Hyakunen (100 Years of a Lawyer) issued by the Japan Federation of Bar Associations also describes Takuzo as "the best known lawyer in Japan." Takuzo's life was depicted in detail in the series entitled Hana no Benron (Master of Legal Discourse), which was published in the Yomiuri Shimbun newspaper and written by Shofu Muramatsu. Takuzo possessed a rich international perspective and was instrumental in enacting the 1928 Jury Law that led to the current system of lay judges. Tadashi served as an attorney in the May 15th Incident, and also defended and proved the innocence of Takeru Inukai (who later served as the Minister of Justice) when he was charged in the Sorge Spy Incident. Tadashi also defended the former Prime Minister Koki Hirota in the Tokyo Trials. This legal defense was depicted in Saburo Shiroyama's War Criminal: The Life and Death of Hirota Koki. Tadashi was later asked to hold a series of important posts, including Prosecutor General. At Chuo University, he taught criminal law and was known as a teacher possessing deep knowledge of foreign law due to his experience studying abroad at the University of Berlin and the University of Vienna.

Today, the internationalization of lawyers is necessary. Although there are many Japanese lawyers active in Western countries and Asian countries, there are very few who are active in the Middle East using Arabic.

I started learning Arabic at the age of 67 because of my personal interest in the Middle East. Eventually I became able to read texts with a dictionary. I belong to the Research Subcommittee on Modern Middle Eastern Law (hereinafter "the subcommittee"), which was established in 2012 in the General Law Institute of the Dai-Ichi Tokyo Bar Association. After the subcommittee was established, we began translating all 1,149 articles of the Egyptian Civil Code.

To this end, Genichiro Fukuchi, the First Secretary of the Ministry of Foreign Affairs (later active as a journalist, author, and politician), joined the Iwakura Mission in 1873 and visited Nubar Pasha, the Foreign Minister of Egypt, in Istanbul. In 1874, the Meiji Government translated various codes (drafts), including Egyptian civil law and criminal law. However, in 1886, Nubar advised Takashi Hasegawa (an appeals court judge), who visited Cairo, to give the national government authority in appointing judges. Nubar gave this advice based on his distrust of Western judges. Ultimately, Japan did not adopt mixed courts.

Japan abolished its consular courts in 1899. However, Egypt did not abolish the mixed courts where Westerners participated in hearings until 50 years later, when the Egyptian Civil Code was enacted in 1949. An Egyptian researcher informed me that Nubar Pasha had not left any written record of the advice he had given to Hasegawa at a Japanese Embassy reception discussed later in this article. The reason why a politician who later served as Prime Minister gave Hasegawa advice of which he could not leave any written record in his own country was in the hope of preventing Japan from falling into the same predicament encountered by Egypt.

The author (left) and former Ambassador Katakura (right) in the judge's bench at the Court of Cassation.
The sign over the bench is shaped like scales and reads "Justice is the Foundation of a Nation."

In May 2017, the subcommittee translated all 1,149 articles of Egyptian Civil Code. The most difficult part of translating Arabic legal terms is that traditional Islamic legal terminology is used in current law. Also, two or three words in the Arabic language may be only one word in Japanese, with the reverse also being true. Since legal terms are related to the generation and disappearance of legal efficacy, the subcommittee engaged in extensive discussion over the translation of single phrases. As a result, we became keenly aware of the need to investigate the current Egyptian justice system.

Fortunately, when investigating the Egyptian justice system, we were able to ask for cooperation from former Egyptian Ambassador Kunio Katakura, who was the husband of the late Professor Motoko Katakura, of the Chuo Faculty of Policy Studies. As a result, we were able to receive support from the Ministry of Foreign Affairs. In December 2018, we joined a delegation of thirteen members to Cairo consisting of lawyers, professors, and other professionals, including former Ambassador Katakura. In Cairo, we visited the Ministry of Justice, the Court of Cassation, the Court of Appeals, the Prosecutor's Office, the Arab Lawyers Union, Cairo University, the American University in Cairo, Ain Shams University, and the JETRO Cairo office. This visit was also reported in Egypt.

Courts, the Prosecutor's Office, and the Ministry of Justice

In the Court of Appeals, the parties to the case and the attorneys responded verbally to questions raised by the presiding judge. Numerous cases were processed one after another. During a meeting with the Chief of Appeals, we received questions regarding criminal justice procedures in Japan. Egypt has defined a detention period based on criminal facts, so the Chief was surprised that Japan has a bail system, yet the detention period could be extended by renewal.

The Court of Cassation was large and dignified, and the presiding judge radiated a stern aura. The sign over the judge's bench quoted verses from the Quran: "In the name of Allah, The Most Gracious, The Most Merciful" and "Allah commands that when you judge between men, you judge with justice" (Chuko Classics, Quran 1, translated by Katsuji Fujimoto et al.). It also bears the statement "Justice is the Foundation of a Nation" (translated by the author).

At the Prosecutor's Office we received explanations from the Vice Attorney General on the office's organization, investigations, trials, and enforcement. In terms of criminal justice procedures, Japan adopted some parts of British and American law after World War II, based on continental law. However, I felt that Egypt had a system closer to continental law. Unlike Japan, Egyptian lawyers are also involved in the execution of the sentence and witness the execution of the death penalty. Although prosecutors are publicly recruited, all prosecutors conducting investigations are male for security reasons.

Also at the Ministry of Justice, we met with the Deputy Minister of Justice and I expressed our sincere gratitude for accepting our visit.

The Arab Lawyers Union in Cairo was established in 1944, the year before the League of Arab States was established in 1945. The League of Arab States can be described as the Arab version of the United Nations. In 1944, many lawyers were involved in the Arab independence movements. Upon listening to explanations from attending officers, I felt the importance of lawyer independence and the sense of unity among Arab lawyers. One difference from Japanese lawyers is that Egyptian lawyers have their authority determined based on an examination regarding their years of experience, legal training and other factors. Furthermore, although Japanese lawyers are not allowed to attend interrogations, Egyptian lawyers are.

Cairo University, the American University in Cairo, and Ain Shams University are among the top universities in Egypt. Each of these universities has its own unique characteristics and many international students. While focusing on civil law, we exchanged opinions on Islamic law, the content of legal courses, including comparative law, and training/education for legal professionals. 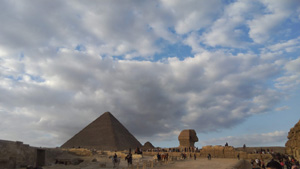 We visited the JETRO Cairo office to find out how the administration of justice influences socio-economic life in Egypt. The Director of the office explained the political and economic situation in Egypt. We also learned about activities by Japanese concerns, including involvement in the construction of the Cairo Metro and the Grand Egyptian Museum.

On December 5, I gave a presentation at the Japanese Embassy on the legal relationship between Japan and Egypt from a historical perspective. About 100 local legal professionals and university officials attended my presentation. Furthermore, the Embassy held a reception that was a great success.

Our delegation was met with acts of kindness everywhere we went. For example, old friends of former Ambassador Katakura held a welcome party. Our visit was possible thanks to the support and cooperation of former Ambassador Katakura, current Ambassador in Egypt Masaki Noke, and staff of the Japanese Embassy. We would like to express our gratitude to everyone involved. We hope that the results of our visit will be useful for translating the Egyptian Civil Code.