Feelings Imbued in the Commencement Speech

Mika Matsumura, a graduate from the Chuo University Faculty of Economics, gave the commencement speech at the 136th Chuo University Graduation Ceremony (2018 Academic Year) and Conferment of Master's Degrees to Graduate Students in March 2019 (Faculty of Economics, Faculty of Commerce, Faculty of Policy Studies, and related graduate schools). After graduating university, Matsumura served as a Japan Overseas Cooperation Volunteer. Today, she works as an international development consultant and also as an author. We interviewed Matsumura on the feelings which she put into her commencement speech, the meaning of the commencement ceremony, and her message to students.

"When I was a student, I declined to participate in such a glamorous graduation ceremony."--In her commencement speech, Matsumura explained the reason that she was unable to participate in her own graduation ceremony. Her father had passed away during January in her second year of university. As a result, Matsumura started to help with her family's printing business. She spent all of her time working at the printing business during the day and performing volunteer activities at a foreign student dormitory at night. Matsumura had almost no time to go to school. Although she managed to graduate, she felt uneasy about not being able to put her full efforts into studying.

"Although I had friends at university, I felt as if I were a little different from everybody else," she recalls. "This left me feeling alienated. I have many regrets about my time at university."

On the day of the graduation ceremony, she pretended that she would go to the ceremony and took the day off from work. Ultimately, she celebrated graduation by herself on Shichiri-ga-Hama Beach in Kamakura, sitting alone and gazing at the horizon.

"Somewhere inside myself, I could hear a voice urging me to never give up," says Matsumura. "Even today, I can still picture the scenery of the beach on that day." 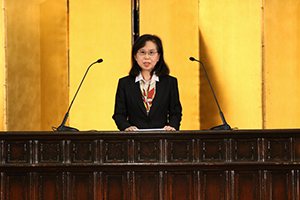 "Have a mental state which is akin to a combination of delicate, beautiful silken thread and strong, coarse rope."--This was Matsumura's farewell message to students graduating in March. Actually, when Matsumura's mother graduated from a girl's high school in Kumamoto, the principal had said these words as farewell message. In turn, Matsumura constantly heard these same words from her mother.

Why did Matsumura choose these words for her message to graduates? Perhaps her memories of that beach in Kamakura form part of the "coarse rope" that exists inside her.

Matsumura never asked her mother the extent that these words had influenced her mother's way of living and life. "Even so, my mother also possessed the spirit of never giving up," reflects Matsumura. "For example, after I went abroad as a Japan Overseas Cooperation Volunteer, my mother oversaw the printing business by herself."

In many ways, Matsumura's time at university did not go as smoothly as she had hoped. However, she was greatly influenced by foreign students at a dormitory where she helped as a volunteer.

Experiences as a Japan Overseas Cooperation Volunteer--"I was the one who was saved." 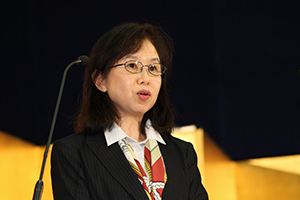 "Interacting with foreign students was the most important thing for me," recalls Matsumura. "Each one of them was different. Each of them was in a unique situation, and some of them faced financial difficulties. Through discussions with foreign students, I became aware of aspects of Japan which I had never noticed before. I found this stimulating and enjoyable. When I heard them discuss life in their native countries, I felt the desire to actually visit those countries." Acting upon her desires, Matsumura visited Thailand, Singapore and Malaysia while still in university.

"To be honest, when I went overseas as a Japan Overseas Cooperation Volunteer after graduating university, it was more like I was running away from something than going to help someone," explains Matsumura. "I felt so much pressure to support my family and guilty towards not having been able to apply myself to my studies. Instead of being among radiant young Japanese people, I felt more comfortable being overseas. It was easier for me to identify with people who had been through hardship. In some respects, the people whom I met in developing countries saved me more than I ever helped them. Whenever discussing her work overseas, Matsumura constantly mentions how she was saved.

"Making mistakes while you are young is important for building a strong character," she says. "It makes you resilient." Matsumura always repeats how it is easy to correct your mistakes when you are young. Her book Family Strategically Thinking of Finance after Retirement! portrays the character Sora, who becomes depressed and quits his job at a bank. Although Sora temporarily drops out of society and falters, he is ultimately able to find his own path in life.

Matsumura compares troubles which must be overcome to climbing mountains.

"Instead of repeatedly climbing the gentle slopes of Mount Takao, a novice climber should attempt the steep precipices of Mount Yari. Although you will undoubtedly fail, the attempt itself will give you direction and teach you the limits of your abilities. Taking on challenges which are slightly beyond your abilities will provide you with valuable insight. You will learn your own limits and become able to control yourself."

By making mistakes, learning about yourself, and applying what you learned to your next attempt, you will gradually become able to climb a high mountain. Fixing your gaze on a lofty peak will make it easier to give your best effort.

Be strong and survive 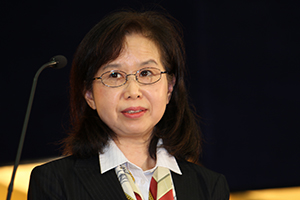 Working as a development consultant is also a series of challenges. Every time, Matsumura must work on a new project in a different country. For example, even for similar projects on power development, social needs are different in countries such as Nepal and Cambodia. "I can never simply repeat what has been done before," explains Matsumura.

During your life, you will sometimes feel like you are stuck in a rut or are unable to lead your ideal life. Some days, you may make a mistake and become depressed. There may be some students who feel like they are being swept along in the expectations of others--entering university without a clear goal in mind, and then starting uninspired work at a company after graduation.

"My message to such young people is to enjoy doing more things," says Matsumura with great conviction in her voice. "I want you to learn how to create a sense of enjoyment within yourself. This also applies to studying, as well as to everything that you see and hear. You only live once, so never worry about making mistakes. It is better to have some ups and downs in your emotional state instead of always being emotionally subdued. Recently, I am focused on enjoying life and having enough experiences to last three lifetimes!"

At the graduation ceremony in March, Matsumura ended her commencement speech as follows: "I hope that each of you will live a life of your own choosing to the fullest." She encouraged graduates to always stay strong and survive.

Mika Matsumura
Mika Matsumura graduated from the Chuo University Faculty of Economics in March 1985. She currently works as a development consultant and author. After graduating from university, she joined the Japan Overseas Cooperation Volunteers. She worked in countries throughout the world as a development consultant specializing in the socioeconomic fields of power, medicine, roads, and farming village development. Based upon her experience and knowledge as a consultant, she also works as an author. She won the 1st Shiroyama Saburo Economic Literature Prize for her work The Song of Lolo Jonggrang (published in March 2009). Since this April, she has taught a course on overseas internships as a Visiting Professor in the Chuo University Faculty of Economics. 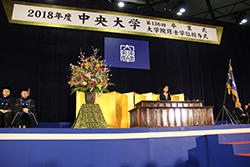