Working as an Attorney at Tochigi City Government

1. Ending up at the city government by strange coincidence 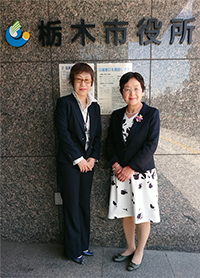 Together with Mayor Okawa (right)

After graduating from university, I had always worked in the real estate industry. During that time, I experienced turbulent economic times such as the collapse of the Japanese economic bubble and the Bankruptcy of Lehman Brothers. When my employer went bankrupt, I decided to get certified as an attorney and enrolled at the Chuo Law School. Even after becoming an attorney, I worked for a while as an in-house attorney at a real estate company in the middle of Tokyo, handling buildings and funds. I find the real estate business extremely interesting.

On the other hand, I wondered if I was truly being of benefit to society. I felt a vague uneasiness towards the direction that Japanese society and the world in general was heading. By no means do I fully understand the teachings of the "god of management" Peter Drucker or the public theory of Jurgen Habermas or Hannah Arendt; however, I believed that the ultimate meaning of working is to contribute to the public good.

Since I am not a politician or the founder of a major corporation, I struggled to think of how I could achieve the lofty goal of contributing to society. My interest was sparked when I learned about working as an attorney for a municipal government.

When browsing the homepage of the Japan Federation of Bar Associations, I noticed that Tochigi City was recruiting. I was interested in the position because my parents, both of whom are in their 80s, live in Utsunomiya City about 20 kilometers from Tochigi City. Thankfully, they are still both healthy, but who knows how long their good health will last. For me, working in Tochigi City was appealing because it would allow me to live close to my parents. Incidentally, Utsunomiya City, which is the prefectural capital, is not hiring attorneys at the city government. Perhaps this is because the prefectural office and a court are located near the city government, so there are already numerous attorneys in the area.

For the reasons discussed above, I decided that it was good timing for me to accept the position in Tochigi City, and I became an attorney at the city government one year ago.

2. What kind of place is Tochigi City? 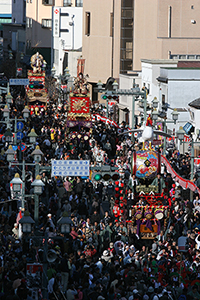 With a population of about 160,000, Tochigi City is an average-sized Japanese city. The city is located in the southernmost part of Tochigi Prefecture. It is approximately 75 kilometers from Tokyo, or about one hour by car. Due to easy accessibility from Tokyo, there are many golf courses in the area. The main industry is agriculture and the region is famous for fruits such as strawberries, grapes, and pears.

In the Edo Period, Tochigi City prospered through transportation due to its location along rivers leading to Edo. Traditional neighborhoods and buildings that escaped destruction during World War Two are now preserved and featured as a town of storehouses. These neighborhoods are known as Little Edo and are a popular tourist attraction. I am looking forward to scheduled development projects including a composite commercial facility including a hotel in front of the train station, a literary museum, and an art museum.

Similar to other regional municipalities, Tochigi City is working to encourage people to move to the area. The comfortable lifestyle offered by Tochigi City is evident by the city's ranking in the 2019 Ranking of Best Country Living (February edition of Country Living Book, published by Takarajimasha). Tochigi City was ranked first in the division for young families and second overall. 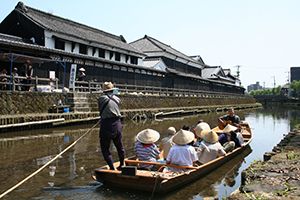 Tochigi City is a peaceful city that is blessed with rich nature and culture. Nevertheless, just like any other region, it faces a variety of problems. For the benefit of citizens, city government performs a wide range of work which includes resolving school bullying, providing public assistance and nursing care, administering and issuing family registers and resident certificates, handling requests for administrative grievances regarding information disclosure, dealing with accidents and harassment, taking care of copyright issues, collecting utility fees, conducting bidding, and resolving negotiation issues for road acquisition.

I have worked in the real estate industry for many years. As such, I had been confident in having handled a wide range of projects including the development, sale, and leasing of properties including condominiums, buildings, hotels, nursing care facilities, commercial facilities, and logistics facilities. However, real estate work at the city government covers a wide range of properties, particularly in the public sector; for example, farm land, forests, roads, rivers, water and sewage, cemeteries, industrial waste processing plants, solar power development, and crematoriums. In many cases, city government is in the position of issuing development permits, so we also handle requests for administrative review of revocation. This creates the opportunity to view projects from a different perspective, and has allowed me to rediscover the appeal and public nature of real estate and development.

When I had studied the Administrative Procedure Act (administrative procedure ordinances in regional governments) in preparation for the bar examination, I encountered difficulty forming a clear image and found the material quite dry. However, after I actually started to work at city hall, I realized the great importance of performing procedures appropriately. Unlike civil contracts in which agreement among the parties is sufficient, administrative disposition is an authoritative act. With this in mind, I realized the significance of provisions listed in the Administrative Procedure Act (ordinances)--as is only natural.

There are problems with government methods for problem resolution. Administrative orders are not effective for illegal dumping of industrial waste or sediment, for incessant complainers, or for unreasonable demands. Furthermore, it is difficult to fulfill requirements for administrative substitute execution and there are high barriers for filing a lawsuit from the administrative side; for example, resolutions must be passed by the city assembly. In an attempt to resolve such problems, I consult with my acquaintances who are attorneys in other municipalities, local attorneys, the police, and other entities. Even so, the problems are quite difficult and I am often bewildered.

4. People in my workplace 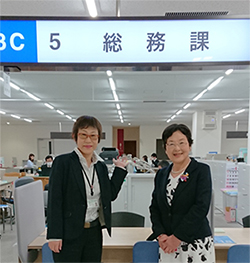 I work closely with the mayor and vice-mayor, so I feel the real difficulty of implementing city policy. I wish I could be of greater assistance, but I am still in the process of learning and unfortunately lack sufficient ability.

Everyone working at the city government is extremely intelligent and skilled. The way in which work is performed differs in many respects from private corporations. Although we are expected to reduce costs and increase efficiency, we don't have to worry about sales or profits (as is only natural). When working at government offices, mistakes are unacceptable, so we always conduct extensive analysis before starting a project. Strong emphasis is placed on format and procedures, which means that a certain amount of time is required to perform work. Perhaps due to the importance of official documents and a delay in implementing IT, we still rely on paper documents. It is impossible to fully implement IT for all citizen procedures at the current time because many of our residents are elderly. We also lack the budget for introducing IT.

On a personal note, the workers at city hall are very friendly, and my work enables me to be involved in issues at various departments in city hall. I am invited to have drinks or play golf with employees at other departments, and I truly enjoy myself--for which I am very grateful.

5. City in which women play a leading role

Although Tochigi City is a regional city, I am proud at how women actively perform in our society.

There are still some municipalities which do not have a single female member in their city assembly. In Tochigi City, 4 of the 29 assembly members are women. These women fulfill an active role in assembly activities.

At city hall, there are two female department managers, female section managers in a variety of departments, and a large number of female assistant managers. There are even some female employees who requested to be involved in measures to prevent damage by wild animals. When selecting members for various committees, guidelines have been established to aim for at least a 35% ratio of female members.

Please expect great things from the capable and strong women of Tochigi City!

6. Life is about embracing new challenges

Other municipal attorneys who have completed their term of service follow a variety of paths. For example, they may extend their term, transfer to another municipality, become employees of city hall, return to their hometown and work as attorneys, or become assembly members in their hometown. I still have two years remaining for my term of service. During that time, I will actively engage in as many different types of work as possible and continue to embrace new challenges.

7. Message for people considering working as a municipal attorney 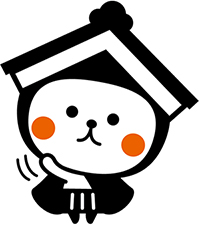 Tochi-suke, the mascot of Tochigi City

An increasing number of national government offices are recruiting internal attorneys in the hope of leveraging special expertise. However, attorneys working at municipalities are in the closest position to residents, and therefore have different work duties and expected roles. When working for a regional municipality, residents and project sites are located nearby. This work environment requires both theory and actual practice, as well as the ability to adapt to changes flexibly.

Also, when considering lifestyle changes and future career path, many people may have difficulty commuting to work in a regional city. Since most national government offices are located in Tokyo, such issues are not a concern. On the other hand, there are some attorneys who choose to work in a region where they have no family or ties. Personally, my only link with the region was that my parents live in the nearby city of Utsunomiya. If not, I may have considered working in a municipality that is engaging in land acquisition or neighborhood reconstruction in order to recover from the Great East Japan Earthquake.

While it would be imprudent to say that working in a different municipality creates a "feeling of traveling," I would recommend that you consider working as a municipal attorney if you want a little more freedom in your life or if you want to give back to society.