Travelogue in the Republic of Malta and the U.S. during Sabbatical Leave

It was 2018 when I decided to take a sabbatical. A sabbatical is a one year leave for researchers. Sabbaticals can be used for any specific purpose; travel and research in other fields are allowed. Sabbaticals are an opportunity for brainstorming. They allow researchers to leave their normal environment and get new ideas.

When I looked back over my journey from aspiring to becoming an attorney until the present time, I was happy with how I graduated from university in three years, concentrated on preparing for the bar exam, and devoted myself to each case as an attorney. However, I came to feel that I was engulfed by immediate matters and failed to direct my awareness towards my own life and my future. Also, I noticed that my perspectives became narrow and I lacked time to think about new things; indeed, my days were spent commuting between work and home. The legal world has changed dramatically during the ten years since I first aimed to become an attorney. When I looked at senior attorneys who were exhausted by the daily grind of cases, I became worried about whether the conventional way of working would be best for me.

Ultimately, I decided that I needed sufficient time in a completely different environment to engage in contemplation and develop new ideas. Upon receiving permission from my office, I decided to take a sabbatical of about ten months as unpaid leave. Specifically, I spent time in the Republic of Malta and the U.S. In this article, I would like to discuss my experience and impressions of a sabbatical. 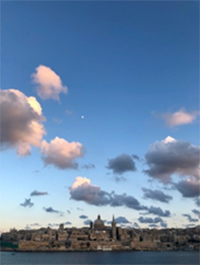 Scenery in Valletta (capital of the Republic of Malta)

I attended a language school in the Republic of Malta (the official languages are Maltese and English) for about three weeks. On my way to the Republic of Malta by flight, my luggage was lost, so I had to speak English with airport staff immediately upon arrival. Although I got my luggage back safely two days later, I had been at a loss as to how to negotiate with the unhelpful airport staff--such customer service is unthinkable in Japan. During my time in Malta, I enjoyed swimming in the Mediterranean Sea with my Russian roommate almost every day, which was only a three-minute walk from our apartment. While enjoying my roommate's homemade borscht, we talked about each other's country, job and life. 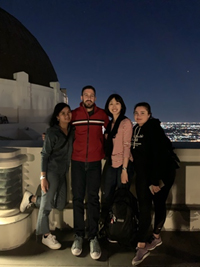 At the Griffith Observatory in Los Angeles

In the U.S., I decided to participate in programs at the University of California Irvine (hereinafter, "UCI"). Specifically, I chose a language study program and a business program.

The language study program was divided into classes on reading comprehension, grammar, and conversation. I was surrounded by good teachers in each class. In addition to studying language, I learned a great deal from teaching styles that my instructors used to keep students from around the world interested in their studies. Especially, Mr. Roger Dupuy from the conversation class helped me out a lot. He was very enthusiastic, and his view of things and expressive style encouraged me to learn. Most students in the class were from the Middle East and Asia. Some working adults also participated in the class. Regardless of our different nationalities, I was able to communicate with people who caught my interest despite my poor English ability. It was a precious experience. These experiences enabled me to dispel the barrier which had caused me to see foreigners as strangers from different countries. I could feel my world view expanding. 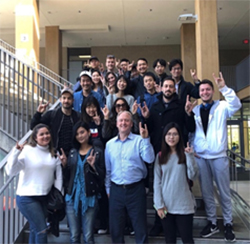 Group photograph from the business program

Next, I participated in the business program. I learned fundamentals of MBAs such as marketing, finance and planning. A core value of the law office where I work is to think together and cooperate with clients. In addition to legal advice, I would like to help clients devise business strategy. In this respect, the contents of the course were very useful to me. My instructors had 20 to 30 years of experience or over in international business. Therefore, classes were extremely practical and enlightening. I learned business practices and the basis of thinking in the U.S. Students were responsible for giving presentations in the classes, so I prepared after school by conversing in English with strong-minded classmates. The classes focusing on presentations were extremely edifying.

Also, while studying in the program, I became acquainted with many Japanese businesspeople. These businesspeople were around 30 years old and had been sent to participate in the program by major Japanese corporations. I asked them many questions about their work at corporations. Conversely, explaining about my own work as an attorney was an opportunity to reconfirm my passion for my work and determination which I made to choose my current job.

At the Grand Canyon

During my sabbatical, I spent such fulfilling time every day that I cannot describe everything in this article. While staying at UCI, I shared a student apartment with people from other countries. There were some tough times; for example, one of my roommates ate the bananas that I bought, while other roommates had a fight that ended with one of them moving out. I traveled as much as possible given my time and budget. I walked a steep mountain path for hours to bathe in a hot spring unlike anything I have ever experienced, even in Japan. I rode on buses for long hours to go sightseeing at the Grand Canyon and San Francisco. I also visited the east coast during my stay in the U.S. I had various experiences such as visiting a world-class cancer laboratory thanks to an introduction from a friend living in New York. I even snuck into a club exclusively for graduates from Harvard University. 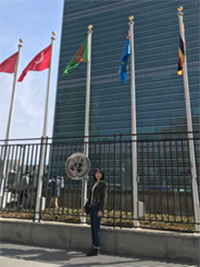 In front of the United Nations in New York

During my flight back to Japan, I watched the movie Christopher Robin. In the film, Winnie-the-Pooh says that "doing nothing often leads to the very best of something." I feel that a life filled with urgent and immediate matters prevents me from developing creative ideas needed in this competitive society. Thanks to understanding from my office, my time spent abroad was not an assignment and was not related to work; instead, I was able to select my own interests and experience an environment completely different from my work.

As a result, I had opportunities to meet various people and acquire new knowledge even more than I had expected. Without being pressed by what was in front of me, I was able to contemplate myself and my work, and to absorb new experiences. Consequently, I developed ideas for desirable services and operational efficiency. The sabbatical enabled me to deepen my self-understanding and look at things with an open mind. If I studied abroad as a part of job and followed the instructions of my company and office, I would not have been able to create such new ideas.

Through my experiences on sabbatical, I realized that time spent doing nothing may just be extremely important in today's world.

5. Chuo University has a strong presence throughout the world 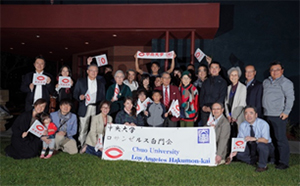 On a final note, I participated in a New Year's party of the Los Angeles Hakumon-kai on January 26 of this year. Although I asked to participate suddenly on the day of the party, I was welcomed warmly. The party was attended by the Shota Iizuka, a silver medalist from the Rio Olympics, as well as his coach Yasuhiro Toyoda. Another guest was Rio Hidaka, the first Japanese heavyweight champion. Starting with Chairman Nakabayashi, members of the Hakumon-kai discussed their experiences living in the U.S. While listening, I realized that there are various ways of living and choices beyond what I and other people may view as commonplace. Also, I was reassured by the strong presence and support of Chuo University throughout the world.

Yuki Kitamura
Attorney
Yuki Kitamura was born in Hyogo Prefecture.
She graduated from high school of Obayashi Sacred Heart School.
She graduated early from the Department of Law in the Faculty of Law, Sophia University.
She completed the course in the Chuo Law School.
She has been employed at Shindo & Matsumura Law Office since January 2015.
(Member of the Daini Tokyo Bar Association)