Recently, the use of online tools has been the topic of many discussions. While continuing to serve as a judge at the Tokyo District Court, I've been dispatched to Chuo University Law School as an expert faculty member to teach practical law courses. Both in the classes that I teach and in my work as a judge, I'm required to make effective use of online tools.

At Chuo University Law School, I am teaching a subject called "Fundamentals of Civil Litigation in Practice" for the second semester of 2020. Divided into two classes, this subject is compulsory for second-year students and its objective is to bridge the gap between theory and practice by utilizing case problems and records of mock legal proceedings to provide a foundation for civil litigation.

The first class was held on September 25. Students who were able to commute to the campus attended a face-to-face class while those who were unable to commute participated in the class online by watching a video broadcast of the class. This was all done through a process of trial and error, but we managed to successfully complete the first class. Some of the challenges that we faced included the difficulty involved in getting the microphone to pick up comments made by students in the classroom (resolving this is dependent on how skillfully the teacher can repeat the students' comments) as well as the network environments of the students participating online. Nonetheless, this method remains one of the effective options currently available for enabling students to take classes online while ensuring the benefits of an interactive class environment.

3. Use in civil litigation

With regard to the courts, telephone and video conferencing systems have been in use in civil litigation since the current Code of Civil Procedure was implemented in 1998. This year, a new procedure for conducting Proceedings for Arranging Issues and Evidence by using IT tools, such as web conferencing, has been put into practice[ii]. This procedure was first implemented in February 2020, starting with the Intellectual Property High Court and the eight main offices of the district courts where Japan's high courts are located (nine offices in total, including those in Tokyo and Osaka). In May 2020, the procedure was then implemented at the main offices of the district courts located in Yokohama, Saitama, Chiba, Kyoto, and Kobe (five offices in total). Going forward, there are plans to implement the same procedure in the main offices of other district courts from December 2020. 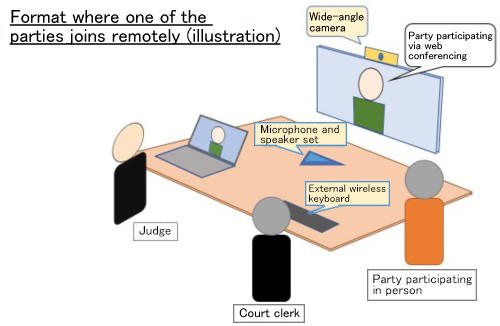 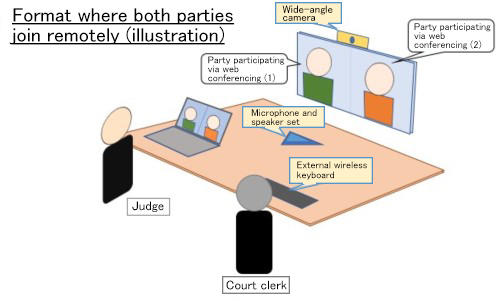 The procedures mentioned above are based on the current stipulations of the Code of Civil Procedure, which make it difficult, for example, to utilize web conferencing systems on the date of Oral Arguments.

To address this point, discussions have been held within the Research Group on IT Solutions for Civil Trial Procedures since July 2018. These discussions resulted in the publication of a compiled report in December 2019[iv], and the Code of Civil Procedure Subcommittee (IT-Related) was established in February 2020 by the Legislative Council of the Ministry of Justice[v] to study and deliberate on this matter[vi]. At the third meeting, discussions were held on possible changes to the rules, including those related to the use of web conferencing systems for Oral Arguments on court dates, the creation of special proceedings, and the streamlining of Proceedings for Arranging Issues and Evidence. Public comments will be made in the future, and we'll need to pay close attention to such comments as we proceed with discussions to that end.

As described above, online tools are being used in the classroom as well as in the courtroom, and environmental improvements are being made to promote greater utilization. However, the circumstances in each case are different (e.g., the software and communication environments differ between law schools and courtrooms, there are differences in terms of the system restrictions, and there are differences in terms of the considerations that apply for small classes versus larger classes). It's important to explore what the best solution is in any given situation.

There are also situations where face-to-face meetings work better. In a classroom environment, it's easier to conduct interactive classes for large numbers of students in a face-to-face format. It's also easier to hold discussions outside of class in this format (e.g., some of the real duties of a judge are difficult to fully discuss in a classroom). Also, if there's a dispute in court about whether or not a contract has been forged, it's necessary for the court and the parties involved to meet in person to confirm the original written agreement and there are other situations where it's better to conduct court-mediated settlements face-to-face. Needless to say, however, in the context of COVID-19, we face a major challenge in preventing the spread of the virus in face-to-face settings.

This is a perpetual cause for concern, but it's crucial that we think carefully about what the best practices are in any given situation, whether in the classroom or the courtroom.

[i] This article reflects the personal opinions of the author.
[ii] Kenichiro Tomizawa, et al.: "Web Kaigi Nado no IT Tools wo Katsuyo Shita Soten Seiri no Arata na Unyo" ("New Operation of Proceedings for Arranging Issues and Evidence Using IT Tools Such as Web Conferencing"), Kinyu Homu Jijo (Financial Law Journal) Issue 2137, p. 6.
[iii] According to a report issued by the General Secretariat of the Supreme Court (http://www.moj.go.jp/content/001328516.pdf). The breakdown is as follows: 367 Preparatory Proceedings, 966 Written Preparatory Proceedings, and 98 others (number of cases reported as of August 31, 2020).
[iv] Website of the Japan Institute of Business Law: https://www.shojihomu.or.jp/kenkyuu/saiban-it
[v] Website of the Ministry of Justice: http://www.moj.go.jp/shingi1/shingi03500036.html
[vi] Website of the Ministry of Justice: http://www.moj.go.jp/shingi1/housei02_003005.html

He was appointed to his current position in 2008. He has served on the Kofu District Court; the Railway Bureau of the Ministry of Land, Infrastructure, Transport and Tourism; the Yokohama District Court; the Iwamizawa Branch of the Sapporo District/Family Court; and the General Secretariat of the Supreme Court. In April 2020, he was put in charge of civil litigation cases at the Tokyo District Court and began teaching classes at Chuo University Law School.