Human Library as an Educational Method for Fostering Diversity

Today, we aim to build a society where people from various cultural backgrounds can live together and where diversity is respected. This awareness is also growing in universities, with Chuo University issuing a diversity declaration in 2017 and opening the Diversity Center in 2020.

What is the current level of awareness among students? Many students who grew up in a homogenous society may not feel familiar with these topics or find them relevant in their lives. To deal with the situation, I mainly focus on diversity and inclusion in my introductory seminar for first-year law students. In this year's seminar, the students took the initiative to plan and implement an Online Human Library event. In this article, I will introduce class activities, and explore educational methods, that foster diversity.

The Human Library started in 2000 at a rock festival in Denmark and this interactive event has now been held in about 90 countries around the world. It is also known as an interactive library that lends out "living books", and is composed of people who play the roles of librarians, books, and readers. The purpose is to foster diversity through dialogue, with the people who tend to be on the receiving end of misunderstandings and prejudice becoming "books", the listeners becoming "readers", and the people who run the project becoming "librarians".

Since the first event held in Japan in 2008, Human Library events have been held in various universities and regions. In 2017, the Human Library Society of Japan was established, and the society's current activities are not limited to holding events but also include conducting research.

(1) Design of the seminar

In my introductory seminar, we deepened our understanding in the first semester, discussing topics such as diversity, prejudice, and discrimination. In the second semester, we began planning and preparing for the Human Library event in earnest. Some of the classes in the second semester were held jointly with Professor Mike Nix's basic seminar, "Diversity and Equality in Japanese Society". The Human Library event was held jointly by first and second-year students.

The joint classes started off with a lecture for librarians by Tsuyoshi Tsuboi (chairman of the Human Library Society of Japan). We then formed mixed teams of first and second-year students, who were divided into groups and chose the categories of "books" that they wanted to hear about. After receiving permission from the "books",[2] the students contacted them directly, and in order to become the "librarians" who understand the "books" best, they coordinated the content of the conversations, acted as support, and provided assistance during preparation and in the actual event.

In addition, the event was managed by the students, who were divided into teams that handled logistical tasks such as clerical work and public relations. They created the flyers below and the website for registering, and ran the event on the day as hosts of the Zoom meeting.

After the event, the first-year students in the introductory seminar examined documents and gave presentations based on the insights they had gained from the conversations they had with the "books", with the aim of deepening their understanding of the topics.

This is an overview of the Online Human Library event held this year.
(For details about the event, see this website.) 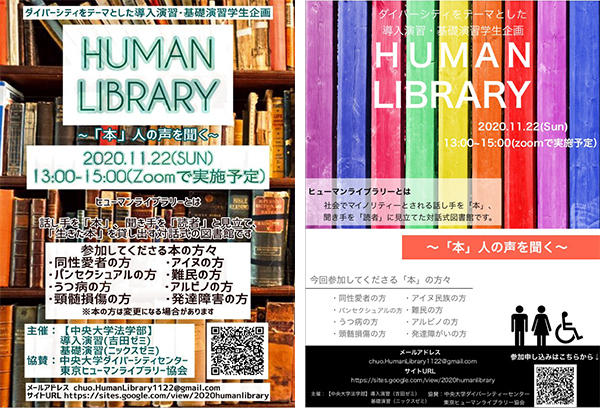 Each dialogue session lasted about 30 minutes, and was conducted in small groups of about two to four students playing the role of "librarians", and two or three "readers" for each "book".

4. Results of the Human Library exercise

In this section, I'll focus on what the first-year students in my introductory seminar learned based on the review sheets filled out by the "librarians" after the event. On the day of the event, in addition to providing support, as "librarians", for the "books" they were assigned to, they also participated in the dialogue sessions with non-assigned "books". Since they were also involved in managing the event, they were able to learn not only through the dialogues, but also by being involved in the management.

(1) Learning through the dialogues

The most frequently mentioned lesson that students learned through the dialogues was about reducing prejudice. This included understanding the "books" better; realizing their own ignorance, preconceptions, and narrow-mindedness; the importance of putting themselves in the position of the people involved and the value of understanding them; and the importance of dialogue. In addition to understanding and awareness, there were also several mentions of how engaging in dialogue with themselves changed their view of people and society, and reduced stereotypes and prejudices. The following comment is one example.

"What I learned by being involved in managing the HL (Human Library) was the importance of talking to people.....At the HL event, by looking at faces, seeing eye-to-eye, listening to real voices, questioning my thoughts and interests, and engaging in conversations, I noticed changes in my stereotyped views....."

There were also several mentions of how engaging in real dialogues with "books" helped students become more accepting of people who are different. The following is an example.

"....By conversing with the people at the event, I've come to realize that minorities, who I thought were somehow different, are actually very close to me, and that they're not different in any fundamental way."

In addition, some students mentioned that even though they had thought of themselves as the majority, they now realized that they are members of a diverse society. Others mentioned that they would like to consider what they can do to make society a place where everyone can live their lives in a welcoming environment.

(2) Learning through involvement in managing the event

As for learning through managing the event, students mentioned that they learned how to write proper emails, as well as realizing the importance of improving skills and self-confidence by taking on individual roles (such as creating flyers and hosting the event on the day), and of learning to take initiative, and cooperating with others. The following is one example.

"At first, I thought it was just part of the class, but after working with the other members of the seminar and seeing how each one of them played a role in the preparation of the event, I came to think that I wanted to be actively involved in this event and make it a success. Cooperating with others in a single activity has been a great experience. I think my ability to think on my own, as well as to cooperate with others, has improved."

5. The significance of incorporating the Human Library into the university classroom

This was the first time that I incorporated the Online Human Library as part of the introductory seminar for first-year students. Although there are some points that need to be improved, I realized that there is great significance in incorporating the Human Library in the classroom as an educational method for fostering diversity, even if it is online. This is because I noticed a significant change in the attitudes of students throughout the year from the first semester to the second semester. When they were learning about diversity in the first semester, the comment sheets after the class were mostly filled with statements such as "it would be good if more people understood diversity" and "social systems should be changed", indicating that they thought they were not part of the problem or the solution. However, after the Human Library event, many students saw diversity as a personal matter. This was largely due to the fact that their own awareness had been raised by conversing with various people, especially the "books", which changed the way they viewed and understood other people and society. It was also because they were proactively involved in creating their own Human Library while cooperating with various people.

In order to foster diversity, it is essential to have educational methods that allow students to learn from experience and through real dialogue, rather than passive lessons such as lectures. In addition, since meaningful contact with people who are different is not something that occurs naturally, it is necessary to intentionally create opportunities to nurture diversity in the classroom and other designed settings.

Moving forward, I would like to continue exploring and implementing educational methods for fostering diversity through trial and error, together with the students.

Finally, I would like to express my heartfelt gratitude to all those who participated in and cooperated on the Human Library event.

[1] Websites related to the Human Library: https://humanlibrary.org/, https://www.tokyo-humanlibrary.com/, and more.
[2] We were able to obtain support from the "books" who participated in this event through the cooperation of the Human Library Society of Tokyo, the Diversity Center, and a network of current and former students.

With her current main research focus on learning in multicultural environments, she is conducting research on international dormitories. (Tabunka no Manabi wo Hagukumu Konjugata Kokusai Gakusei Shukusha no Kenkyu (Study of mixed residents-type dormitories for fostering learning about diversity (co-authored), Jusoken Kenkyu Ronbun-shu: Jissen Kenkyu Hokoku-shu No.44 (Journal of the Housing Research Foundation "Jusoken" No.44), etc.)

Furthermore, in 2014, she launched "ICRIS Setagaya" as a place to hold workshops and conduct research with the aim of creating a multicultural community where parents and children with connections to foreign countries can raise their children in a safe and enjoyable environment.