Will Social Media Become the Voice of Public Opinion?

Social media is all over the news these days, with daily stories about the U.S. president's online feuds, or a young entertainer taking her own life because of slanderous comments made online. Over 10 years have passed since the emergence of social media, and its dominating presence is a demonstration of how it's become a vital part of society.

Social media is treated as a legitimate representation of public opinion, as if it were the fifth estate, following the mainstream media. Just some days ago when debating the pros and cons of the bill to extend the retirement age for prosecutors, a member of the Diet highlighted the fact that millions of critical opinions were being voiced on social media. The mainstream media, celebrities and other prominent figures also spoke out on this matter, and perhaps because of the outcry the government decided to scrap the bill. Judging by the result, there's no doubt that the voices on social media played a role in this.

However, not everyone is convinced of this. The skeptics claim that the millions of comments are an overrepresentation of a vocal minority. It's true that it's easy to manipulate the numbers on social media, considering how easy it is to increase the number of posts by copying and retweeting. The skeptics also believe that while the vocal minority relentlessly push their claims, the great majority of people, who are the silent majority, aren't being adequately represented.

These debates can continue endlessly depending on how you look at it. If you listen to the skeptics and accept that half of five million posts are somehow invalid, 2.5 million is still a significant number. Other questions remain, such as how to deal with the problem of individuals with multiple accounts, and the fact that we should already have statistical models for this kind of communication, and that such models should be applied and thoroughly discussed. Considering all of this, even if you subtract the margin of error to correct the exaggerated figures, it's difficult to completely deny the impact of social media.

It's important to note that each mainstream media outlet has its own stance, and its reports aren't always made from a neutral perspective (Ogiue, 2017). So, do social media sites, which are collections of opinions expressed by individuals, accurately reflect public opinion? Is the will of the people correctly represented in this world? Or is this form of media dominated by vocal minorities?

Using Twitter--one of the most well-known social media site--as the subject, we built a system that visualizes trends. This system has been in operation since January 1, 2019. As a result of monitoring for nearly a year and a half, we were able to detect certain overarching trends (Iio, 2019). In this article, I want to introduce the overview of these trends and attempt to answer the aforementioned questions.

Twitter has a feature called trend. It lists the keywords and phrases that are the most talked about at any given moment. Although the criteria for selecting keywords aren't disclosed, this is a very interesting feature that provides a glimpse into what is gathering people's attention at the moment. TWtrends which is the system we built collects this data every 20 minutes and analyzes it. TWtrends has two main features: collecting tweets related to a trend and visualizing the result, and analyzing the relevance of each trend collected on a day to compile related trends. Here, I'll explain the latter in detail. 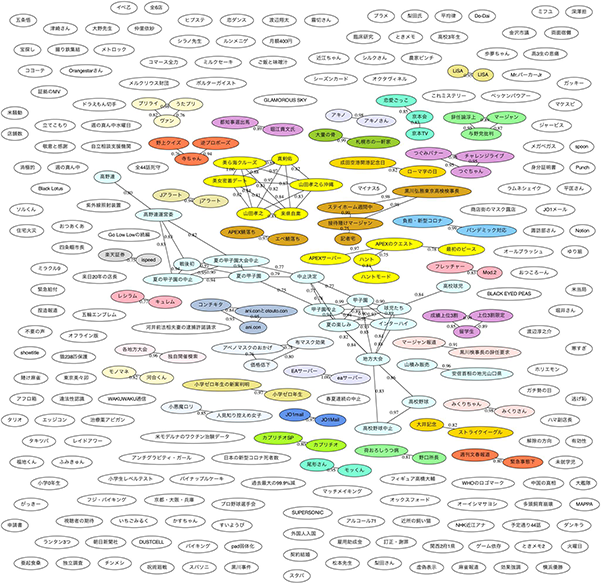 Figure 1 summarizes the trends collected on May 20, 2020, by relevant topics (note that the colorful parts of the figure are only to distinguish the topic clusters, and the color distinction does not have any meaning). In the center, a comparatively large cluster has formed. The light blue clusters indicate trends that are related to the cancellation of the Japan National High School Baseball Tournament in the summer. On this day, the Japan High School Baseball Federation announced that it would cancel the National High School Baseball Tournament for the summer season of 2020. The cluster shows the results of the many relevant tweets that were posted after the news came out. Other major topics include well-known actors taking vacations in Okinawa during the period when everyone was asked to stay at home, and the news about the scandal surrounding the former prosecutor-general.

With TWtrends, you can see at a glance that once a major story breaks, the conversations surrounding it can naturally grow in scale on Twitter. A good example is shown in last year's record for the week including April 30 and May 1 (Figure 2). 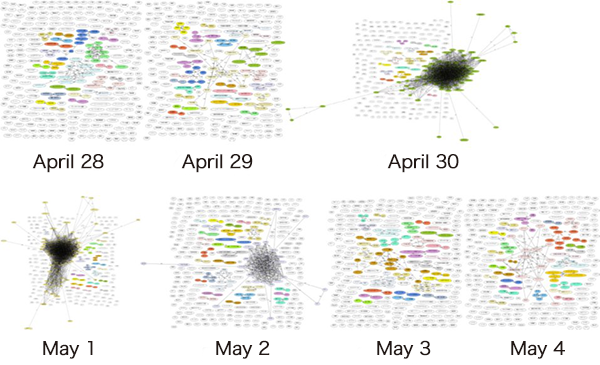 This doesn't need to be explained to the typical Japanese readers. What happened on April 30, 2019, and on the following day, May 1, is the moment that the Heisei era ended, and the Reiwa era began. On April 30, Twitter was flooded with topics about the "last XX of the Heisei era," and on the following day, there were many posts about the "first XX of the Reiwa era." As a result, we saw an enormous cluster, appearing as a large black mass on the topic map.

The Movement of Trends and Dealing with Social Media

Observing the visualized results of the trends produced by TWtrends, we can see that Twitter trends do a good job of reflecting the state of society. However, observing them every day for an extended period of time has also revealed that there is a significant deviation.

One example is shown in Figure 2, the May 2 topic map. At first glance, it seems like it's a continuation of the "first XX of the Reiwa era" trend, but closer examination reveals that the cluster of topics relates to a featured program on NHK FM called "Kyo wa Ichinichi Gundam Zanmai" (Today is an All-About Gundam Day). Furthermore, the clusters that always appear during weekend are topics related to horse racing. On Sundays, the television programs aired on Sunday mornings regularly form large clusters. Many other TV programs often appear in trends, such as Friday night movies and certain information variety shows, showing that mainstream media and online media are inseparable.

Topics related to IT, anime and games also often form large clusters. While clusters of topics related to current events and social issues emerge, less publicized topics can also create large clusters. This shows that major matters of concern to society aren't always aligned with trends on Twitter. Therefore, when asked whether Twitter is a complete representation of public opinion, the answer is no. However, it does reflect the major concerns of society to the extent that it can't be ignored. It can't be trusted completely, but it also can't be ignored. This may be a commonplace conclusion, but in terms of Social Network Services, it would be beneficial to understand how the medium works and learn to be flexible in dealing with it.

Jun Iio was born in 1970 in Gifu Prefecture and grew up in Nagano.
He completed the master's course at the Department of Mathematical Engineering and Information Physics, School of Engineering, the University of Tokyo in 1994.
He joined Mitsubishi Research Institute the same year. After serving as executive chief engineer in the company, he became an associate professor at the Department of Literature, Chuo University in 2013.
In 2014, he became a professor in the Department of Literature. He assumed his current post in 2019.
Since 2009, he has also held the role of guest associate professor at the International Center, Tokyo University of Agriculture and Technology.
He is a director of the Human Centered Design Organization.
He is a Ph.D. in engineering, P.E.Jp (information engineering), and Certified Human Centered Design Professional.
He has a strong interest in interactions between humans and systems and the way humans interact with IT.