Reflecting on the Chuo Anti-Harassment Awareness and Diversity Week 2019

Chuo University held the second annual Chuo Anti-Harassment Awareness and Diversity Week (hereafter the Diversity Week) from December 6th to 14th, 2019, at the Tama and Korakuen Campuses. Over the nine-day period, there were film screenings, various lectures, workshops and exhibitions that covered the three central areas of diversity we have been working on: disabilities, gender/sexual diversity, and global/cultural diversity. (See here for details of the events.)

This article will give an outline of the wide-ranging events during the week, and also introduce the support from the students who were involved in organising many of the events. Through this reflection, I hope to share the vision of Chuo University as a place that is becoming more open and inclusive to diversity, where students and staff members work together for a shared goal.

During the nine days, a total of six lectures, two workshops, and two film screenings took place at our two campuses. The central theme of this year was disability, and the lectures by two prominent scholars on Disability Studies, namely Jun Ishikawa and Harumi Kimura, were given at the Tama Campus as highlights of the Diversity Week. These fascinating lectures introduced latest discussions about the rights of disabled people, in both international and domestic contexts, inviting the audience to review and rethink their understanding of disability. There was also a mini-lecture on crime prevention at the Tama campus which reminded us of the importance of physical safety on campus.

At the Korakuen Campus, another inspiring lecture titled "Disabilities and Technology" was given by Takaya Aono, a 4th year student at the Faculty of Letters who is also a para-athlete, under the coordination of Shunji Moromugi, associate professor at the Faculty of Science and Engineering.

The film screenings were organised through cooperation between Miwa Ota, professor at the Faculty of Letters, and her students. The films shown were Entoko no Uta (Songs of Entoko) and Keiko Fukuda: Joshi Judo no Pioneer (Mrs. Judo: Be Strong, Be Gentle, Be Beautiful).

In the Chuo University Library, there was an exhibition of a collection of 130 relevant books in the second floor Exhibition Space, as well as a small display of the anti-harassment campaign posters in the first floor Exhibition hall. The co-op bookstore also held a special book fair. Many students and faculty members stopped by at these exhibits and browsed interesting books and journals. 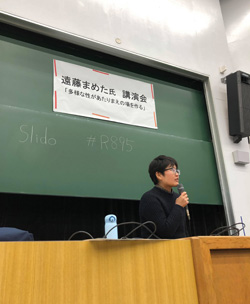 An important new element in this year's Diversity Week was the collaboration between students and faculty members.

First of all, the aforementioned lecture by Aono was made possible because there had already been a research collaboration between him and Moromugi. The post-lecture question-and-answer session was facilitated by Moromugi, where undergraduate and graduate students researching rehabilitation engineering discussed actively with Aono. This event served as a bridge-building opportunity between different academic disciplines, between people with and without disabilities, and between students and researchers.

There was also a group of students with keen interests in issues related to gender/sexuality, who got involved in several events during the week. Their involvement started when Sayaka Takano, an associate professor in the Faculty of Policy Studies, invited them to co-organize the lecture and workshop by the transgender activist Mameta Endo.

After many meetings and discussions in preparation for this event, they were all excited to listen to Endo's excellent introductory lecture on gender/sexual diversity in education. In the student-led workshop after the lecture, participants were divided into small groups and had lively discussions about gender/sexual diversity in their everyday life on and off campus.Their candid, experience-based opinions provided significant input that would not have surfaced in a faculty-led project. The workshop was closed with the constructive feedback by Endo. We all felt that the lecture and workshop helped further motivate students, as invaluable members of Chuo University, to make their voices heard.

At the following weekend, the final lecture of our 2019 LGBT Lecture Series, "LGBT and Children/Youth", took place in the Korakuen Campus to conclude the Diversity Week 2019. The same group of students helped organising the event--some of them as volunteers and others as enthusiastic audience. Then, on Monday, December 16, right after the end of the week, there was the screening of the film Kalanchoe no Hana, a film about "outing" of a lesbian student at high school, where we welcomed students and a teacher of the Chuo University High School. Again, one of our student volunteers offered their comment on the film based on their own experience, and thought-provoking exchanges took place among participants after the film ended.

4. Chu-Oji and the Veggie Menu 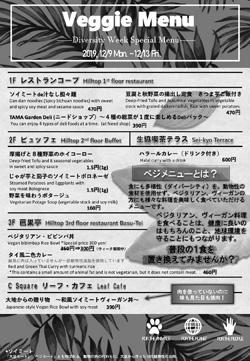 There were more events students contributed to this year. First, they invited Chuo University's mascot mouse, Chu-Oji, to hand out flyers with them for more effective publicity. Starting from the morning of the first day, Chu-Oji in rainbow colors helped students and faculty members hand out clear folders filled with information leaflets of the forthcoming events. Chu-Oji was very popular with high school students who were visiting the campus, and was busy getting pictures taken with them.

Another of the student-led projects was the special vegetarian and vegan menu at the university cafeterias. In order to draw wider attention of students and to increase sales, domestic and overseas students worked together and communicated with the management of cafeterias to make their vegetarian/vegan menu more attractive to students. They made visually appealing posters and flyers to show why vegetarian and vegan diets are the focus of attention today, and described the significance of plant-based diets in relation to environmental issues, with comments from overseas students to provide information about different countries. They also used SNS to spread their messages, leading to expanded overall sales from last year, and receiving valuable feedback about the menu and the effectiveness of advertisements.

5. Moving together toward the more diverse and inclusive Future 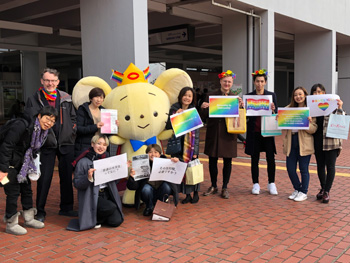 In total we had approximately 400 people attend the lectures, workshops and film screenings during the nine days. This does not include the number of people who visited the library exhibitions and/or tasted the special veggie menus in the cafeterias, so we can say that an even higher number of people participated in some way or other and had opportunities to think of diversity and inclusion on our campuses.

This is still only a fraction of the whole number of our students, faculty and staffs. Yet, I believe those who were there in those events will take their turn to create some new actions in their everyday lives from now on.

We concluded the Anti-Harassment Awareness and Diversity Week 2019 as bigger and more successful than last year, and it couldn't have been done without cooperation of wide-ranging members of Chuo University. Especially, as I stated above, it was only made possible by the students who offered their time and knowledge generously.

Chuo University will open the new Diversity Center in April 2020. This, I hope, will become a space where new interactions between students and staffs will occur on a daily basis--establishing new routes to deliver the voices of those who have been under-represented, so that we could move toward the even more diverse and inclusive future at Chuo.

Finally, I'd like to express my sincere gratitude to the following students who made this year's events possible: Momo Ishigaki, Riho Ishizuka, Yoshikazu Kazamoto, Hinako Komamura, Minami Hisamatsu, and Kotomi Mase.

Saeko Nagashima is a professor at the Chuo University, Faculty of Law. She specialises in Literature, Feminism, and Gender and sexuality studies. She has been working with students, researchers, and activists inside and outside the university to create a campus that is open and inclusive in gender/sexual diversity. Her publications include Ai no Giho: Queer Reading to wa Nanika (The Art of Love: Introduction to Queer Reading) and Yomukoto no Queer: Zoku, Ai no Giho (Reading Queer: The Art of Love, Continued.)