Desire to conduct research and development to enrich people's lives 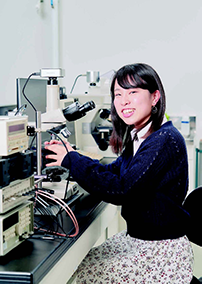 Ikumi Suka (1st-year master's student) is studying in the Applied Chemistry Course in the Chuo University Graduate School of Science and Engineering. She belongs to the laboratory of Professor Tomiki Ikeda in the Center for Research and Development Initiatives, Chuo University. In February, Suka appeared on the TBS television program "Mirai no Kigen: Wakaki Kenkyusha-tachi no Chosen (Origin of the Future: Challenges of Young Researchers)," which introduces research that serves as a model for advanced science. On the program, Suka was featured for her unwavering commitment and daily work pertaining to research on photo-kinetic materials.

The program was broadcast on February 9. Shortly afterwards, I visited Korakuen Campus to interview Suka. "My research focuses on polymer materials such as plastics and fibers that are abundant in everyday life," she explained. "Moving forward, I want to continue working on research and development which will enrich people's lives."

"I conduct research on plastics which move when exposed to light. These plastics can be controlled as desired through light alone."
--Suka began her explanation with these words when appearing on Mirai no Kigen, at the time as a senior in the Faculty of Science and Engineering. Next, the program showed a gold-colored plastic which changed shape when exposed to ultraviolet light, and then returned to its original shape when exposed only to visible light.

Plastic which moves when exposed to light

Envision an object which can be moved as desired simply through exposure to light.

There is no need to supply energy such as heat or electricity. Such a material will be so useful. The Ikeda laboratory is now developing just such materials. Called photomobile polymer materials, they are made from the plastics which surround us in daily life. Irradiating these materials with light causes them to undergo complicated movements such as expansion, contraction, bending, and spiraling. These plastic materials are composed of molecules called azobenzene (a type of dye) which react to light, as well as liquid crystal molecules.

Now, let's return to Mirai no Kigen. A narrator gives the following explanation:
"Suka has devised a liquid crystal molecule that combines with azobenzene to enable instant reaction to ultraviolet light. This technology is expected to be useful for the development of soft robots because it can perform movements which are difficult when using metal."

Professor Ikeda is the leading researcher of this photomobile polymer materials. His laboratory was the first in the world to discover the material and then created a light-driven plastic motor. In the future, his laboratory expects to realize practical application of such material to light-driven soft robot arms, artificial muscles, etc. Unlike metal, plastic is lightweight, so if it can be moved freely by simply shining light on, there will be a wide range of possibilities for flexible movement as well as remote operation through external stimulation of light.

"I want you to devise new liquid crystal molecules combined with azobenzenes and creat materials than ever before."--Upon entering the Ikeda Laboratory in April of last year, Suka was assigned this research theme by Professor Ikeda. Suka engaged in repeated trial-and-error in regards to liquid crystal molecules, while using highly specialized laboratory equipment such as a polarizing optical microscopy and light irradiation devices.

The core (nucleus) of liquid crystal molecules has structures called double-bond "aromatic rings" and single-bond "cyclohexane rings". Thus far, the combination of azobenzene and aromatic rings has been the mainstream; however, in order to advance the research one step further, Suka tried using cyclohexane rings.

Suka focused on several characteristics of cyclohexane rings, which enable complicated movements similar to aromatic rings. Suka found that similarly to aromatic rings, cyclohexane rings also enable complicated movements when combined with azobenzene, and further, plastics that could only move at high temperatures can now be moved flexibly through this combination. Now that such movement could be possible even in low temperature conditions like refrigerators. Once these materials are adopted for practical use, the range of applications will expand even further, including development of robots that can move in a zero-gravity space.

"I even report my failures in great detail." 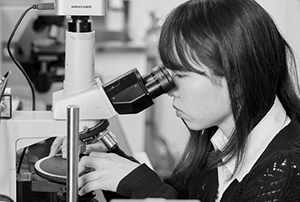 When entering her senior year in the Faculty of Science and Engineering, Suka decided to join the Ikeda Laboratory after seeing a video on the laboratory. Needless to say, the video introduced research on photomobile polymer materials, and Suka immediately got interested in the idea of plastics which move when exposed to light. Also, she had a different impression from the lectures on macromolecule which she had attended before; specifically, the video depicted a playful atmosphere created by Professor Ikeda and fun mood at the laboratory.

When she gets stuck in her research, Suka can depend on the advice and help of Professor Ikeda, Associate Professor Toru Ube, and her seniors in the laboratory. Furthermore, during the weekly report among the members, discussions are held regarding the research activities which were performed over the past week.

What does Suka do during weeks when research has not proceeded as expected and there is nothing to report? "We don't just report on our successes, but also on our failures. It is also important to report on failures and the next step we plan to take." explained Suka.

The attitude of valuing not only success but also failure will undoubtedly open up new possibilities for research. According to Suka, listening to reports from other members is a stimulus which helps develop new approaches and ideas for her own research, thus providing invaluable hints.

In the final scene of Mirai no Kigen, the narrator asks Suka about the driving force behind her research.
"I am inspired by colleagues who began research at the same time as myself" said Suka. "They keep me motivated when difficulties or setbacks make me feel like quitting. There is also a healthy sense of competition in which I don't want to lose." 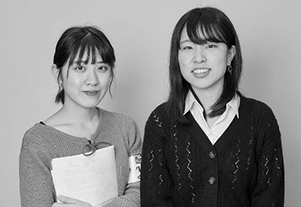 "I grew a lot after just one year at Ikeda Laboratory," reflected Suka. This spring, she entered Chuo University Graduate School and now spends fulfilling days engrossed in her research. "As a researcher and as a person, I want to absorb many new things and achieve personal growth which will enable me to play an active role in society," she says when explaining her vision for the future. 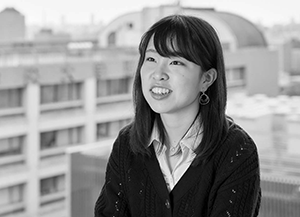 "As a researcher and as a person, I want to absorb many new things and achieve personal growth," says Suka.

Happily explaining her research with an unforgettable smile

Suka graduated from Chiba Municipal Chiba High School, and in March, she graduated from the Chuo University Faculty of Science and Engineering (Department of Applied Chemistry), and then entered the Chuo University Graduate School of Science and Engineering. On the TBS television program "Mirai no Kigen: Wakaki Kenkyusha-tachi no Chosen (Origin of the Future: Challenges of Young Researchers)," she gave a cool and intellectual impression. Readers of this article are sure to have gained the impression of Suka as an intelligent woman who is devoted to her research. While this is certainly true, Suka smiled throughout the interview and showed great enthusiasm when discussing her research.

Although Suka was not worried about being nervous while appearing on television, her family and laboratory colleagues pointed out that her expression was much more tense than usual. During our interview, Suka admitted that she wished she had smiled more on the television program.

Suka loves sports and her whole family are fans of the Yomiuri Giants.Sometimes, she enjoys watching the Giants play at Tokyo Dome, which is located next to the Korakuen Campus. In elementary and junior high school, she swam competitively in local competitions. In high school, she was a member of the tennis club (hard ball).

Why does plastic move?
Introducing the mechanism of shape change 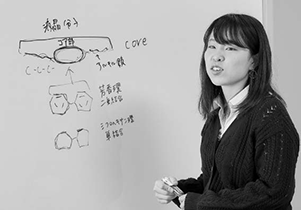 One property of azobenzenes is that when exposed to UV light, the molecules that normally line up in a certain direction change into bent structure. Then, when exposed to visible light, it returns to its original shape. Photoisomerization is the name of the property in which changes occur when irradiated with light.

On the other hand, liquid crystal molecules have the property of cooperative phenomenon which spreads the movement of molecules throughout the entire material. Imagine dominoes which fall over one after another. When a certain stimulus causes a change in the properties of one molecule that constitutes a substance, this domino effect causes changes to the properties of the entire molecule. This is a cooperative phenomenon.

To find out more about Suka as a researcher, I talked with Professor Tomiki Ikeda, who supervises Suka. "She has the great attitude of trying anything and everything," praised Professor Ikeda. "This makes her a great scientist. No one ever discovered anything new by following what is written in textbooks. Instead, the spirit of trying new things is needed for the advance of science. I hope to cultivate more students like Suka."

I then asked Professor Ikeda to comment on Suka's appearance on television. "I thought she would be more nervous, but she kept her cool and explained herself clearly," he complimented. "I expect a great deal from Suka in the future. I hope that she will utilize her unique characteristics as a researcher to contribute to society through her creations."