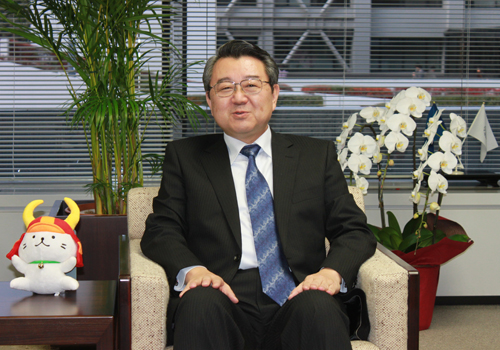 I would like to respectfully offer my New Year's greetings.

Last year, 2011, became a major turning point for Japanese society. The year 2011 began with heavy snowfall across the country. This was followed by the eruption of Mt. Shinmoedake in January. On March 11, the Great East Japan Earthquake struck and on the following day, March 12, the Northern Nagano Earthquake hit. In July, Niigata and Fukushima suffered heavy rains. Furthermore, there was damage caused by seven typhoons, including three that hit land. Japan truly witnessed a large number of natural disasters in 2011. Moreover, with the Fukushima Daiichi Nuclear Power Plant accident and the resulting power shortages, serious questions have continued to be raised about the nation and the future of Japanese society itself.

Chuo University was also directly affected by these events. However, more importantly, I think, is that essential questions were asked about the role Chuo should play as a top research and education institution. Chuo University, which was founded upon the spirit of "Fostering the ability to Apply Knowledge to Practice" and which has a university motto of "Knowledge into Action," was once again asked what it could do in terms of research, education and societal contributions.

Under these circumstances, on November 6, 2011, I was appointed Chancellor and President of Chuo University. Now, at the start of 2012, I believe this year will be significant for strengthening our cooperation with society.

While considering our existing links with society, we have made use of the phrase "All Chuo." This has the meaning of attempting to bring together all the efforts of everyone related to Chuo, including students and their parents, as well as alumni (graduates) and teaching and administrative staff. This is the starting point where this university will fulfill its social responsibility and, needless to say, this is our point of origin that we shall never forget. Nevertheless, I think that if we review the series of events that occurred last year, we are at a stage where we must consider the role of Chuo from an even wider perspective.

For example, Chuo has a great number of former students who studied as exchange students and collaborative partners and who are now living in Japan and throughout the world. When the earthquake struck last year, we received warm support and messages from these people. Furthermore, all those in NPOs that gave guidance to Chuo University volunteers in the disaster-hit areas are also important friends of ours. Among the parents of our students, there are many who continue to support this university, even after their sons and daughters have graduated. There are also elderly people who have received happiness from quality of life improvements created with technologies developed in our laboratories.

From an institutional point of view, these people may not be members of Chuo University. However, I feel that creating even larger networks that include these people is absolutely essential, not only for the future of Chuo University, but also for Japanese society. In our increasingly globalized society, I have a firm conviction that this hub in particular contributes to society through networks linking people and organizations, as well as through the improvements in education and research that result from these networks, and this is a key role demanded of universities and in particular of Chuo University. 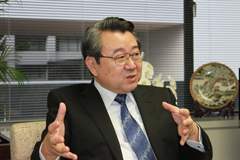 Now, one of the key measures of Chuo is internationalization, meaning we are becoming a hub of people beyond national borders, and our aim is to be nothing short of a gateway between Japan and the rest of the world. For example, at Chuo we have developed many international programs. These include the "Peace Seminar" of the International Center, the "International Water Environment Science and Technology Personnel Training Program" postgraduate course of the Graduate School of Science and Engineering, and the "International Summer Program: Introduction to Japanese Law in English" of Chuo Law School. Importantly, all of these programs showcase the unique expertise of Chuo, and our institution has become a place where young people who gather from many countries learn from each other in a variety of forms. Further development and deepening of these international programs and, moreover, assistance so that it is possible for people learning here to participate in an international network, is surely one of the key pillars of the internationalization of Chuo, heralding the development of an international village on our campuses.

Our university should not be an isolated place of research and education. It should be a hub where people and organizations meet together in an infinite number of combinations beyond the boundaries of specialties, age and national borders. We should be a gateway. Through linking people and organizations, new ideas will be born and necessary resources will be discovered. In these especially difficult times, I would like Chuo University to play this kind of role.

"All Chuo" is certainly the starting point to which we should always return. However, I do not believe that this is a limitation or a boundary. From "All Chuo" we should move toward "Beyond All Chuo." And from "All Japan" we should move toward "Beyond All Japan." With the start of 2012 upon us, I would like to offer my greetings and my hope that this year a great many people will join our networks of which Chuo is the hub.