Japan is an island nation. Historically, Japan has interacted and traded with East Asia and the world by sea. Today, 99.9% (weight base) of transnational logistics in Japan is dependent on maritime transport. Needless to say, there exists issues involving both private and public international law including territorial waters and exclusive economic zones. Moreover, the majority of environmental pollution and natural disasters involve the ocean. Human activities over and in the ocean are referred to as "maritime," and the legal domain related to this is called maritime law. The United Kingdom, France, the Netherlands and other major maritime nations have established research institutes for the comprehensive study of maritime law, policy, traffic and industry at major universities, and this is recognized as an academically and socially important area of research.

In Japan, however, maritime law is not fully recognized as an independent field of research because of the nation's unique historical development of maritime affairs and law. There are very few specialists in this field, and they are scattered around the country at different universities and institutions. Although there is a university of marine science, there were no departments or research centers devoted to maritime law. In order to appropriately deal with international maritime issues, it is vital for research and education to be in part with or better than Western nations. Being aware of the issue, the Institute of Maritime Law was established as a Project Research Institute at Waseda University in October 2007. The Institute will be celebrating its 10th anniversary, and we asked Professor Takashi Hakoi, of the Faculty of Law and the Director of the Institute about its endeavors.

Closing the Gaps of Maritime Law Research in Japan 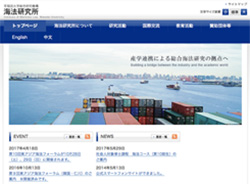 "The mission of the Institute of Maritime Law is to establish a research center for integrated maritime law that had not existed. To begin with, maritime law has a history of integrated development. Adding "integrated" is a double adjective, but the word was included for emphasis. In Japan, there is no history of integrated maritime law found in Western nations. Despite Japan being a nation involved in marine transportation, the importance of maritime law has not been fully recognized. Today, researchers studying maritime law are scattered into various fields such as commercial law, civil law, administrative law, penal law, international private law, etc., which makes integrating maritime law difficult. Led by the professors at Waseda University, the research institute was established with the mission of rallying researchers and practitioners to create a research center suitable for this maritime nation." (Professor Hakoi)

To understand the special circumstances of Japan, it is necessary to understand the history of maritime law. During the Middle Ages, when port cities developed in Europe, maritime law was formed as a method for maritime affairs and practices specific to each ocean area. After several hundred years of development, Louis XIV of France compiled the Great Ordinance of Marine, consisting of five volumes and 713 articles, for the first time in the world in 1681. This king's order targeted overall maritime affairs, including maritime courts, marine vessels, sailors, maritime agreements (charter contracts, maritime insurance, etc.), harbor administration, fisheries and other maritime-related issues. The Great Ordinance of Marine was utilized for more than 100 years and had a significant affect not only on European nations, but worldwide. This integration, which included both public and private laws, shows the original historical features of maritime law; however, the modern codification, which began during the 19th century in Europe, forced the dismantling of the old maritime law.

"Ten years have passed since we started as the first and only integrated maritime law research institute in Japan to fill in this gap. With research, international interaction and education as the three pillars of the institute, we have delivered results that have exceeded our initial expectations." (Professor Hakoi)

Maritime law in East Asia is based on treaties that originated in Western countries. However, interpretations and operations differ by region. Very little information is available, particularly on maritime law and application for China. Understanding the system has become a significant issue for specialists involved in maritime practice and policies in Japan. Since its establishment, the aim of the Institute of Maritime Law has been to exchange information among and carry out collaborative research with Japan, China and Korea. The first East Asia Maritime Law Forum was held in September 2008 at Waseda University. Thereafter, venues switched from China, Korea and then to Japan. In 2017, the 10th forum will be held.

"We debated adding the word, "First," to mark the first meeting because we weren't sure there'd be a next one. We invited specialists from China and Korea as guests, and they offered positive proposals. The second forum was held at Dalian Maritime University in China, and the third took place at Korea University in Korea. Since then, the three nations have been taking turns." (Professor Hakoi)

In addition, the first Japan-China Collaborative Research Meeting was held in March 2009. Thereafter, Waseda University and Dalian Maritime University held meetings, sometimes as often as twice per year. By 2017, fourteen meetings had been held in total. Chinese maritime universities in Dalian and Shanghai have law departments with affiliated specialists. Dalian Maritime University is a national university under the Ministry of Transport and its center for maritime research is considered the best in China.

"The interest China has shown is much higher than we had first expected. However, in 2011 when we scheduled the fourth forum, the Tohoku earthquake and tsunami took place. Due to the unfortunate natural disaster, many Chinese had left Japan for their home country. When we consulted with China to see if we should continue the plan of holding the fourth forum, they proposed that we continue with the plan and said that they would bring 20 people. We were so happy. We felt that we were building a strong relationship of trust with China." (Professor Hakoi)

Other events being held included the Study Meeting on Japan-China Maritime Merchant Law Theory with Peking University on the topic of academic theory. These international joint meeting results are shared among various fields through a large number of members from industry, government and academia at the Institute of Maritime Law as well as widely disseminated to practitioners of maritime affairs through trade papers in the Maritime Law Review (Japanese) published by The Japan Shipping Exchange, Inc. Seven groups have been organized, including Case Study Group, Vessel Collision Law Study Group, Vessel Financial Law Study Group and Maritime Insurance Law Group, and have become opportunities for interaction between research and practice.

"I was able to publish the results of the Vessel Collision Law Study Group in a book called "The Law of Maritime Collision (senpaku shototsu ho, Japanese)" in 2012. Filling in over half a century of blank space on ship collision and wide coverage of modern environmental damage, the research results obtained through the joint effort of researchers and practitioners were highly evaluated; and the book won the Sumita Shoichi Maritime Award given to works of outstanding maritime research." (Professor Hakoi)

Another important pillar of the Institute of Maritime Law is managing the Graduate School Master Course for Working Adults, which is the only course specializing in maritime law research in Japan. The "Practice and Law of International Maritime Affairs" program for working adults at the Graduate School of Law was proposed by the Institute of Maritime Law, and lectures are given mainly by members of the institute. The students in the course extend widely to individuals working in marine transport, insurance and trade companies, ship owners' associations, maritime affairs associations and other industrial organizations, lawyers and Self-Defense Force officers.

"Maritime law is formed in close relationship with practice. From the time of its establishment, the Institute of Maritime Law has provided theoretical education on maritime law for working adults as a part of its agenda and has moved forward with establishing the curriculum. In April 2009, the first set of students enrolled in the program. Research on maritime policy was established as one of the courses with the full cooperation from the Ministry of Land, Infrastructure, Transport and Tourism for dispatching lecturers. Thereafter, the course had consistent enrollment; and students for the 10th term in FY2018 will be accepted. There was even one student who moved onto the doctoral program and received a Ph.D." (Professor Hakoi)

The Japanese government is working on partially revising Maritime Commerce in the Commercial Code for the first time in approximately 120 years. Several members of the Institute of Maritime Law, including Professor Hakoi, are participating in the Legislative Council. The ministries and agencies linked to maritime law include the Ministry of Justice, the Ministry of Land, Infrastructure, Transport and Tourism, the Ministry of the Environment, the Ministry of Health, Labour and Welfare and the Ministry of Finance, which makes the overall picture difficult to see. It is a niche area, but it is clear that maritime law is important and that training of specialists who can play active roles on an international level is vital. The Institute of Maritime Law has had 10 years of activities as the only organization fulfilling this role in Japan. There are high expectations regarding how the institute will further develop going forward.