Since the 2000s, there have been strong calls for the importance of information technology (IT) for alleviating burden placed on the global environment known as green IT. Green IT has two facets: 1) reducing power consumption that arises from IT use, such as IT-processing, network devices, and surrounding facilities, and 2) utilizing IT in various fields to reduce power consumption.

However, the worldwide trend for IT to consume less energy cannot keep up with the reality of dramatic increases in energy consumption accompanying the explosive development of information society, including the Internet of Things, big data, smart grids and smart cities. The reduction in power consumption by processors, the "heart" of each computer which is essentially energy conservation in computing performance itself, is expected to offer the most significant effects in solving the aforementioned problems in a single stroke with green IT. Currently, this shift toward energy conservation with high efficiency in computing performance itself is becoming the core issue in competition for computers worldwide.

The Green Computer Systems Research Organization is working towards energy conservation with high efficiency using the highest performing power controlling technology in the world. Five years after its establishment in 2010 (see back issue article), we spoke to Professor Yuichi Matsushima (Center for Research Strategy), Director of the Green Computer Systems Research Organization, and Professor Hironori Kasahara (Faculty of Science and Engineering), Director of the Advanced Multicore Processor Research Institute, about the current situation and future prospects of the research organization, which entered the second development phase in 2016. 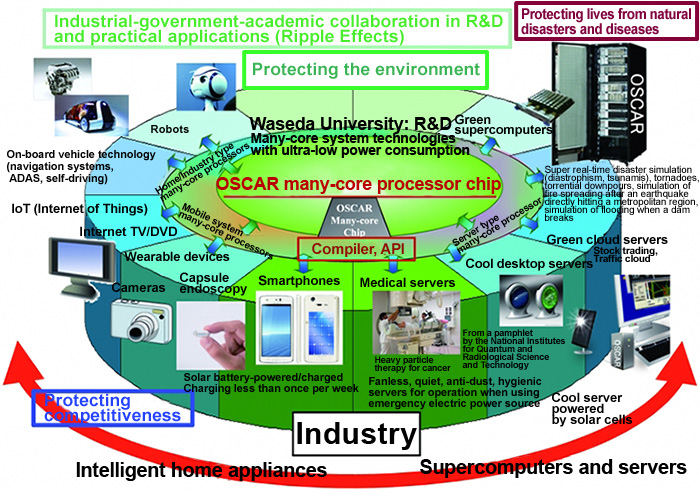 Figure 1. General Overview of Green Computing Systems Research Organization
With OSCAR manycore technology at its foundation, this organization consists of four laboratories—the Advanced Multicore Processor Research Institute,Perceptual Computing Group,Global Software Engineering Laboratory and the newly addedGlobal Robot Academia Laboratory. The objective of the second phase of the Research Organization is to expand the range of fields that use this technology by utilizing the synergy of these laboratories.

Over the five years of Phase 1, what troubled Professor Kasahara, who led the development project for the high-speed parallelized compiler OSCAR for multicore processors, and his team was comments of surprise and doubts expressing disbelief from people who had not directly seen the technical demonstrations themselves that such high performance or low energy consumption could be achieved according to the figures in development verification tests.

Professor Kasahara said, "Even recently, when I was invited as a representative of Japan to an international conference held to debate the future for increasingly high-speed and low energy consumption systems after the end of Moore's semiconductor law (the number of transistors on a semiconductor doubles every 1.5 to 2 years), which had driven computer development up to now, I reported on development results that nobody else in the world had previously achieved. A very prominent professor in the field of information gave a talk directly before I did. During his talk, he introduced the parallelization of vehicle engine control computing as a very difficult and important issue going forward. Then, in my talk, I reported that my team had already successfully achieved parallelization and had even applied this to actual problems in industries. In response, he gave comments like “This was unbelievable and there was no way this is true."

Professor Matsushima said, "World-class researchers like the ones mentioned who have a measure of pride can make verbal counterarguments such as this. However, many people simply appear to be very surprised by the outstandingly low energy consumption achieved by Professor Kasahara's ultra-high integrated multiprocessor. It still takes much effort to persuade people that this has actually been achieved."

The performance of this ultra-high integrated multiprocessor, which is surprising people around the world, is the result of overcoming countless obstacles in 30 years' of research by Professor Kasahara and his team. Five years ago, the objective of this research organization was cited as enhancing practicality through full-scale joint research with industries. As a result, the leading world position in next-generation green IT foundation technology was maintained, and steps were taken to engage in full-speed activities to build up undeniable competitiveness in Japanese industries. Previously, high-speed and low energy consumption were proven with custom made chips. However, in recent years, the performance of chips such as Intel and ARM etc. has finally improved, making it possible to demonstrate that this shift to high performance can also be achieved in general products (Figures 2, 3). Therefore, the times have finally caught up with the OSCAR Compiler.

Professor Kasahara said, "Although this is off topic, I was nominated to become the next presidential candidate in the 2016 elections of the Institute of Electrical and Electronics Engineers (IEEE) Computer Society (the biggest society in the IEEE, the world’s largest academic society) by previous presidents and vice presidents. They told me the person possessing the highest level of technology and experience of collaboration with industry in the world should be president. I would be happy to receive many votes from Japanese members (with a smile).” 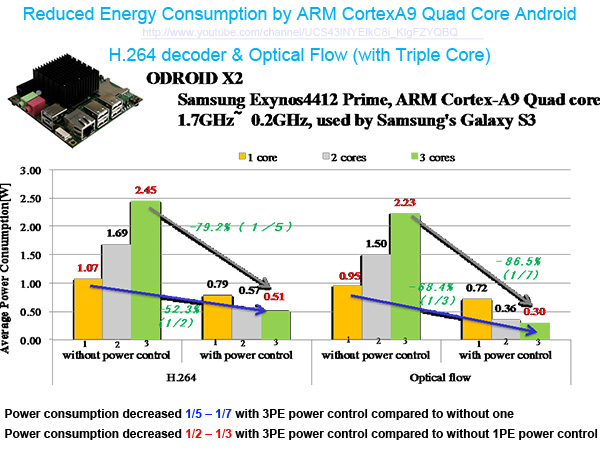 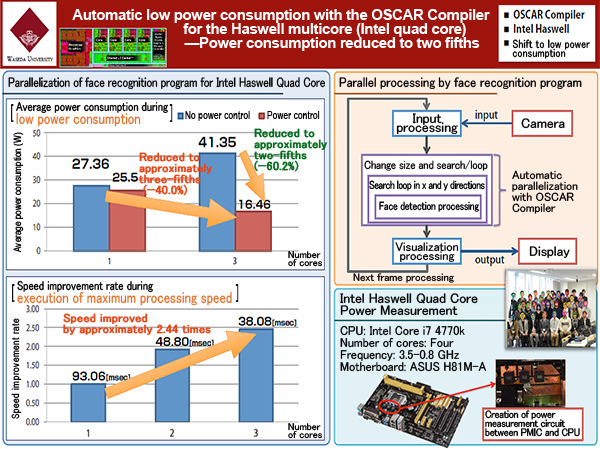 Research coordinated between industries and academia has implemented main target fields such as automobiles, medicine, and smartphones. In the automobile field, where the most effort has been made, joint research with major manufacturers has resulted in the progress of joint development of engine control processors, the heart of each automobile. Engine development has been regarded as highly confidential and closely guarded by automakers. However, an industrial-academic collaborative laboratory of a partner company has recently been established within the research organization building, which is quite close to the Waseda main campus. Therefore, due to the close coordination between industries and academia with frontline technicians, the development of products is scheduled to be mounted in 2020.

Professor Matsushima said, "In the beginning, we debated the possibilities of mounting our technology in next-generation engines for we wanted to get people to understand the high-caliber of the technology that we had. In addition, previous researchers manually parallelized engines for dual core, but this slowed down operations compared to using a single core. Therefore, we started by building a sense of cooperation and a trusting relationship between industries and our institution to work together in accelerating control computing. We first brought the OSCAR Compiler with us when we approached the business department of companies so that we could demonstrate Dual Core's 1.95 times high-speed performance when used for engine control program parallelization at those companies. As a result, our partner company decided to establish the development base in our university building so that they could reduce transportation time and increase efficiency."

Professor Kasahara said, "The aim was to achieve overwhelming fuel efficiency by becoming the first in the world to introduce multicore parallel processing technology to engine control. To convert current single-core controllers into dual core or quad core systems, parallelization of the conventional single-core program is necessary. Difficulties are what operations can be performed simultaneously, how work processes should be synchronized and how to guarantee the reliable operation not in laboratories but with on real automobiles, the product that hold peoples' lives in their hands. By working together with corporate technicians and actually performing parallelization of program with millions of lines, we established uniformity between speed improvement and previous computing results. Moreover, we performed repeated reliability evaluation experiments upon which we based decisions on product application." 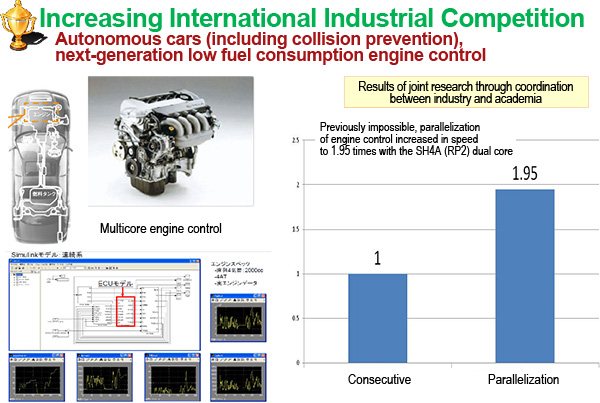 Figure 4. The future goals are to engage in various challenging issues such as automobile driving control processing and to contribute to improving the international industrial competitiveness of the automotive industry

The world's highest performance parallelization compiler technology was verified with automobile engine control, which is considered to be the most difficult challenge. This control technology that makes ultra-low fuel consumption possible has possibilities for application in various fields in the future such as medicine, transportation and aircrafts.

Professor Kasahara said, "In the field of medicine, for example, processors used in capsule endoscope require technological innovation on a surprising scale, computing performance speed increases by 100 times and energy consumption decreases to one one-hundredth. In effect, based on the image data of 30 to 60 of images taken within the body per second, the suspected lesion location needs to be rapidly discerned in real-time while the capsule remains in operation, controlled by a tiny button cell, as it passes through its entire course in over 7–8 hours. This means that only 1/1,000 of the power currently used in a general computer processor can be used. We are establishing challenging objectives and working to develop solutions in industry-academia collaboration with medical device manufacturers (See Figure 4)." 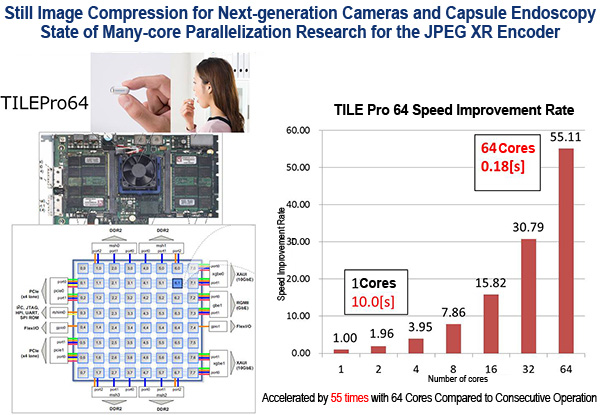 Overcoming the "valley of death" with ventures

As mentioned above, the major objective of the Green Computing Systems Research Organization is the regeneration of Japan's industrial competitiveness through green IT. However, when viewed on a global scale, there have been hardly any cases of coordination between industry and academia being successful enough to drive the industrial strength of the nation. To industrialize the seeds of cutting edge technology developed at a university, the "valley of death" between industry and academia, or the deep disparity between academic research and industrial application, needs to be overcome.

To actually overcome this "valley of death," the Oscar Technology Corporation, a university-born venture that specializes in developing technology for parallelized processing such as the OSCAR Compiler and implementing its technology in the industrial world, was established in February 2013. Professor Emeritus Katsuhiko Shirai, former president of Waseda University, Professor Emeritus Shuichi Matsuda, who has a wealth of experience in establishing venture businesses, Visiting Professor Takahiko Ono, who serves as the CEO, and Professor Kasahara founded the company. 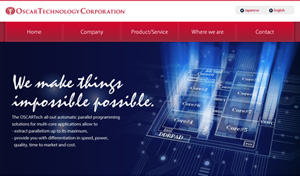 Professor Kasahara said, "Exclusive licenses for the patents related to parallelization technology at our laboratory and the OSCAR Compiler program have all been given to Oscar Technology Corporation through Waseda University. Regarding the licensing fees, the equivalent of a lump-sum fee has been paid to the university in shares and as running royalties that form a portion of annual sales. The "valley of death," which would have been difficult for Waseda University to prevail against alone, has been overcome together with Oscar Technology Corporation. We hope to industrialize the results of the academic research conducted over 30 years and utilize them for the future of Japan. By achieving successful coordination between industry and academia, we aim to encourage many researchers both within and outside of academia to further engage in industry-academia coordination. To realize this dream, we gathered over 20 renowned researchers from around the world, including veterans of the vector supercomputer research team at corporations in Japan to form software and hardware development teams. We plan to soon release a parallelization compiler for automobiles that will be a first for Oscar Technology Corporation."

Professor Matsushima said, "In the past Japanese corporations have lost out strategically to overseas corporations concerning semiconductors and smartphones. The automotive industry must at least remain an industry that supports Japan. Likewise, we need to outperform overseas competition in IoT and big data as well."

There are high expectations for the second phase of development of outstandingly superior technology in the Green Computing Systems Research Organization that the world finds “unbelievable” and its utilization on the center stage of various industrial fields.