Architecture for Children That Will Continue to Be Loved

Research and Proposals for Focusing on the Perspectives of Children 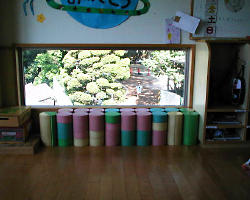 Image A: The "Windows Where You Can See Your Friends Come to School (center of picture)," situated on the second floor near the children's locker. Designed in 2002 in cooperation with Ochiai Sekkei Associates (chief architect: Satoru Kajiura).

After World War II, it became standard to design residential buildings that have separate rooms for eating and sleeping. This was considered a minimum requirement to ensure the sanitary conditions of homes (examples of this include Uzo Nishiyama's food and sleep separation theory in 1942, and Shigebumi Suzuki and others who formulated the standard design titled 51c in 1951). However, when I visited some of the preschool facilities that were built in the few years that followed, I found that the eating and sleeping spaces were still not separated to this day, with futon mattresses laid out right next to where children are eating. Even if these facilities have the social responsibility to increase their capacity, considering the children's perspective, it is crucial to safeguard the space of each and every child, as well as to build a system that protects basic levels of sanitation. The fact that standards of living established over 70 years ago are still not being met in childcare facilities to this day is shameful.

Since 1998 when I started my post-graduate research in architectural planning, I have kept in mind the things that I mentioned above (such as considering architecture from the perspective of those whose voices are often not heard) when I did my research that looks at architecture from the viewpoint of children's behaviors and psychology. For example, I have seen many kids lying down around their lockers as soon as they arrive in the childcare centers. Image A is a design that I proposed with this in mind. The windows are placed at the eye level of the children. In the nursery room on the second floor, the windows are placed only at the eye level of adults, which often prevents children from seeing the scenery outside. The proposal was meant to address this situation.

Suggestions of Designers Are Not Making the Users Happy

Besides what I have listed above, I have also gone on to propose designs for architecture, playground equipment and furniture. In addition, due to my background in architectonics, I used to frequently visit preschools that look fashionable, but only in terms of appearance. What I sensed when I visited them was that the ideas formulated by the designers after meeting with board members and nursery school principals did not make the children happy. Moreover, even preschool buildings that were featured in architectural magazines or had won architectural prizes were sometimes deeply resented by the end users. As a researcher, I feel strongly about the importance of architecture that delivers happiness, which cannot be conveyed through the pages of a magazine, as well as the need to create more buildings that are loved by everyone.

Previously, I thought that it was important to view it from an environmental psychology perspective, such as how a certain environment or design can influence a certain mentality or behavior in children--to provide an easy answer based loosely on environmental determinism. However, I began to think that it is more important is to consider the feelings of the nursery school teachers who share the space with the children, and deepen our understanding of the physical environments that teachers and guardians face. Based on that, I would propose designs that are for the well-being of the children, and can inspire a sense of attachment that permeates the physical environment. 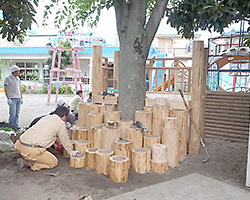 I was able to partially achieve this with a playground equipment designed to catch cicadas (see image B). The original request was to rebuild playground equipment that they had nicknamed Kingyo-chan (Little Goldfish), but after conducting an opinion-sharing workshop using sticky notes with the staff, including the bus driver, the teachers agreed that what they wanted to accomplish was to build playground equipment that can be used to catch cicadas. Among the many ideas proposed by graduate students, we picked a few and built models to further brainstorm, after which a few of the fathers volunteered to build the equipment. The fathers who participated were then able to see the equipment they built when they came by to pick up their children. It goes without saying that for the children, they would much rather play with something that their fathers built, than something built by university professors and designers.

Do Not Deceive with "Workshops" in Name Only

In the years that followed, I continued my research on the efforts of nursery school teachers to create their environment (Note 1), but I began having doubts about the methods by which the teachers, as the actual users, formulate ideas for creating their environments. In recent years, you can call anything a "workshop," and it will sound like the people who were there did the work and were involved in the design surrounding the specifics of the physical environment. By calling something a "workshop," you can convey the nuance that it was not a simple lecture or a one-sided provision of information, but a mutual exchange of ideas. It is a fancy word that can convey the wrong meaning, and I think it is dangerous. It is true that by using sticky notes to elicit opinions and key words helps visualize certain psychological elements of the participants, but unless thoughts and concrete form (specific physical environments that can be seen with the eyes) come as a set, it is not possible to inspire a sense of attachment to physical environments. Workshops that follow the simple process of using sticky notes to organize vague images of ideas are merely empty theories, and they certainly do not lead to any real understanding of the perspective of the users in terms of their physical environments, nor do they inspire any sense of attachment. If it is a workshop only in name , it is better not to hold one at all. This method in which many vague elements are raised before the task is done only helps designers deceive users into thinking that their intentions were materialized in the design.

To Achieve an Architectural Design Process That Connects Thoughts with Forms

As an example of an architectural design process that presents specific physical environments, there is a process developed by Peter Hübner and his fellow German architects (Note 2). Their method is to use massive wooden models and clay to make actual models together with the teachers of the preschool facilities, the parents and the children. I utilized my sabbatical at Waseda University to stay in Germany to observe the modeling workshops that made use of actual clay, as well as the buildings that were built by the architects using this process. My goal is to advance that idea and focus on research and development in a way that would suit the Japanese culture. As shown in image C, I used three-dimensional clay models to allow participants to propose ideas in more specific ways. Because of this, the teachers were able to produce more proposals than in the previous method, where we used two-dimensional figures. For example, a wide variety of keywords and opinions were voiced while imagining the specific aspects of the lives and activities of children, such as when they arrive at the preschool. I am currently in the process of collecting the results of this research to accumulate qualitative data.

Furthermore, based on my background in environmental behavior studies, I am also conducting multiple research projects focusing on ways to utilize various spaces within cities (Note 3). My aim is to investigate how we can create "architecture for children" that is loved by all, including the people living around the preschool facilities who are directly and indirectly impacted by their presence.

Image C: Workshop held at the Komazume Nursery in Gifu in 2018, where discussions surrounding the arrangement of physical structures in the nursery school took place.

Born in Akita Prefecture in 1975, Masayuki Sato graduated from Akita High School and did his undergraduate studies at the Faculty of Engineering, Niigata University. He then went on to complete his doctoral degree in Architecture at the Graduate School of Engineering in the University of Tokyo. Before assuming his current position, he was a coordinator entrusted with building a space for children at the Edo-Tokyo Museum, among other positions.