▼Study Abroad - From WASEDA to the world -

From Waseda to Germany

"Studying in Germany has expanded my horizons infinitely."

I studied abroad for one year at the University of Bonn in Germany, starting in the autumn of my third year. I moved to the Waseda University International Dormitory (WID) to start my university life there, which, in fact, triggered my initial interest in different countries. Living together with international students from across the world increased my desire to go out and see the world for myself. As I have been playing soccer ever since I was in elementary school, have a keen interest in Europe, and started taking German classes in college, I decided to study abroad in Germany.

Believing that "experience is the best teacher," I left for Germany with what little German I had picked up--which was actually just barely more than greetings--and I had a hard time understanding classes there. I attended a language school in the first half of the year, and learned Japanese economics from a German point of view together with German university students in the second half. Although my German was almost non-existent at the beginning, it improved in a year to the extent that I was able to hitchhike all around Germany.

During my days in Germany, I proactively participated in local soccer team activities and had an internship in Dusseldorf, where a lot of Japanese companies have offices, in addition to my studies as a university student. The University of Bonn has a spacious grass field in front of it. Whenever I was kicking a ball on my own there, someone showed up out of nowhere and said to me, "Let's play together!" This often ended up with several tens of people, of different nationalities, age groups and sexes, forming teams and having matches. This is an aspect of Germany that intrigues me.

Anyone can study abroad as long as they have the courage to take the first step forward, even if they, like me, do not have good language skills at first. I hope that many Japanese students will take the plunge into an unknown world to expand their horizons infinitely, defying language barriers. 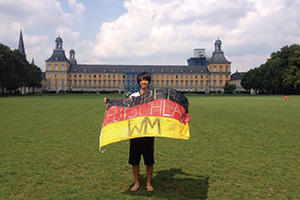 This is the grass field in front of the University of Bonn where many students relax and chat with friends on sunny days. I would often play soccer here. 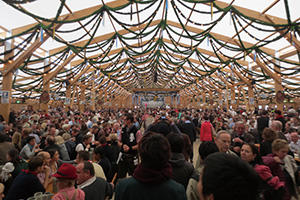