▼Study Abroad - From WASEDA to the world -

From Waseda to Russia

Mika Yanagisawa／5th year student at the School of Political Science and Economics
Jun 22, 2015

"What I felt from studying in the frigid land of Russia"

From autumn in my 3rd year at university, I went to study at Saint Petersburg State University in Russia for one year. While there, I mainly took lessons of languages, and studied with the aim to gain qualifications in languages.

Because my father is Russian and my mother is Japanese, I am often mistaken for a returnee, but I was born and raised in Japan and could not write or speak Russian. Also, my faculty studies are centered on Japanese politics. Even so, I thought, "I want to be able to speak Russian the same as I do Japanese," so I started studying the alphabet with the aim of studying overseas.

Saint Petersburg is a city with many historical shops and houses remaining, to the extent it is called the "Venice of the North." There are also many theatres for ballet etc., and you can watch world class performances. In the summer, days continue with a faint light late into the night from the midnight sun, and the winter was, as expected, extremely cold. However, it was a good experience that I have never had before.

Studying overseas has many enjoyable moments, but there were difficulties, and I cried at times. Even so, becoming lifelong friends with students from around the world is something I treasure. Also, there are many caring and kind Russian people, dispelling the image I had before going overseas of "unfriendly Russians".

For someone who has never been overseas, I think that studying overseas is an adventure, but at your destination, many things and impressions that can only be done "now" await. I definitely want you to experience things you can do "now". 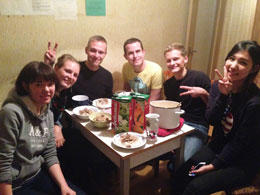 I made beef-over-rice-bowl dishes for my German friends. Japanese rice bowl dishes were popular with them. 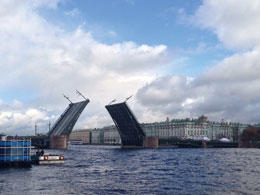 The bridge is raised in the middle of the night!?
Several large merchant ships enter port in the centre of the city via the Neva River which runs through the city. For that reason, when the ships come and go during the night, the Palace Bridge spanning the Neva River is raised.