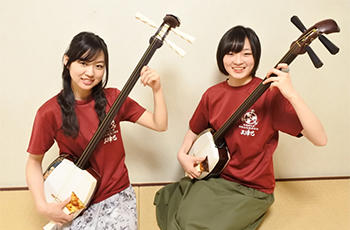 -How did you start playing the shamisen? 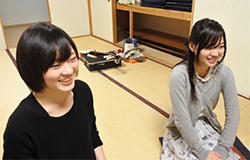 I am a little embarrassed to say this but the reason I became interested is because of Mitsudomoe's cool posters around campus. The posters were black and had Mitsudomoe's insignia with the caption "Waseda's traditional Japanese music circle, with a rock twist." I sat in at one of the circle's sessions and liked the atmosphere so I decided to join.

Both of us had never played the shamisen before but this was the same for most members which made it easier for us to get started.

-What is it that you like about the shamisen?

The shamisen is different from the guitar or other stringed instruments and has a very unusual sound. It is capable of producing traditional folk songs, rock songs in the vein of the Yoshida Brothers, as well as soothing ballads. It is an incredibly versatile traditional instrument.

As someone who played the piano until high school being able to bring the shamisen wherever I wanted was very appealing. Many people think the sound is too loud to practice at home but there is noise dampening equipment that allows you to practice at a lower volume. 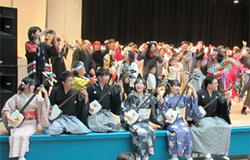 From the event held in late February in Taiwan 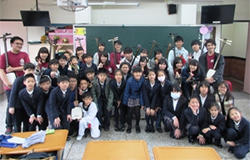 -People generally associate the shamisen with folk songs. Do you perform many folk songs?

When we are invited to perform at facilities for the elderly many members of the audience enjoy folk songs so we accommodate their tastes. However, at the Waseda Festival and other events where there are a lot of students we perform a lot of contemporary high-tempo rock songs. At last year's festival we collaborated with the circle "Don't call us Wasejo" and performed covers of Momoiro Clover Z songs.

-Have you collaborated with other circles besides "Don't call us Wasejo"? 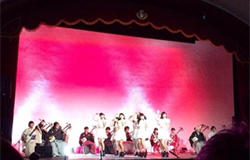 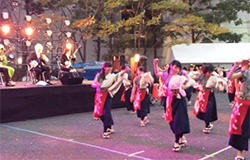 Collaborated with the dance circle "Getappers"

-What were some of the hurdles you faced at the National Tsugaru Shamisen/Tsugaru Folk Song Tournament?

This tournament is different than those for orchestras or other traditional ensembles. Although it is a "national" tournament there are actually no local or preliminary competitions. Eleven members of Mitsudomoe competed in the tournament and in preparation we practiced even on days when the circle does not usually meet. On those days we rented studios and other private facilities to carry out our own practice regiment. Generally we play the shamisen just to have fun but this was different for us competing in the tournament. Refusing to compromise, we recorded our practice sessions, corrected our mistakes, and did whatever it took to be ready for the tournament.

-It is very impressive that you won at your first tournament!

I am very happy that hours of hard practice paid off. Those that performed in the tournament were mostly third year students (now fourth year students). There were some students that are usually quiet who erupted in joy when we won. Now it is my year's turn to win at the tournament this fall and we intend to bring home another victory for the circle. 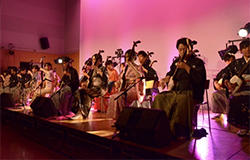 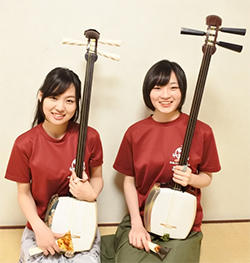 “Mitsudomoe” is a Japanese play on words and means “many types of people and many strings coming together.” In addition to weekly practice sessions every Friday, the circle performs at university events on the weekends, at facilities for the elderly and disabled, and at local festivals. Recently the group has also been invited by companies to perform at hotel banquets. “Tsugaru Shamisen Enthusiast Society Mitsudomoe” website: http://mitsudomoe.wix.com/mitsudome

Abe was born in Fukushima Prefecture where she attended and graduated from high school. Commenting on the increase in members since last year Abe happily says, “Especially during the welcoming period for new students the tatami room at Gakusei Kaikan becomes so crowded that it feels like a train during rush hour.”

Tomatsuri was born in Saitama Prefecture and attended and graduated from a high school in Tokorozawa. Her most memorable moment with Mitsudomoe was performing at the “Sayonara Memorial Hall” event last August. She says she discovered the joy of performing on stage when they performed under the spotlight in front of a tremendous crowd.