Pursuing excitement for over 30 years 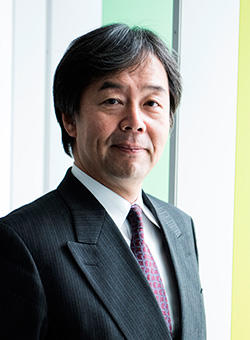 Professor Hironori Kasahara makes his second appearance in "People," and his first was in 1987 in issue No.3. Previous "People" articles on Professor Kasahara's introduced his research on making a humanoid robot arm move quickly be divvying up the work between multiple computers and winning Young Author Prize at one of the world's largest international conferences. Even now close to 30 years later, Professor Kasahara tells us, "I'm still aiming for the 'world's fastest.' I have unceasingly researched parallel processing while experiencing the thrill of overcoming the barriers which have stood in my way."

His efforts have borne fruit as his multi-core processor and parallelizing compiler, which uses the latest in multicore processing to automatically speed up software while at the same time reducing electricity consumption. This innovative technology, which achieves what even the world's major semiconductor manufacturers could not do and is the only one of its kind in the world, solves such problems as those concerning software development costs and conventional limits on increasing processor speed due to heat generation.

Professor Kasahara was also the first in the world to succeed at parallelizing automobile engine regulation. In addition, his parallelizing technology, which also has applications for medicine, cell phones, and the internet of things (IoT), will be commercialized this year. "Cooperation between industry and academia can be extremely difficult, but I wanted to succeed at making this technology applicable to the real world. Now we are just about to overcome that hurdle," says Processor Kasahara. Together with his students, the professor has continued to be excited by this effort for over 30 years. 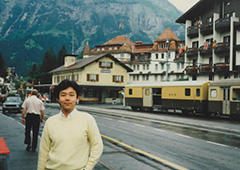 Professor Kasahara during his days as an associate professor

Professor Hironori Kasahara graduated from Waseda University Senior High School. He graduated from the School of Science and Engineering at Waseda in 1980 and completed his doctoral course here in 1985 (Doctor of Engineering). He became an associate professor in the School of Science and Engineering in 1986 and a professor in 1997. In 2009, he was elected as Board of Governors of IEEE Computer Society. In 2014, he was awarded the Minister of Education, Culture, Sports, Science and Technology Commendation for Science and Technology. The commercial version of Professor Kasahara's multi-core processor and parallelizing compiler will be made ready for general use by Oscar Technology Corporation, a university venture company established by former Waseda University President Katsuhiko Shirai.

Professor Kasahara during his days as an associate professor