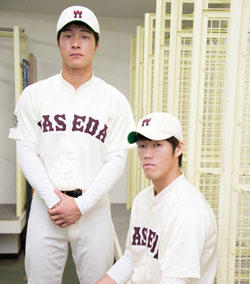 Players vow to play for the pros with the Giants and Golden Eagles.

Shin'nosuke Shigenobu, an outfielder who boasts the most stolen bases in the university Tokyo Big6 Baseball League, was accepted into the Yomiuri Giants as their second round draft pick. Infielder Eigoro Mogi is distinguished by his sharp swings and long hits and was selected by the Tohoku Rakuten Golden Eagles as their third-round draft pick.

"My grandfather is a Waseda alumnus, so I've loved the university since I was little," Shigenobu told us. According to Baseball Club Coach Hiroshi Takahashi, Shigenobu is expected to surpass base-stealing legend Tadashi Matsumoto (1977 School of Education graduate), called the "Blue Lightning" amongst the Giants, when he turns pro.

Meanwhile, Mogi, a fan favorite thanks to his habit of shouting "Bring it on!" at the batter's box, is making sports for disabled people the theme of his graduation thesis. Mogi became interested in the topic after reading a newspaper article about a boy worried about others taking it easy on him for his disability. "I would like to contribute to support for the disabled by working as part of my team and becoming well-known," says Mogi.

The two are friends and have been each other's partner in games of catch since their first year at Waseda. In their fourth year, they have achieved successive wins at the spring and autumn league championship and also won the All Japan University Baseball Championship Series, which determines the top university team in the country. Both vow to continue motivating each other in the pros and working hard at improving. 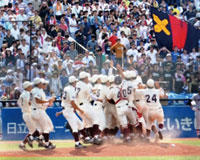 Shin’nosuke Shigenobu is originally from Chiba Prefecture and graduated from Waseda Jitsugyo High School. Impressed by seeing Jitsugyo win the Koshien tournament in his first year of junior high, Shigenobu decided to go there for high school himself. As part of the Big6 League Championship, he participated in a total 83 games with a .333 batting average, two home runs, 22 RBI, and 39 bases stolen. He was the leading hitter in the autumn semester of his fourth year.

Eigoro Mogi is originally from Tokyo and graduated from Toin Gakuen High School. Dazzled by the famed annual Waseda-Keio baseball game, he decided to enter Waseda University. As part of the Big6 League Championship, he participated in a total 79 games with a .307 batting average, 10 home runs, and 58 RBI. He was the leading hitter and batting king in the spring semester of his fourth year.