Number one Amateur band in the worldOverturning fixed ideas about music 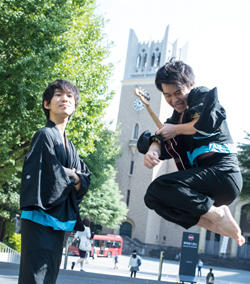 Shin Kimura and Yuya Goto represented Japan and took first place at EMERGENZA Music Festival - the world's largest amateur band contest with 34 countries and over 50 thousand bands participating and which was held in the summer of 2015 in Germany. Dressed in kimono, the duo drove the crowd wild with convention-defying dance music performed on a Hawaiian ukulele and human beatboxed drum and base sounds.

Kimura, raised in the American territory of Saipan up to high school, polished his ukulele skills by playing in local bars. Goto learned about beatboxing from a TV show in sixth grade and was enchanted by the style's musical sensibilities.

The pair met in the School of International Liberal Studies' SILS MUSIC CLUB and formed a band in April 2014. They travelled to New York in September of that year and performed live on the street; the response from the people who stopped and listened gave them confidence in their combo.

The duo entered EMERGENZA Music Festival in order to break down the fixed idea that the ukulele is only for Hawaiian music while at the same time showing the world the musicianship of beatboxing when handled by a master. Desiring to further popularize their unique style of music, the two are planning on touring Europe in June 2016.

Shin Kimura／Graduate of the School of International Liberal Studies, March 2015 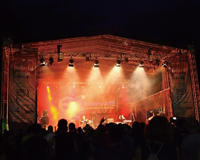 Raised in the American territory of Saipan. Kimura continues to pursue music while working at a company. He arranges the strings on his ukulele identical to that on a shamisen.

Originally from Tokyo, Goto graduated from Waseda University Senior High School. Performing both on and off campus, he also appeared in the “Sayonara Memorial Hall” event for the Memorial Hall, which is currently being rebuilt. The group’s European tour is part of their prize for winning at EMERGENZA Music Festival.