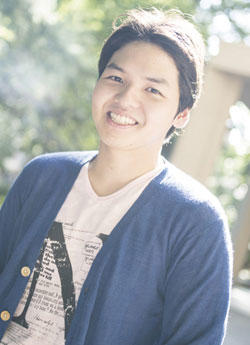 The ninth TOHO Cinemas Student Film Festival was planned and run by university students. In April of this year, Hiroki Kadowaki's film, Mirai ni tsunagu TOHO Cinemas Shinjuku ("TOHO Cinemas - Connected to the Future"), was selected for second place in the competition's commercial division from among 166 entries.

In Kadowaki's just over one minute film, the "mama" of an established Shinjuku Golden Gai restaurant reflects on the area's past while photos from the era are shown. Born and raised in Takadanobaba, Kadowaki was able to make his remarkable piece thanks to his family's relationship with the mama. "I hope I've been able to give shape to the love and hope I have for my home area," says Kadowaki.

Kadowaki became interested in film after delighting his homeroom teacher with a video message in high school. His first award-winning piece made from start to finish, Kadowaki had a member from his club, the Waseda Hoso Kenkyu-kai ("Broadcast Research Society"), perform the narration. Kadowaki says the award is thanks to all the people who worked with him, particularly the mama who appears in the film.

Kadowaki told us of his next goal: "What with things like forgetting microphones and at first getting rejected by the Shinjuku Historical Museum to use their photos, I really learned how naïve I was in terms of preparation and technical matters. On the other hand, I discovered how much fun it is to create a film that expresses the thoughts you want to convey. I want to continue polishing my skills and try creating another film.

Originally from Tokyo, Hiroki Kadowaki graduated from Waseda University Senior High School. He is a member of the movie group in the production division of the Waseda Hoso Kenkyu-kai student club. Kadowaki made his award-winning piece in just under a week. Kadowaki says he quickly came upon the idea of interviewing the mama who had been a friend of his journalist father for 30 years and who was the owner of Pony, a restaurant in Shinjuku Golden Gai, but the most difficult part was going to the Shinjuku Historical Museum countless times to negotiate in order to use their black and white photographs. Kadowaki’s film can be seen at the web address provided below: https://youtu.be/KBxPpgk2Jks