Yo Shitashima engages in research mainly on proteins at the Center for Advanced Biomedical Sciences (TWIns). In February of this year, he participated in the Edge Innovation Challenge Competition 2015, a business contest subsidized by MEXT, together with other graduate students to take the Gold Award.

"My advisor, Professor Toru Asahi, encouraged me to participate, and I had long wanted to use my research in a business, so I applied immediately," says Shitashima. The theme was "Towards better communication between working mothers and their children." That doesn't seem like a topic particularly suited to university students, but, Shitashima tells us, "I thought of it as an opportunity. Precisely because I had no experience working at a company or raising children, I could come up with ideas freely." Shitashima's group shared ideas bases in their respective areas of expertise, ultimately devising "OYAKonnect," an information service for expanding parent-child communication which sends working mothers a map of their child's interests and friends based on an analysis of what they say at nursery school. They were awarded the competition's top prize for their efforts.

"Now we're looking at making OYAKonnect a reality and preparing to start our own company. I'd like to gain a more flexible mindset from this experience and use that in my research." Shitashima is looking to work wholeheartedly both at launching his new company and in his research activities to achieve even greater heights. 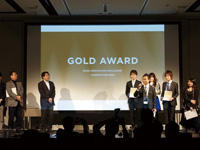 Originally from Hiroshima, Yo Shitashima graduated from Sugamo High School. A member of the "Energy Next" Program for Leading Graduate Schools (an integrated five year doctoral course with no separation between the master’s and doctoral courses), Shitashima entered the Edge Innovation Challenge Competition 2015 together with graduate students from the University of Tokyo and the Tokyo Institute of Technology he met in the program’s student council. He assembled the team and became its leader. Shitashima is now investigating matters such as the creation of an app together with the same members for OYAKonnect. His graduate school research theme is controlling protein function via light using LOV domains. He also enjoys exploring a diverse array of personal interests, including boxing and dessert making.