Waseda Flashes "V" for Victory after the Win against the U.S. in the Rugby World Cup!Waseda star's joyful first try contributes to 3 wins 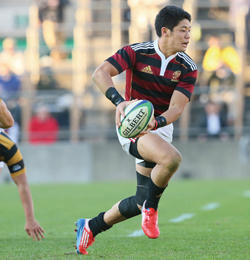 Japan went wild with the unexpected outcome of the match against South Africa in the Rugby World Cup 2015 (the World Cup) held in England.

He scored a try in his first match in the World Cup against the United States, contributing his share for the victory. He says he can still hear the roar in the stadium when he scored the try. Then he flashed the Waseda V sign over his head to express gratitude to Waseda University Rugby Football Club. "My college teammates surprised me with a video clip to cheer me on. When I wasn't able to play until the game against the U.S. team, the clip helped me overcome my disappointment."

As a star player, Yoshikazu Fujita has always been on the front line, but he experienced his share of disappointments when he wasn't able to play in some of the matches. This experience taught him to always give 100% and never give up. He says he came back to Japan a bigger man. "Since I had to attend so many practice sessions for the Japan National Rugby Union Team, I was unable to take part in the Waseda Team training and felt that I let my college teammates down. I want to win the Japan National University Rugby Championship in my final college rugby match and enjoy the best victory ever with my fellow teammates." Yoshikazu has the weapon of his world-class skills to aid him as his battle as a member of the Waseda Fifteen begins.

Born in Kyoto, Yoshikazu graduated from Higashi Fukuoka High School. He began playing rugby on a team coached by his father when he was in elementary school. His high school rugby team never lost a game, and he and his teammates played in the National High School Rugby Tournament all three years he was on the team. He holds the record as the youngest player to appear in matches as a member of the Japan National Union Team for both the rugby sevens and 15-person Rugby. In 2015, he was selected by the Barbarians Football Club that is based in Britain and includes the best players in the world. He was selected to play on the member of Japan National Rugby Sevens Union Team ahead of the Rio 2016 Olympics. He plays FB and WTB and doesn’t like tomatoes.