Won the NHK Student Robot Contest on their first try!Achieved the remarkable feat of reaching the quarterfinals at an international competition 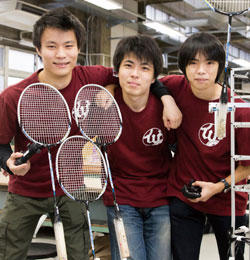 Shota Miyake had wanted to participate in the NHK Student Robot Contest ever since he was in elementary school. He invited Kensuke Hanajiri and Keisuke Shima to form the club ROBOSTEP in the fall of their freshman year at Waseda University. The three of them were very surprised to win the 2015 NHK Student Robot Contest, especially since it was the first time they had participated in this contest.

This year's contest involved teams competing in badminton doubles where each team pitted two robots against their opponent. Shota reflected, "The chassis of our trial robot was almost uncontrollable and the birdie went only 10 cm. Having not accumulated much technical knowledge, we struggled as we felt our way through the development process." Keisuke added, "After completing the body of the robots, we worked 21 hours a day, five days a week thinking how to optimize the program and improve the performance while practicing." About six months of trial and error bore results right before the contest was to take place--turning out a manually controlled, highly maneuverable robot that could run freely on the badminton court and accurately return the birdie.

ROBOSTEP competed against and beat one powerhouse school after another at the NHK Student Robot Contest in June and won the right to compete in the Asia-Pacific Robot Contest (ABU Robocon) in August. Although they advanced to the championship round, they came up short against contest winner Hung Yen University of Technology and Education from Vietnam and finished the contest having reached the quarterfinals. "I feel we still have a ways to go with the technology and our technical skills. I want to pass on the skills we learned to the younger students and make it back to ABU Robocon next year," Keisuke expressed. Their challenge of reaching craftsmanship of a global standard has just begun.

They carried out their activities at the Waseda Craft Workshop, where they created a robot with the help and advice from ROBOSTEP president Professor Shigeki Sugano and other workshop members. These three are aiming to pursue each of their interests. Shota said, "I will continue researching robots under Professor Sugano's tutelage." Kensuke added, "I want to conduct research related to hardware for robots," and Keisuke asserted, "I want to research semiconductors that can benefit to society."