A female karate athlete who conquered AmericaHere next goal: the world! 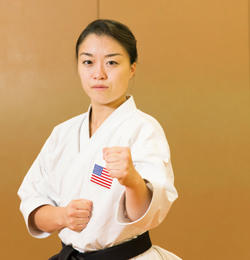 Karate competitions are divided into two events - "kumite," a one-on-one fight; and "kata," where an individual or group displays techniques. Sakura Kokumai, born in Hawaii with American citizenship and a member of the USA Karate National Team, specializes in kata. Possessing both speed and power, Kokumai handily won the Pan American Karate Championships held in May of this year. "I began doing karate when I was eight. After winning my first U.S. national championships at 14, I began competing in a variety of international competitions. In junior and senior high school, I was just happy to travel to foreign countries. That became my motivation for training," Kokumai tells us.

Kokumai smiled constantly throughout our interview, but once she begins a performance, her whole atmosphere changes, sharply dispatching her moves with terrific force. What supports her world-class abilities is simple, daily training. "It's always a fight with myself; I set a goal, train towards it, and I get results equal to the amount of effort I put in. I like that process."

There is a chance karate could be added to the list of events at the 2020 Olympics in Tokyo. Kokumai spoke passionately on the topic, stating, "It would be the first time ever achieving what is the dearest wish of the karate community. There's no way I wouldn't compete." Supported by both America and Japan, Kokumai will continue to compete with the goal of reaching the Olympics.

Originally from Hawaii, Sakura Kokumai graduated from Okayama Gakugeikan Senior High School and Doshisha University. She practices the Shito-ryu school of karate. In the kata category of the Pan American Karate Championships, Kokumai has won the junior division (under 18) four times in a row and finished first or second in the senior division (18 and over) five years running. In order to appear in the Karate World Championships in 2016, Kokumai is looking to win at the Pan American again. In graduate school, Kokumai studies culture and communication intertwined with karate. A member of the Waseda University Karate Club, Kokumai spends each weekday in club practice from 5 to 7 p.m. and independent practice from 7 to 9 p.m. Her hobbies include appreciating art such as movies, music, and the fine arts.