Respecting each other's differencesA movement aimed at a multicultural society

Manager of an English conversation school for cultural understanding 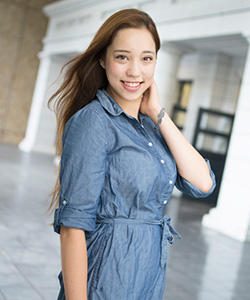 Naomi Iwazawa works as a representative for Culmony, an English conversation school for young children up to the lower grades of elementary school to learn cross-cultural understanding. Iwazawa's mother is Czech, while her father is Japanese; she was mostly raised in Japan up to the sixth year of elementary school. Despite her mixed-heritage appearance, Iwazawa was unable to speak English, which she was sometimes bullied for. She also felt resistance toward an elementary school education which strived to make her the same as every other student. Among other things, she later studied in Germany, and now speaks multiple foreign languages.

Based on these experiences, Iwazawa started Culmony, a combination of the words "culture" and "harmony." "Children implicitly believe they are capable of speaking English and are able to break down barriers to other cultures quickly. What they experience during their formative years is important," says Iwazawa. In addition to English speaking countries, a diverse array of international students from nations such as India, France, and Spain serve as teachers, instructing students not only on English conversation but also introducing cultures different from that of Japan, such as showing them Indian picture stories and trying on cultural outfits from other nations.

"What is important is not 'likes and dislikes' but rather recognizing our differences," Iwazawa emphasizes. Iwazawa will continue working to further expand her activities, stating, "I want to start a social movement where people can respect each other's differences and accept multicultural coexistence meekly."

Iwazawa (right) interacting with some of her children.

Iwazawa graduated from Senri International School of Kwansei Gakuin. After graduating elementary school, she spent 3 years at an international school in Germany, where she engaged in intense study of foreign languages. Iwazawa operates Culmony together with friends in the School of International Liberal Studies and has schools in Kugayama and Roppongi. She is also starting a one-on-one course called "Marukaru Academy" (based on the word "multicultural") for children up to the age of junior high school students. Iwazawa is currently accepting applications for members to participate in school operation (info@culmony.com).