"We are the champions!!Seeking an unprecedented 10 consecutive wins in men's and women's tennis 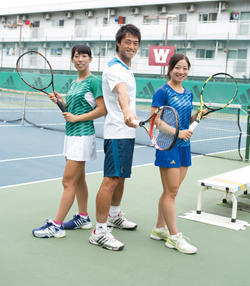 "We are the champions!" shouted men's captain Shintaro Imai after the Waseda University Tennis Team achieved its ninth consecutive win at the All-Japan Men's and Women's Collegiate Tennis Championships in 2014. Three members of the club in their last year at Waseda, selected to participate in the Universiade as well, spoke of their enthusiasm in anticipation of achieving their 10th consecutive win at the same championship to be held on October 22 (Thu.). Shintaro Imai: "The only way to conquer the pressure is to train daily. Strict training can be tough at times, but achieving victory after constant hard work is one of the joys of playing tennis. And increasing each other's abilities also improves the team as a whole." Women's captain Machika Miyaji: "Perhaps it's because the members selected to compete are basically the same as always, but I feel we might be getting a bit conservative. For me, this year's championships will be the last of my competitive career. I feel that if we can compete without becoming complacent with our successive wins and without anyone become passive, then the results will follow." Aiko Yoshitomi: "In class, I studied other sports. Over and over, I realized and was motivated by how hard people work, no matter what the game. I feel that I can work even harder still!"

All three vowed in unison: "We're gonna win!" They will be hitting the courts again today with their eyes on the end goal of all their efforts.

At the 28th Summer Universiade held in Korea in July of this year, Imai and Yoshitomi together took bronze in the doubles competition. Pictured is Imai, who collapsed to the court after a fierce battle to win last year's championships. After graduating, Imai and Yoshitomi intend to go pro, while Miyaji has secured a job in banking.