Presented a paper in a journal of “Nature” family

Jun Nagai／Completed of the Doctoral Program, Graduate School of Advanced Science and Engineering in September
Oct 19, 2015 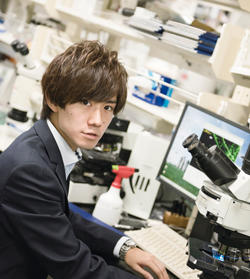 In February 2014, while he was a second-year student of the Doctoral Program, Jun Nagai discovered a protein that controls multiple factors that inhibit nerve regeneration after spinal cord injury. His paper was presented in "Scientific Reports," a scientific journal from the British publishers of "Nature." Since his paper had the potential to greatly contribute to the development of neuroregenerative medicine, he received a wave of inquiries from the media as well as requests to give lectures, and his achievement was reported in The Nikkei and other media.

As he grew up with a relative with a brain disorder, Nagai came to have a question: "Why does just a little change in neurological development cause such a big difference?" Although he originally intended to become a doctor, he became one of the very first students of the Department of Life Science and Medical Bioscience in the School of Advanced Science and Engineering, established in 2007, after graduating from Waseda Senior High School, with the aim of studying methods to radically cure neurological disorders.

He completed the Doctoral Program six months early in September 2015, and is going to work as a visiting researcher at the University of California, Los Angeles (UCLA), the United States, from next spring. In order to widen the scope of his research, he will take on innovative fields such as live cell imaging, in which living brain cells are observed. Fondly looking at junior students pursuing their research, he says: "In Waseda, my teachers and the senior students gave me lots of chances. If you have a can-do spirit, you can accomplish a big goal that you cannot accomplish alone." 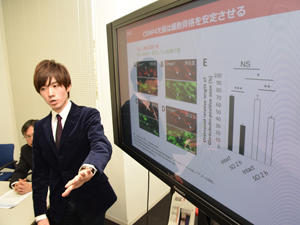 Jun Nagai／Completed of the Doctoral Program, Graduate School of Advanced Science and Engineering in September

Originally from Chiba prefecture, Nagai graduated from Waseda Senior High School. He is enrolled in the Department of Life Science and Medical Bioscience of the School of Advanced Science and Engineering and is affiliated with the Toshio Ohshima lab. In his undergraduate years, he served as the Secretary General of an official circle called the "Waseda Piano Society." He dreamed of becoming a pianist when he was little, and still performs even now. At an establishment run by his friend called the "Science Bar Incubator," where patrons can drink liquor from laboratory instruments, he gives fun and easy-to-understand science lectures through means such as comparing technical papers to characters from Star Wars movies.