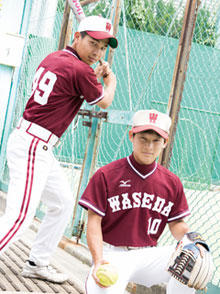 With three consecutive intercollege victories and a second place finish in the World Series U-23 in the 2014 school year, the Waseda University Softball Club has an impressive record. In 2015, Captain Satoshi Mizoguchi and Sub-Captain Shinpei Yamaguchi are looking to achieve the team's first ever fourth consecutive intercollege victory. The pressure is high, but their will to win is unshakeable. Mizoguchi told us, "The team's policy is for all team members to participate in daily practice. Teams at some of the top schools just have their regulars practice while everyone else picks up the balls or does other errands, but at Waseda we all practice, so we get along and enjoy ourselves. This also helps our teamwork."

Since starting softball in elementary school, Mizoguchi has been active at the forefront of competitions. Conversely, Yamaguchi switched from baseball after entering Waseda. The differences between the two are harnessed in the roles they play in the team. Yamaguchi explained, "I work to cheer on the players that won't get to appear in the games. I myself spent a long time on the bench, so I understand how they feel. By doing my job as sub-captain and taking care of the players, Captain Mizoguchi can concentrate on managing the team and on strategy."

In preparation for the intercollegiate championship in August, the Waseda University Softball Team is engaged in vigorous practice as one body. The words of Captain Mizoguchi are heartening: "I want us to do just as well as all the team members and fans expect us to do." 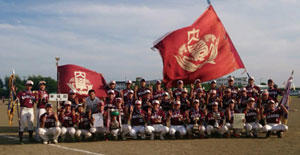 All-team practice is conducted approximately three to four hours per day, but virtually all of the members also engage in several hours' of independent practice. Practice is held on the Tokorozawa Campus, but the members studying on the Waseda Campus practice during their free hours on the tennis courts of the Kikui-cho Campus. Mizoguchi's hobbies include fishing, while Yamaguchi's are mountain climbing and cycling.