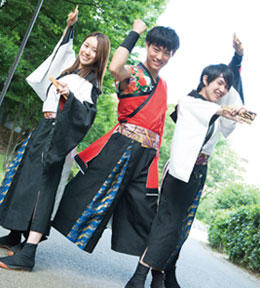 "Ha, soiya!" dancers in vivid colored clothes called out loudly as they performed their dynamic dance--the three students were instantly enchanted by the dance performance that they saw for the first time at their freshmen welcoming party. "Expressively shouting at the top of your lungs and dancing up a sweat--I was impressed by the Waseda-like energetic dance performance and decided to commit my university life to dance performance," says Takahiro Kawashima, deputy manager of the dance club, looking back on his freshman days. Having never experienced a Yosakoi dance festival, Shoko Shibata says she was so nervous she was shaking at her first performance. But, fascinated by Yosakoi dance performance, now she says "I have a wonderful time every time I participate in a Yosakoi festival."

In Yosakoi festival competitions held across Japan, where many company and private teams compete, the Odori Samurai make their presence felt by expressing powerful emotions with their voices. The dancing club received an Excellence Award at the National Yosakoi Competition in 2013 and a Special Judges' Award at the Kochi Yosakoi Festival in 2014. This year, the club will participate in festivals across Japan by dancing under the theme "Burning Passion." "We would like to express our gratitude to those who organize the festivals, the audiences, and the supporters of the Odori Samurai, rather than just dancing to win awards," says Atsushi Takagi, Club Manager. Dancing passionately to express their gratitude--their performance will likely attract public attention this summer as well. 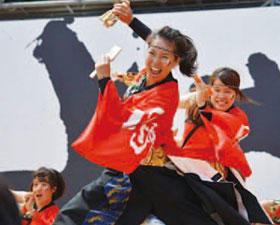 Born in Tokyo. Graduated from the Third Senior High School of Nihon University.

The Odori Samurai is a large dancing club with approximately 200 members. The themes of the dances that the club members perform throughout a year is determined mostly by third-year student members, while the costumes, songs, and choreography are designed by a team in charge of each. The dancing club participates in festivals held in about 20 areas across Japan, from Hokkaido in the north to Kochi, home of Yosakoi dancing, in the south every year.

Festivals the club will participate in this year (in Tokyo)