The key team members of the national university championship-winning Table Tennis ClubLead the team once again to glory this year! 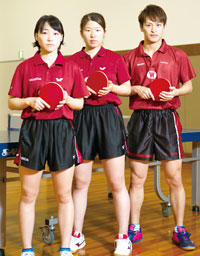 Since entering Waseda University, Yui Odono and Yume Takahashi, winners of the women's doubles division of the 81st National Intercollegiate Table Tennis Championship (hereafter, the "Intercollegiate Championship"), and Yuya Oshima, winner of the men's singles division of the 11th National Student Invitational Table Tennis Championship (hereafter, the "Invitational"), have spent their days in single-minded pursuit of table tennis. Reflecting on the championship victories they have achieved, the trio says that despite feeling the pressure, they experienced few hardships. Odono told us, "I first teamed up with Takahashi last year. After winning the Autumn Kanto Students League Tournament, we also won the Most Valuable Pair Award just before going to the Intercollegiate Championship, so we've been able to enjoy playing each game without stressing out." Takahashi offered, "I think we were able to clinch the finals because we had often fought close games before then and won our way through, so we were able to go to the finals with confidence." Oshima said, "At the Invitational, the top 16 Japanese athletes at the Intercollegiate Championship and skilled international students can participate. I wanted to pay back my coach from high school who came to cheer me on, so I'm really glad I won."

For all three, this year marks their last tournaments as students. In order to achieve their goals, cap their student careers with a crowning glory, and graduate without regrets, they vow to do their best at their respective championships. 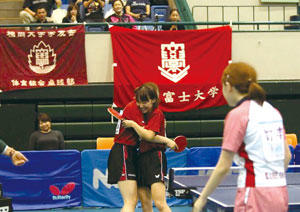 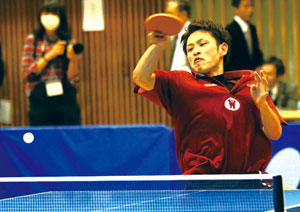 Originally from Kanagawa, Odono graduated from Yokohama Hayato High School.
Odono is the women’s captain of the Tennis Club.

Originally from Kyoto, Oshima graduated from Higashiyama High School.
He was selected for the 2015 men’s National Team.

After graduating, Odono and Takahashi plan on joining a corporate team, while Oshima intends to continue pursuing table tennis as a professional. Their future goals include successively winning the Group Division of the National Collegiate Table Tennis Championship (Odono and Takahashi) and participating in the Rio Olympics (Oshima).