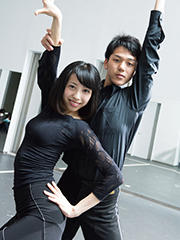 Raito Yokoyama, who had played basketball in middle school and high school, decided to join the Waseda Ballroom Dance Club after experiencing dancing at an event welcoming new students. Chisato Oyama, who started ballet at three years old and has experience in jazz dance, hip-hop and other types of dances, joined the club in her sophomore year to take on new challenges. They advanced to the final stage of the Samba category of the Japan College Ballroom Dance Competition just two years after starting ballroom dance.

"What's difficult about the Samba is to make a unique wavy move called "bounce action" and express the worldly outlooks of a man and a woman. When I wasn't attending my classes, I spent almost my entire time practicing dance," says Yokoyama. "How I use my hands to lead or follow a partner can either positively or negatively affect my partner's moves. My goal was to enhance this technique so that both my moves and my partner's moves could be significantly amplified," explains Oyama.

Originally from Tokyo. He graduated from Sugamo Senior High School.