Taking the first step towards her dream of helping solve international issues!Appearing in the model U.N. in New York

Head of the Japanese Delegation to the National Model United Nations 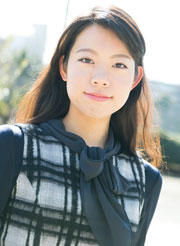 Some 5,000 students from around the world gather to participate in the National Model United Nations in New York, U.S.A. Each participant serves as a representative of a U.N. member nation or NGO to simulate a U.N. session discussing real international issues.

Eriko Kawashima, who says she's wanted to participate in the Model U.N. since high school, became a member of the Model United Nations Waseda Branch immediately after entering Waseda. Kawashima works to improve her skills at writing in English and giving presentations, and also participates in workshops sponsored by the real U.N. After following the advice of a current U.N. staff member, Kawashima easily passed the screening committee to become a member of the Japanese Delegation and, after six months of preparation, stood on the stage she had so long yearned for.

"The Model U.N. isn't a debate. The most important thing is to respect each other's opinions as you work towards reaching a holistic resolution. Having said that, while the participants from each country are amazingly good at speeches, they're not so good at listening to people," says Kawashima with a laugh. "I learned the importance of also making one's own ideas attractive and appealing in order to get the agreement of as many people as possible."

Having achieved her goals of winning both individual and delegation awards, Kawashima says she would now like to change the real world in a visible way. Kawashima continues to advance steadily towards making her dream of helping solve international issues a reality. 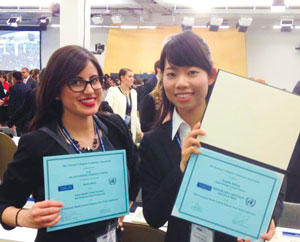 Originally from Saitama, Eriko Kawashima graduated from Shirayuri Gakuen Senior High School. Kawashima was one of nine selected for the 31st Japanese Delegation to the National Model United Nations in 2014 and participated as the ambassador to South Africa. She won the Outstanding Position Paper Award individually and the Honorable Mention Award as part of the Japanese Delegation. Kawashima’s method for improving her English is to talk in front of people numerous times to get used to doing so. “I’ve never studied abroad but, even so, I did it, so I think people who aren’t confident speaking English shouldn’t let the “English barrier” stop them from taking on the world.”