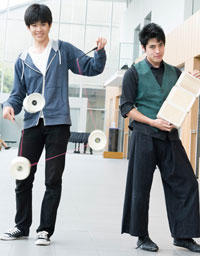 Juggling--familiar to everyone as a performance art. It is also gaining interest as a competitive sport, with international tournaments now being held. Yosuke Akiba, secretary-general of the Waseda University Juggling Circle Infinity, specializes in a form called diabolo, while 2014 vice secretary-general Yusuke Inaba specializes in cigar box juggling; both have won prizes in numerous juggling tournaments.

Speaking of the appeals of juggling, Inaba told us, "You have to think about music and your performance, and create a roughly 6 minute stage. I really enjoy that creative side." "It's a relatively new sport, so you often create your own tricks, and I enjoy having this freedom to develop new things," Akiba offered.

"Juggling is still a developing sport in Japan, so there're no manuals or coaches. You have to learn everything on your own, and that can be difficult sometimes," the pair said. Both, however, treat juggling as no mere hobby, and are intent on further improving their abilities. "I practice 5 hours a day before tournaments," said Inaba, while Akiba told us, "I keep open blocks in my school schedule and use them for practice time."

After graduating, Inaba intends to go on to graduate school, and Akiba is aiming to become a high school teacher. They both plan on continuing with the juggling they love. Akiba says the trick to continue being able to enjoy it is easing up a little sometimes so you don't overdo things.

Both graduated from Waseda University Senior High School. Both also began participating in juggling competitions in high school. Their major achievements include second place in the Men's Individual Diabolo Horizontal Axis Division at the fourth Japan Diabolo Association Tournament (Akiba) and first place in the Men's Individual Division at the second Kanto Student Juggling Tournament (Inaba). Their future goals include creating a perfect environment for jugglers to practice (Akiba) and appearing in the individual division of Japan's highest level tournament, the Japan Juggling Festival (Inaba).