"Establishing the LGBT* Student Center at Waseda!"Winner of the President's Award in a student competition

"I feel uncomfortable going through physical examinations when we are divided based on biological gender." "Professors and classmates hurt me with their discriminatory remarks." A student group, "Diversity Waseda," heard such anguished voices of LGBT students and proposed that Waseda University build an LGBT student center to help them enjoy campus life without facing adversity and discrimination. In March, this student group won the President's Award in the third "Waseda Vision 150 Student Competition," which is the best of the best awards in the final round. 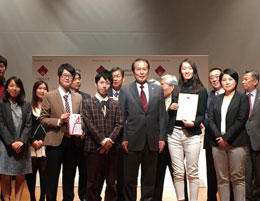 "I was thrilled when our team managed to get an overwhelming number of votes from visitors among the final eight, which impressed upon us that we were able to convey our message," says Itsumura. "We took action in an empathetic response to many of Waseda University's faculty members who raised questions on the issues of gender and sexuality. The university also heard our opinions in an appropriate manner. We felt lucky to be in an environment where the university and students can mutually engage one another," says Watanabe.

Both of them regard the award as a starting point rather than the end goal. "We will mobilize interested students to make our proposal a reality." (Watanabe) "We want LGBT students to know that 'many members of Waseda University are willing to come together to think about issues.'" (Itsumura) They are already moving forward toward a new goal.

* LGBT is acronym that stands for lesbian, gay, bisexual, and transgender. In Japan, the term is interchangeably used with homosexual females and males, and bisexual individuals in reference to anyone who pursues a life not necessarily in conformity with their legally or socially assigned gender at the time of birth. They are also known as a "sexual minority."

Ms. Itsumura from Aichi Prefecture is majoring in the history of Western art after having graduated from Aichi Shukutoku High School.

Mr. Watanabe from Tokyo is a graduate of Meiho High School. They represent “LGBT Youth Japan,” a volunteer group.

A team of four members, which included two alumni who graduated in 2014, participated in the third "Waseda Vision 150 Student Competition." Having interviewed LGBT students and relevant people from other universities, their presentation based on thorough data collection and analysis won the President's Award.