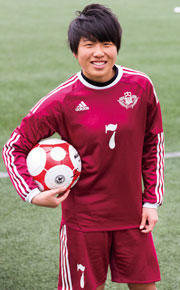 "What I enjoyed most was kicking the ball," says Japan national under-23 team player Hikari Takagi with a nonchalant smile, discussing the joy of playing when asked about her days as an elementary school student--the time she first started soccer. She became obsessed with soccer after the Japan-Korea FIFA World Cup in 2002, and since that time she continued to compete at the top levels in Japan through junior and senior high school.

Since entering Waseda, she has frequently toured and trained overseas as a representative of Japan and Universiade competitor, in addition to her activities in the Waseda University Association Football Club. "But I don't think I'm too busy. I like having a packed schedule. Touring overseas feels unreal, because I make so much progress on areas I need to improve on," she says cheerfully. "When I can't attend classes, I keep in touch with my professors and submit my reports or whatever while on tour. I'm taking a sports business marketing seminar, and this year I'm planning on writing my graduation thesis on a purchase survey of spike shoes for women." As you can see, Takagi also takes her studies seriously.

"My goal is to see the Waseda team be the number one women's university team in Japan, something it has never achieved before. I'm certain that we'll see results if we just work hard, and doing so will also help me in terms of growing as a player. I want to give it my all no matter what area of my life." 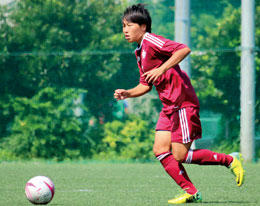 Originally from Shizuoka, Hikari Takagi graduated from Tokoha Gakuen Tachibana Senior High School. She is both one of the members of Japan’s national under-23 soccer team and a participant in the women’s Universiade. Her position on the Japan under-23 team is as a mid-fielder—someone who tries to create opportunities to go on the offensive. Her major successes as part of Japan national teams include finishing second in the 2010 FIFA U-17 Women’s World Cup and placing third in the 2012 FIFA U-20 Women’s World Cup. Her favorite soccer player is former England representative Steven Gerrard.