Three regular top place finishers at national championshipsDoing their all to keep the beach safe! 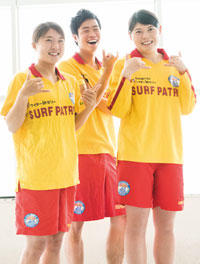 They get out of bed at 3 a.m. almost every morning. Each day they attend university classes after training at the Shonan Coast. "It's cold in the winter but fun," say Reina Oyama, Tsukasa Sakakibara, and Rui Takashiba while exchanging smiles. These three are top lifeguards who consistently take top places in national lifesaving tournaments, where participants compete by doing activities related to lifesaving and the prevention of drowning accidents.

"Our mission isn't to win competitions but rather, through competition, to increase our abilities to save lives and give this back to people using the beach," said Sakakibara. During the beach season, the three actually travel to observe beaches throughout Japan. Oyama told us, "Our number one job is to prevent accidents. We always focus our whole attention on the state of the waves, how beachgoers are doing, and the movements of other lifeguards, etc." "In addition to lifesaving activities, we also help lost children and injured people, provide education on waterfront safety, and help clean the beach. Our activities cover a lot of group, so we can utilize our own specialties; I also like the fact that the harder you work the more you can help people," said Takashiba.

This year, the W.L.S.C. is aiming to win the intercollegiate championship while continuing their activities at beaches everywhere. "Two years ago, we only had seven people but won the overall women's competition. I would like to win it again this year, which marks the 30th anniversary of the establishment of our club," said Oyama. 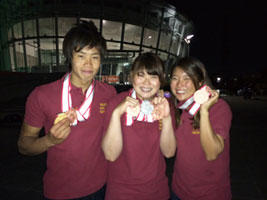 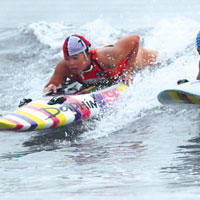 Originally from Saitama, she graduated from Sayamagaoka Senior High School.

Oyama switched from swimming to lifesaving in high school, while Sakakibara and Takashiba did the same after entering university. Competitions are divided into ocean and pool divisions, which in turn are comprised of various events such as the "run/swim/run" event held at beaches and races using paddle boats actually used for lifesaving.