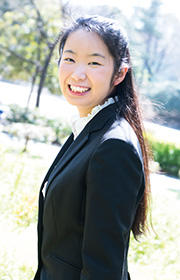 Kana Ichikawa is a regular in the top rankings of nationwide Japanese calligraphy tournaments and a truly skilled calligrapher. In 2014 she took the second place Japan Budokan Chairman's Prize in the university student division at the 30th Prince Takamado Trophy Japanese Calligraphy Budokan Handwriting and Calligraphy Exhibition. Participants of almost any age can participate, from children to 90-year-olds. Ichikawa tells us this contest is very important to her. "I've been participating since my first year of elementary school, so I'm very happy to have won a prize. I started studying calligraphy in kindergarten. I've enjoyed the process of becoming more and more skilled, but I was only able to keep at it thanks to the people who supported me such as my friends, passionate teachers, and encouraging family.

Through calligraphy, Ichikawa has come to feel that "living is to continue learning," and chose to major in Life-long Education in the School of Education. "There's a phrase that 'teaching and learning are of a kind.' In my own teaching training, I have often experienced being taught by the people I am teaching and felt both the teacher and those being taught growing together."

Ichikawa told us, "My target is everyone. Teachers, classmates, juniors, everyone has something to be respected. Going forward, I will keep author Eiji Yoshikawa's words, 'everyone other than myself is my teacher,' close to my heart and treasure not only calligraphy but also an attitude of continuous learning. " 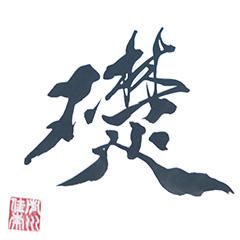 Originally from Tochigi, Kana Ichikawa graduated from Utsunomiya Girls’ High School. She is a member of the official Waseda Calligraphy Club. Ichikawa has won numerous awards, including the championship cup for her year at the 30th National Student First Calligraphy of the Year Exhibition in her third year at university. With her second place finish in the recent Prince Takamado Trophy, Ichikawa was awarded the 2014 Waseda Student Culture Award. As part of participating in contests and exhibitions, Ichikawa has sometimes spent her time writing in calligraphy classrooms from 9 in the morning until night. Her hobby is visiting museums, and her favorite is the Aizu Yaichi Memorial Museum, which contains a variety of excellent art pieces and rare letters. The picture is a piece Ichikawa drew in her first year at Waseda.