A top soft tennis playerAiming to win international tournaments and the intercollegiate championship! 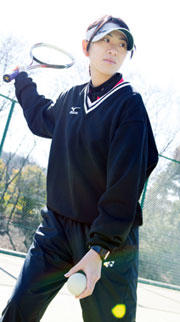 Nao Kobayashi has represented Japan in the sport of soft tennis since she was in high school. She helped achieved successive wins in the mixed doubles/team categories at the 2012 Asian Soft Tennis Championships and the 2013 East Asian Games and, although suffering a disappointing loss to Korea in the finals, helped Japan to get the silver medal at the 2014 Asian Games. One can glimpse Nao's powerful will amidst her subdued retelling of the events. "Unlike the Japanese competitors, the Korean athletes actively attack even on a backhand. Every match with the Korean team is a hard fight, but I'd like to win in my next one against them," says Nao.

Nao began playing soft tennis as a first grader in elementary school. Since that time she has made many outstanding achievements, including a national championship. "Under the pressure of the need to win the next match, I've thought about quitting countless times." In spite of this, Nao says she has become able to play with a positive outlook as she competed against veteran opponents in international tournaments and engaged in independent practice through the Soft Tennis Club. "In doubles, you can encourage each other when it gets tough, and it's fun getting a point together."

Nao says she'd like to become a nurse after graduating. This year marks her last competing in soft tennis. "I'm aiming to win in doubles at an international tournament. Last year I was really disappointed when we lost in the intercollegiate championship to Nippon Sport Science University, so I definitely want to win the championship this year." 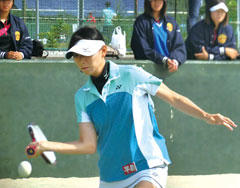 Born in Okayama, Nao Kobayashi graduated from Jinsei Gakuen High School. She was influenced to pursue soft tennis by her mother. Nao began living on her own after entering university, and prefers to cook for herself, striving to make nutritionally balanced meals. Her specialty is hamburg steak. As part of her seminars, she is engaged in research concerning the motion analysis of racket sports under Professor Kazuyoshi Seki. Outside of class, Nao engages in a hard regimen of soft tennis practice and once per month week-long training camps for athletes representing Japan internationally. She is scheduled to participate in the 2015 World Soft Tennis Championship.