Currently aiming for the top 10 in the world ranking!Giving 100% every day in both skating and studying 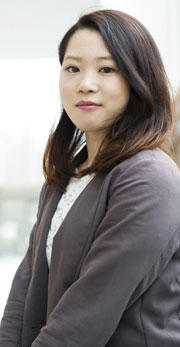 Moemi Kikuchi is a short track speed skater. She spares no effort in her classes, which are scheduled for five days a week from the first to the fourth period, and even attends a seminar despite the fact that she is very busy with her frequent overseas trips on top of her day-to-day training as a national elite athlete. "As a student at Waseda, I want to do my best in study too [since it is one of Japan's leading universities]. I want to do everything I can do within the restrictions I have in terms of time and facilities."

However, juggling her sport and studies is a difficult task according to Moemi, and she says "90 percent of skating is hardship." The thing that has motivated her to continue skating despite such circumstances is the encouragement she has received from her family and people close to her. "For a long time, skating has been a thing I was obliged to do. But one day, because I realized that support from people around me had given me the strength to keep engaging in skating, I want to repay their support by doing well as a skater. And that means I must win races." Moemi has a clear-cut vision for the future. "I have set my sights high. My goal is to win a medal in the 2018 Pyeong Chang Winter Olympics. In order to achieve this, I want to earn a spot in the top 10 in the world short track ranking within a year. My thinking is that the best way to fulfill a goal is to bring out your strong points. I'm eager to build up my strength to the point that I will be second to none." 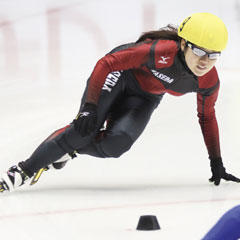 Originally from Nagano, Moemi Kikuchi graduated from Nagano Prefectural Nozawa-kita High School. She grew up in a skating family, with four out of the five daughters currently being successful skaters. Her achievements include taking gold in the Women's 1,000 m in the All Japan Single Distances Short Track Skating Championship and being chosen as a member of Japan's national short track team for the 2014 Sochi Winter Olympics. She is a member of the Waseda University Skate Club. She not only goes running before going to university but also does training after classes. With such a busy schedule, Moemi finds the best way for her to take a break is to have her hair done by one of her sisters, who is a hairdresser.