Giving Shape to Our Awareness Using Photos and Films

Studies of Space and Images (School of Social Sciences Seminar)

This seminar by Professor Yoichi Sato--who is researching "urban space" through the keywords "photography" and "films"--has students in three different years, from second-year students to fourth-year students. Professor Sato, who instructs students in his class in a strict manner as a "sincere scholar," does not have the scholastic rigidity often associated with university professors, and actually is a friendly, approachable teacher to whom students can feel close.

The seminar revolves around fieldwork using photos and films, the first step of which is for students to establish themes for themselves. We are allowed to select any themes we like, and create our works and papers to present them in the "Research & Project Exhibition," which the seminar hosts every February. This allows us to learn the basic skills required for photography and filmmaking, while requiring us to sharpen up our awareness of the issues involved in the themes we have chosen and translate our themes into tangible forms that can be shared with others.

What we are doing right now is selecting materials to create works under the title"My 100." Higa is collecting 100 pamphlets and catalogues of her favorite movies while Adachi, who plays the violin, is gathering 100 photographs of orchestra scenes viewed from a violinist's perspective. We are going to annotate and present them. In the past, we have also interviewed people working for Tsukiji market, which will soon be relocating, and have compiled these interviews into a film. In doing this, our aim was to show these people as they are, as natural and relaxed as possible, by filming what newspapers, TV news, documentaries or other media could not film, in other words only what students could film.

As we are required to exhibit our graduation theses and works as well, we will have to put in some creative ideas to make them appealing to visitors. We are making preparations under themes like "Urban Space of Fujisawa City as A Tourist Destination" and "Roles and Interactions of Libraries Depicted in Movies and TV Series," in a course in which we are learning--through repeated trial and error efforts--how we can communicate our thoughts to others and how we can make ourselves understood by society. 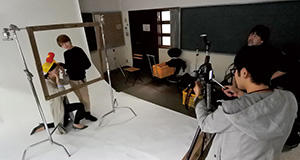 Students taking photos to be used for exhibition invitation letters