A lesson where you can enjoy learning French language and culture

Mayu Tamura／2nd year student at the School of Education
Jun 1, 2015

In Professor Ikuhiro Fukuda's Basic French H, the focus is on intuitive acquisition by learning French through listening and practical use through conversation. Not only is grammar explained, but by studying communication at the same time, you can learn French that you can use. Also, the study cycle is simple to grasp, after studying one unit, you are given a topic and tested on it. You don't go to next step without understanding everything.

At the start of the lesson, Professor Fukuda talks about various aspects of France based on his own experiences, which is also one of the attractive points of the course. For example, his talk on dinnertime in France starting around 8 o'clock, later than Japan, and a long time spent on meals, was very interesting and informative. Before studying a foreign language, I think that learning the culture in the background of the country of that language is extremely important and a meaningful time.

I really like France, so I chose French. I am fighting a tough battle with French pronunciation, but Professor Fukuda teaches French pronunciation in a Japanese style, so I am enjoying studying it. Also, this lesson has reminded me that, in languages, listening to it and using it yourself is more important than anything else.

I am going to continue studying French so hard, when I eventually go to France, in order to put the French I have learnt, even if just a little, to use.

My textbook has been used well over the year. 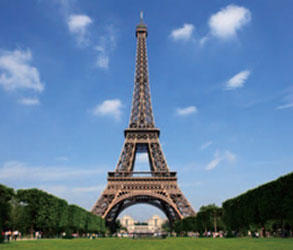 I have always wanted to go to Paris soon.

Mayu Tamura／2nd year student at the School of Education